The Hall Configured for Mozart 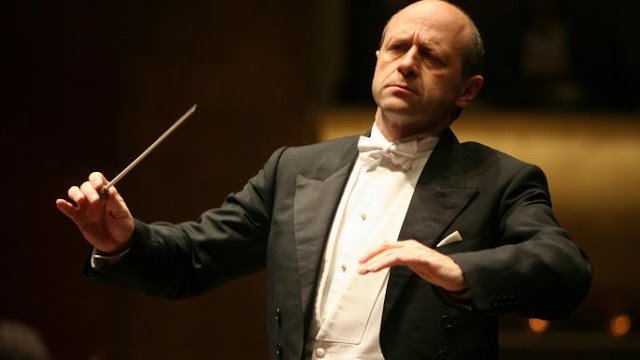 It wasn't just the program: a brief but satisfying blend of Beethoven and Schubert. It was the presence of frequent MM guest Iván Fischer, who, for a number of seasons has enlivened that summer festival by bringing his orchestra charges: the Budapest Festival Orchestra (an ensemble he founded and still currently leads) to play symphonies and operas at Lincoln Center. Here, Fischer found himself at the helm of the New York Philharmonic, but wasted no time in ensuring that this was a very different kind of concert.

At Wednesday night's concert, the orchestra into a configuration that seems popular with Hungarian orchestras. The double basses, normally stage left, were dead center, and upstage above the rest of the orchestra. Horns were pushed to the right, trumpets and timpani to the left. The cellos, which have enjoyed new prominence this season with their standard seating moved to the lip of the stage on the left, were now on the right, their place taken by the second violins.

The change in sound was clear from the first notes of the Schubert Symphony No. 5. Like other early Schubert pieces, this symphony looks forward and back, to the strict forms of classicism and the more erratic Romantic era that he helped usher in. Fischer kept the music flowing in a light and playful performance, spinning out the gossamer orchestration with an agile flick of the wrist.

The orchestra was greatly expanded for the next piece. This was a New York Philharmonic premiere: Frederick Reinecke's radical re-orchestration of the Schubert cantata Die Hirt auf dem Felsen ("The Shepherd on the Rock.") In addition to the extra strings and woodwinds, the piece called for a clarinet soloist and a soprano. These roles were filled by Philharmonic principal player Anthony McGill and soloist Miah Persson.

Personn's dry, slightly flinty soprano soared to the heights in this poem of isolation, closely followed by McGill's nimble clarinet. The two voices chased each other across the treacherous rocks of the score, from the slow beginning to the quick and dangerous passages at the end. However it was the clarinetist who had the final word, tossing off one last charming run of notes as Fischer brought the whole to a close.

The cliché about Beethoven's Symphony No. 4 is that it is a flyweight work that interpolates itself between the Eroica and the famous fate-driven Fifth. It often appears on a program or CD with one of those other works, or gets lumped in the "light classics" division with the First, Second and Eighth. However, Fischer and the orchestra approached this work on its own merits, breaking it free of such tired musicological musings to deliver a joy-driven performance.

The opening chords birthed a sprightly figure in the violins. Fischer made maximum use of Beethoven's antiphonal writing for strings and brass, having the two sides of the orchestra do four movements of playful battle. The exceptional clarity and quality of this performance made this listener hope that this conductor comes back to New York more frequently, even if it's only in the summer months. (Reprinted by permission of Superconductor.)