Tom Hanks and Unknowns Battle on the High Seas 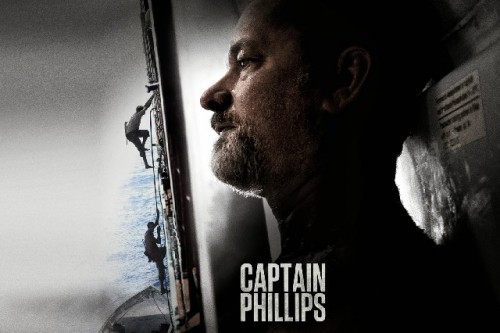 Another hit for Tom Hanks. 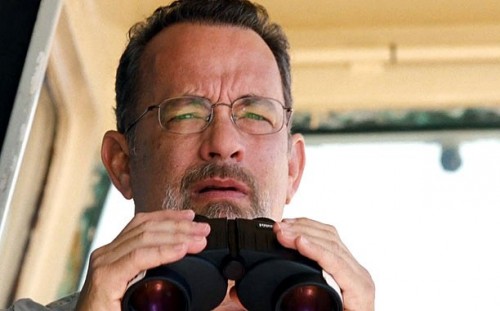 The watchful Captain Phillips is rightly concerned about pursuing pirates. 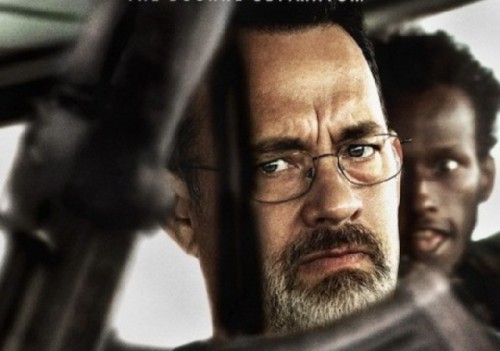 Contending with a hostile takeover of the cargo ship.

Two-time Academy Award winner Tom Hanks, is an amazingly protean actor who apparently can do just about anything he sets his mind to.  From a boyish-looking actor in his first TV series in “Bosom Buddies” to a fine maturing actor in light fare rom/com movies like “Big”; “A League of Their Own”;  “Sleepless in Seattle” and “You’ve Got Mail” to more dramatic films like “Apollo 13”; “Saving Private Ryan”; “Philadelphia” “Forest Gump”, and now  “Captain Phillips”.

His films over the years have grossed over $8 Billion worldwide making him the highest all time box office movie star.

The proof of his incredible acting skills and winning style is once again put to the test in his latest film “Captain Phillips” playing the real-life skipper of the merchant ship Maersk Alabama that was hi-jacked in 2009 by Somali pirates.  Directed by Paul Greengrass (“Bourne” franchise helmer) with a screenplay by Billy Ray, based on the book “A Captain’s Duty: Somali Pirates, Navy SEALS, and Dangerous Days at Sea” by Richard Phillips, and Stephen Talty is a high-octane action film that keeps its audience riveted to the screen throughout its 2 hour 15 minutes running time (I think it could lose 12 minutes and still hold everyone’s attention, it’s that engrossing).

As good as Hanks is, and he’s very good, he shares the screen with first time actors: Barkhad Abdi as Muse, the leader of the pirates; Barkhad Abdirahman as Bilal, the loose cannon of the four, Faysal Ahmed as Najee, and Mahat M. Ali as Elmi, the teenaged pirate. The quartet of first time non- actors, so to speak, were cast as a result of answering a newspaper casting call for Somalis to appear in a movie.Auditions were held in Minneapolis/St Paul, home to the largest enclave of Somalis living in the USA.

The movie is based on “real events” which is an important code word used in Hollywood when a dramatic makeover takes place; sometime trumping what actually occured.

After the movie was released some of the real crew groused that the events didn’t quite unfold as portrayed in the film, going on to say, that the Captain comes out as too much of a hero.  Ah, there’s nothing Hollywood enjoys more than a little controversy as a way of ramping up the publicity machine.  Despite the chatter from outside forces, “Captain Phillips” is still a riveting, splendidly acted, and well crafted film about piracy on the high seas.

The story of how the Maersk Alabama Skipper and crew vs. Somali pirates resolved this “incident movie” is in the details of how brilliantly director Greengrass and his crew recreate and capture the essence of piracy at sea. The film vividly depicts the inherent dangers lurking off the Somali coast.

There is riveting suspense and danger involved when the ship is boarded by the pirates as they search for the ship’s crew.  They push the intensity level to the max leaving little room for exhausted patrons to regroup before exiting the theatre.

The Somali pirates have such wonderfully expressive faces and render their scenes with Hanks and each other with frightening reality.  As usual, Hanks delivers the goods in spades with consummate skill, possibly garnering another Oscar nomination in the effort.

His scene following his rescue in the ship’s medical quarters is possibly the finest portrayal of a man coming out of shock and his attempt to figure out what has just taken place. This is both stunning and mesmerizing. It alone is the worth the price of admission.

If you have wondered why movies today cost so much to make consider the following:  “Captain Phillips” involved over three hundred actors, writers, and technicians, etc. in the making of the film.  There are 111 visual artists, 81 camera and technician employees, 44 sound department crews, just for starters.

When one adds the stars’ salaries to this production and then add million dollar plus marketing campaigns to the mix, well, now you have some idea of why movies cost so much.  The upside to all this back-story about production costs comes down to this.  The cost is well worth the effort.

Director Greengrass has delivered one heck of an exciting and entertaining movie.