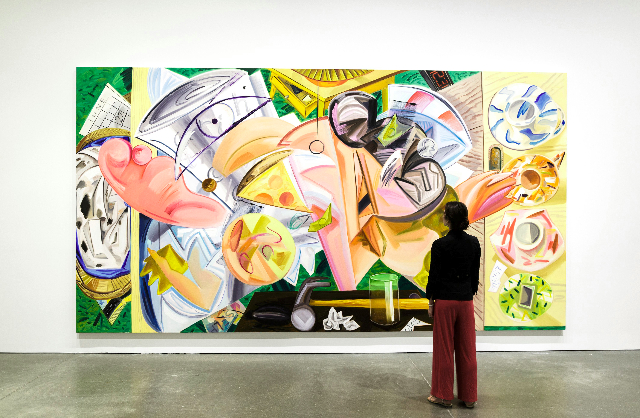 Around the time I was trying to sort out the clutter of paintings qua sculpture at MassMoCA for a blog post, I received a self-published book from the gallery owner, Paul Rodgers, on his theories of the origins of 20th Modernism. Looming large in his story of the Genesis of the Modern is Barnett Newman. Recently, as I started to put together a critique of Dana Schutz’s work at the Boston ICA, the artist Jeremy Gilbert-Rolfe emailed me an article that he published in a collection of essays called “Contemporary Visual Culture and the Sublime” published by “Routledge Advances in Art and Visual Studies”. He had been sent my article on the end of Zombie Formalism by the artist Chris Haub, and reached out to me to share what he thought was the complementarity of our ideas on the state of contemporary art.

In Gilbert-Rolfe’s essay, Newman also comes across as an important figure in establishing the metaphysics of Modernism. Newman had never been for me a conscious influence on my painting nor for that matter someone I was excited about. I do recall the painter Don Shambroom being an enthusiast of his work. Don is a figurative painter, although lately his work has shown a more conceptual strain. That has not stopped him from often providing some of the best commentary on Abstraction of any painter I know and on my work in particular. He remarked at the time on how a Newman painting could dominate the gallery space and in so doing affect powerfully the consciousness of the viewer.  Like Rothko there is a religious import that sees the work of art as creating an architectural space similar to a chapel.

The journal in which Gilbert-Rolfe wrote his essay contains fifteen essays by other writers on the Sublime and lack thereof in contemporary art. Much of Gilbert-Rolfe’s essay deals with the structure of the art world: artists, gallerists and museums that all seem to be working under the aegis of a seamless Hegelian structure where to quote the essay “painting is the readable part of a system and causes no bodily surprises.”

This stood me in good stead when I was perplexed over any justification for the work of Dana Schutz being given a show at the Boston ICA. Until the brouhaha over her painting of Emmett Till in the Whitney Biennial I had not heard of her work. The over explained show at the ICA presents her as being an important presence in the art world for quite sometime. Gilbert-Rolfe’s essay gave me a handle on the work. He says: “Inside the museum what the work must be about is closely controlled. “ “Hegel is invoked but there is little dialectical contradiction to be seen.”

Each painting is given an extensive explanation as to its message. Typically, large shows like this provide the viewer with a long description at the beginning and maybe one at the end but rarely does each painting get such in depth analysis. Many of the paintings deal with social conflict, which of course was the story behind the Emmett Till piece not exhibited here. However, to lean on Gilbert-Rolfe’s citation from above, ”... there is little dialectical contradiction to be seen.” There are no ”bodily surprises.” There is an attempt to express the impact of conflict via a cubistic language that breaks up the picture plane but that is it.

Unlike a great artist like De Kooning there is no pushing of cubism into a new territory. Here is a person with no doubt, no second thoughts as to the efficacity of her work to convey its intended meaning.  The colors are thinly applied with no admixture. The, often effaced faces, deny the viewer an extra level of meaning that could be conveyed so that the overall event might be grounded in private experience. In one of the explanatory panels, references are made to Gericault’s “Raft of the Medusa”. That painting of course functions on several levels where in fact there are faces that convey the personal horror of it all.

Could it be that her view of mankind is so dictated by social media in which the system is so much larger than the individual as to render any part/whole dynamic irrelevant. There is in most every painting a cubistic whole implying a sort of topsy-turvy worldview but the cartoony faces give no inkling of an inner life. I guess I get into murky waters when I fault her for what may be the meaning of the individual effaces that sag or our effaced. It is Dasein without the Da. Mediated faces that have lost their immediacy. Is this the message of the show: in our modern world there is “No dialectical contradiction”?

Artists like Ernst Kirchner or Max Beckmann, who seem to be her antecedents, despite the overall cubistic disarray ground their paintings in the here and now. In the case of Kirchner you have the strange colors distorting the faces that provide the shiver of existential angst. In Beckmann the very non-generic faces seem borrowed from the intensely focused portraits of August Sanders. In Schutz I see this lack of grounding in specificity as either a cognitive defect or the outcome of contemporary fatuousness that gets its sense of the real from Facebook.

Schutz is the “readable part of the system and causes no bodily surprise.” One might think that painting would retain its role in society as a locus of intense emotional and metaphysical surprises that still matter to the individual in a society where we all in some way have a role of supporting  highly efficient social functioning.

In this show the emptiness of social functioning has leaked its way into the consciousness of Schutz. No wonder the Black community protested her use of the photo of Emmett Till. Here was in an iconic image of an event that represents the black’s struggle against the violence of Jim Crow and in no way could be dealt with effectively with the squishy visual language of Dana Schutz.