The Band's Visit on Broadway

Popular Musical at the Ethel Barrymore 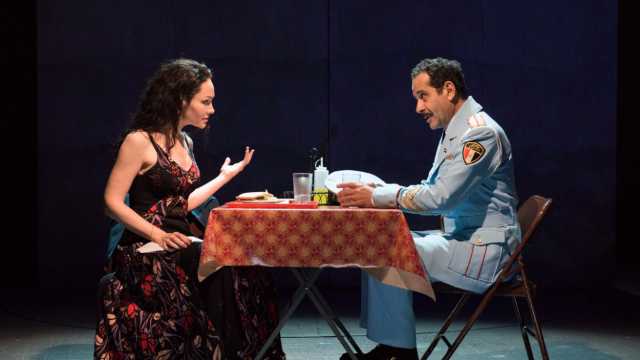 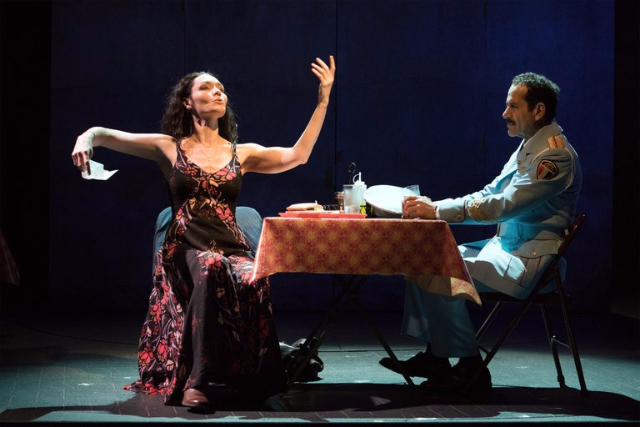 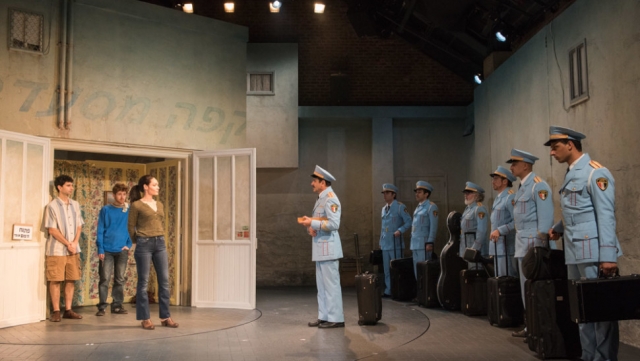 The Broadway shows Come From Away and The Band’s Visit offer hope  that goodness still exists within humanity during a time when cynicism, division and hate seem rampant.

The Band’s Visit is a gem of a heartfelt, emotionally-complex musical which recently opened on the Great White Way. It bares similarities to Come From Away. Both shows, which are among Broadway’s toughest tickets, along with Hamilton, feature good-natured folks. They are willing to help fellow human beings during a time of need.

Come From Away, based on a true story, centers on the kind folks of Gander, Newfoundland in Canada. They opened their homes and hearts to airline passengers whose planes made emergency landings at Gander’s airport following the Sept. 11 terrorist attacks. The passengers landed at an airfield unequipped for 38 planes worth of stranded passengers. But the souls of the town’s residents proved much bigger than any cramped space.

Like Come From Away, The Band’s Visit possesses heart and soul in huge quantities.

The latter, based on a 2007 Israeli film, contains some of the most tender, romantic songs written for the musical theater stage in quite a while. They’re on par with music from the 2016 film La La Land.

The Band’s Visit’s score, with music and lyrics by David Yazbek, beautifully evokes a sense of place and mood. It also sensitively captures the deepest thoughts and feelings of the well-drawn characters.

There’s a relaxing, healing quality to the music that will caress, stir your soul but hardly lull you to sleep. You’ll find yourself fully awake and growing increasingly refreshed. The shimmering beauty of the music and the sensitive, vividly descriptive, poetic and sensitive lyrics have that affect. The music, and the show as a whole, will re-awaken you to the power of a kind word, a thoughtful gesture, and a caring facial expression that can brighten anyone’s day.

The Band’s Visit, with a book by Itamar Moses, demonstrates the profound, positive effect music, art in general, surprising commonalities and empathy can have on two people with seemingly nothing in common. In the show, they are people who met due to a mistake that, in hindsight, feels more like a small miracle. When the tale is over, they can say with certainty that, to paraphrase lyrics from Wicked, because they knew each other, they have been changed for good.

You’ll find yourself nodding in agreement as you wipe away tears (keep a hanky handy; you’ll need it).

Moses deftly mixes wry humor with pathos in this story of an Egyptian ceremonial police orchestra invited to perform at the initiation ceremony of an Arab culture center. It is located in the fictional Israeli town of Petah Tikva.

However, due to a misunderstanding by one of the band members, they land in the small, seemingly humdrum town of Bet Hatikva (rendered by scenic designer Scott Pask with homogeneity and minimalism, making the environs seem rather ordinary).

You get the sense from an early scene that the residents are facing existential questions to which Vladamir and Estragon from Waiting for Godot could relate. But look deeper, and you’ll find signs that a love of life, even in its mundanity, infuses the individuals who inhabit Bet Hatikva.

The town might look like nothing special, but the script suggests otherwise. “Music (plays), as the town appears, in the dawn light, as if from a mirage,” the stage directions read, drawing an inevitable comparison to the mysterious village of Briagdoon, in the musical of that title.

Toward the end of The Band’s Visit, Bet Hatikva “is gone, back into mirage.” However, lighting designer Tyler Micoleau doesn’t suggest that; his effects aren’t surreal, but help create a romantic, dark ambiance. Micoleau has also created some eye-popping, breathtaking effects.

Still, if you wish to view the town from a mystical lens, you could walk away from the theater with the belief that Bet Hatikva is a miracle, appearing from the mist only rarely. From that point of view, it appeared at just the right time – helping the Egyptian travelers and the town’s residents come to grips with issues they’re facing.

Life isn’t issue-free for these characters. Family tensions, at least one long-buried secret and the musical equivalent of writer’s block all come into play. The characters help each other in touching, sometimes surprising ways.

The non-musical portions blend seamlessly into song. Singing seems as natural as breathing for these vocally expressive performers, some of whom skillfully play their own instruments.

As of the reviewed performance, which came close to opening night, the cast had not recorded a CD. The music isn’t as memorable as, say, standards from The Golden Age. Nevertheless, the glorious, delicate score makes owning the eventual CD an easy decision. You’ll want to at least rent the CD to re-listen to the elegant, delicately romantic song “Omar Sharif.” In it, Israeli café owner Dina vividly remembers listening to Egyptian and Arabic programs as a young girl. She vividly recalls the characters even after all these years. The melody to “Omar Sharif” would blend in nicely with music at a massage parlor or during a yoga class emphasizing meditation and gentle movement.

Katrina Lenk, who plays Dina, sings the song with a soft, but clear and audible voice that will embrace you in a gentle caress.

Lenk endows Dina with, at first, a sensuality and wry humor, when the townspeople first encounter the band members. There’s an endearing quality to the manner in which the two groups struggle to communicate and the combined tension and curiosity that’s evident.

Lenk’s Dina eventually melts from wry and sensual to soft-hearted, soft-spoken and sensitive. It’s clear why band leader Tewfiq (Tony Shalhoub) would become attracted to her at first sight. There is an ethereal, kind-hearted quality to Lenk’s Dina that would make her attractive to many men.

Shalhoub impressively captures his character’s modest, somewhat awkward and caring personality. His Tewfiq is only commanding and gruff while dealing with Haled (Ari’El, Stachel). Haled is one of the band members’ well-meaning but impulsive and mistake-prone members.

There’s plenty of talent in this cast, including Alok Tewari as insecure band member Simon, a palpably exasperated and emotionally tense Kristen Sieh as Iris, a fed-up wife in a failing marriage and John Cariani as seemingly aimless hubby Itzik.

In The Band’s Visit, the characters speak English, Hebrew and Arabic (with English subtitles). This, however, is a universal tale; you don’t need to be Israeli or Arabic to connect with the themes.

Book writer Moses doesn’t touch on the Israeli-Palestinian conflict. However, those on both sides, and everyone else in this world, could learn valuable lessons about how we’re more similar than different and how a kind gesture can go a long way. The stage features a turntable device that rotates ever so slowly. Might that suggest improvements in human relations, including in the Middle East, are progressing at such a speed?

This is the type of show that would seem to affect an audience most in an intimate playing space. The musical world-premiered at the Off-Broadway 199-seat Atlantic Theatre Company last year. Critics heaped praise on the show and it enjoyed a sold-out run at the Atlantic. It has moved to the 1,058-seat Ethel Barrymore Theatre.

The feeling here is that a much larger theater would swallow up the intimacy necessary to really move an audience.

At the same time, everyone needs to see this show. If nothing else, they’ll come away with a renewed sense of the inherent goodness in people.

Such a sense is sorely needed these days.