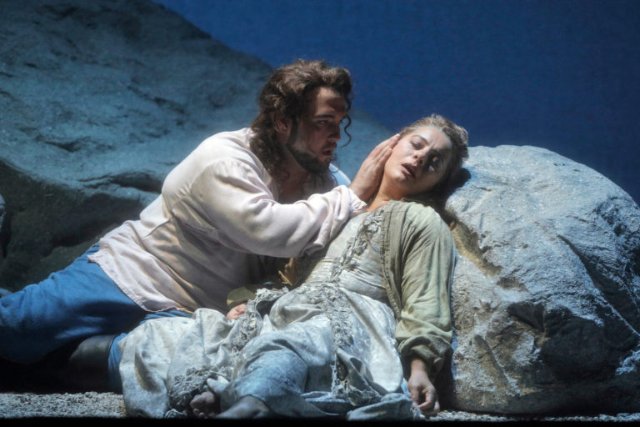 Yes, that classic template is the story of Manon Lescaut, except that we should first add that Manon is being shipped to a nunnery when the courtiers intervene. The older man, Geronte, attempts to abduct her, but the student, des Grieux, beats him to it. When Manon finds living in the style of a bohemian is not to her liking, she is easily lured away by riches. As punishment for her betrayal of Geronte, Manon is exiled to (get this!) the Louisiana desert (?!) where she is joined by des Grieux. San Francisco Opera brings this Puccini opera to the stage for its eleventh time in a handsome production.

Dramatically, the linear plotline is appealing, but it does have an unusual number of jarring jump cuts in the narrative, as if each act were written by a different hand (see a partial explanation later on). As is so often true in opera, love occurs instantaneously, and along with it, life altering decisions. Musically, the opera seems to evolve with each passing act. It contains fewer top-hit numbers than Puccini’s later operas, but it is attractive throughout and does have some real pleasers. Act 1 is light and mostly unmemorable with great involvement of the chorus. The stage becomes less populated as the action progresses until the final act, which is left to the lovers alone. The tone becomes darker, and suggestive of some of Puccini’s later works. Particularly, the strong Act 3 opening scene foretells the last act of Tosca with a sound similar to “E lucevan le stelle.”

Lianna Haroutounian deftly portrays Manon, transitioning through her ups and downs. Her most notable close-ups occur in Act 2 with the beautiful and popular “In quelle trine morbide” and the Act 4 self-explanatory lament “Sola, perduta, abbondonata.” She powers through her vocal highlights with a mellifluous and oft-called-for upper register. Her shortcoming, however, is a bottom that lacks sufficient volume to fill a big house well.

Manon’s lover is the persistent youth des Grieux, played by Brian Jagde, who has become the “go to” Puccini tenor for San Francisco Opera, where he had already sung the lead male roles of Cavaradossi, Pinkerton, and Calaf in three of the composer’s top operas (He has sung Rodolfo elsewhere). His voice possesses strength, flair, and a bit of an Italianate lilt. His delightful solo highlight “Donna non vidi mai” appears in Act 1.

The lovers give perhaps their most gripping and emotional singing in Act 2, with “Tu, tu, amore tu…” one of the great love duets from all of opera. One final musical mention is that the beautiful prelude to Act 3 received such sustained applause that Maestro Nicola Luisotti took an unscheduled bow.

In an era of multi-purpose, convertible sets and projections, which are obvious and probably necessary budget saving measures, it is nice to see a traditional staging. This production contains four distinct sets, which does necessitate two intermissions and a pause, but the extra time is worth the wait. Together with lavish costumery, this is grand opera.

Manon Lescaut holds some curious distinctions within the Puccini canon. Chronologically, the third of his nine full-length operas, the first two were failures. This was his only opera lauded at its conception by critics and audiences alike, and so successful was it that he immediately became an opera superstar and was widely anointed as the successor to the mantle of Verdi. Yet it ranks only in the second tier of the composer’s most worthy operas, shy of the four popular masterpieces La Boheme, Madama Butterfly, Tosca, and Turandot.

Its birthing was the most painful of his operas as well. Against the advice of his publisher, he insisted on pursuing this story, despite the fact that Massenet had great success with it several years earlier. But Puccini argued that this heroine deserves more than one lover. However, it would take no less than five librettists working off and on to complete the words, including the distinguished trio of Ruggero Leoncavallo, Giuseppe Giacosa, and Luigi Illica. But so jumbled were the contributions, that traditionally, no librettist has been listed in programs.