Will Eno Takes on Peer Gynt

GNIT a Delight at Theatre for a New Audience 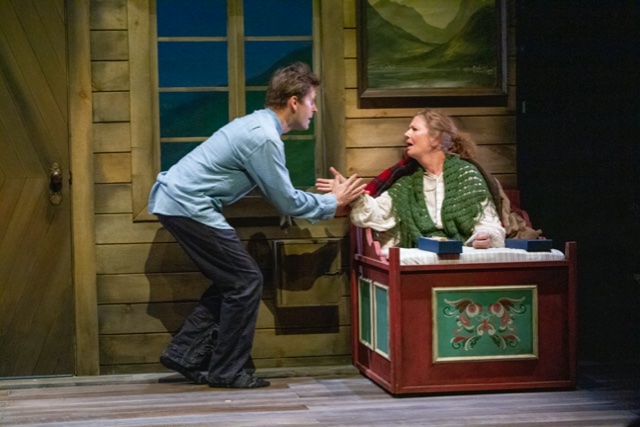 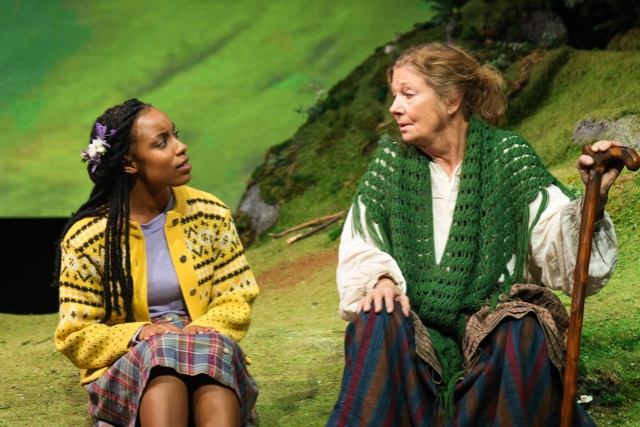 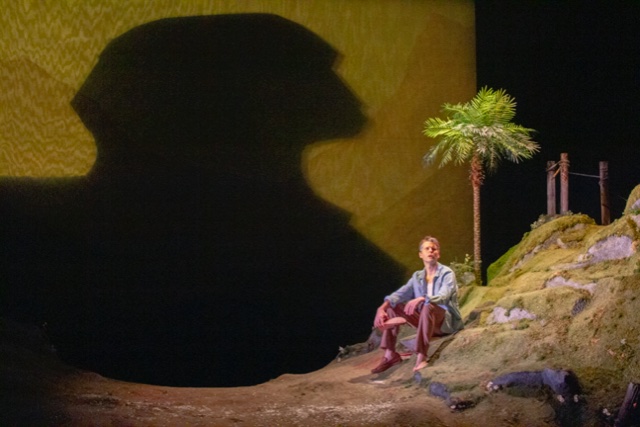 Peter in Egypt; Ibsen would later represent Norway at the opening of th Suez Canal 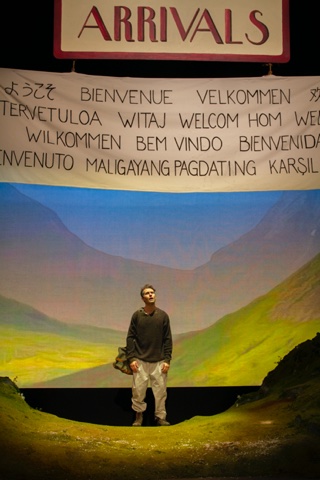 Peter on the road 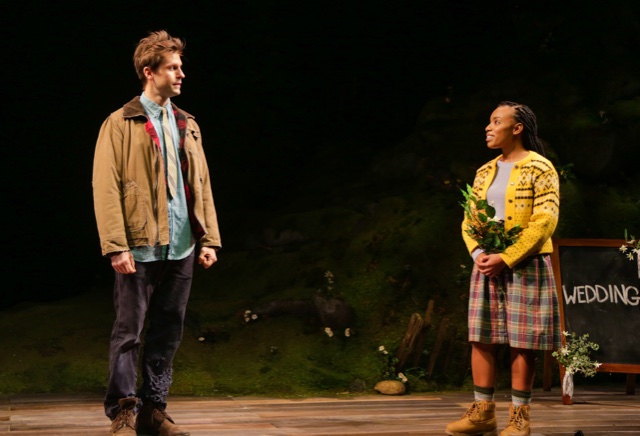 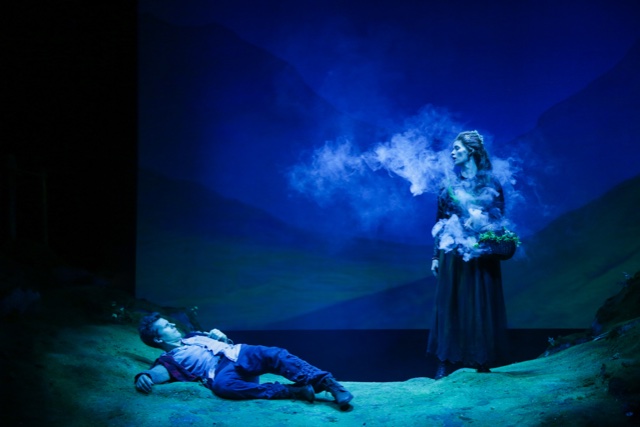 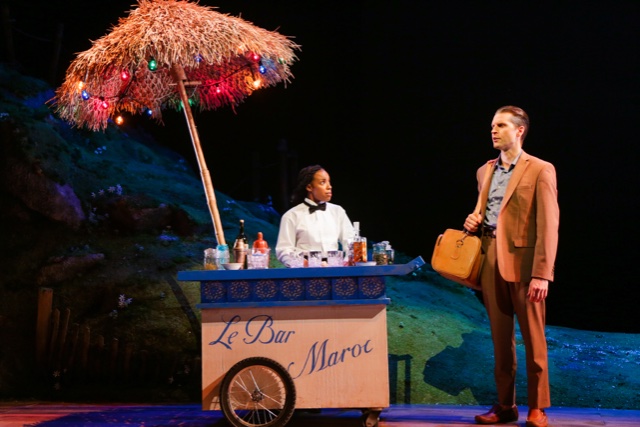 Peer Gynt was written by Hendrik Ibsen in 1867. The Norwegian born playwright was living in Rome, Ishia and Sorento, Italy. Ibsen created, using Norwegian folk tales, tangling them into dark corners of his own life.

Ibsen is in the pantheon of playwrights wuh Shakespeare and Moliere.  His work invites postludes and provocative interpretations.

Theatre for a New Audience mounts Will Eno's Gnit, a new take on Peer Gynt. Witty expansion of dialogue by the play’s myriad of characters surrounding Peer, now Peter, both charms and moves. The new version is titled Gnit, "a typo" Peter tells us.

The update is also informed by the influence Ibsen had on Samuel Beckett.  In the beautiful setting created by Kimie Nishikawa, there are moments when you expect to see Winnie from Happy Days up to her head in sand.

Eno has captured the brevity and punch of Beckett in the actors’ language, which was poetic in its original. Ibsen abandoned poetry for the language of the quotidian in his later works, focusing on forms that would give a deeper meaning to the domestic dramas as they unfolded.

Ibsen did not expect this dramatic poem of 38 scenes to be produced. Many others have found it unproduceable. There is a marvelous CBS radio version with Ralph Richardson and Laurence Olivier. You can hear the familiar music Ibsen induced his colleague Edvard Grieg to write for the dramatic poem's interstices.

In the TFANA production, directed with a masterful hand by Oliver Butler, music is sometimes folk and sometimes the noise of nature. (Sound designer Lee Kinny, Music by David Keeger).

What brings the play forward into the now and also amuses is Eno’s expansion of the dialogue of the all the characters around Peer, now called Peter. The consequences of Peter’s picaresque journey in search of himself are made clear without bitterness. Yet they leave the audience with a bitter after-taste by the time Peter completes his Grand Tour.

Deborah Hadwell, brilliant in many roles, quickly gets us into the mood as Peter's mother. “Never have children. Or, I don’t know, have children. You end up talking to yourself, either way."  Then she looks at Peter and says simply, “You’re a liar." Lies feature prominently in Ibsen, who often entwines them with feats of imagination.

As Peter weaves the tales of his recent travels, his mother interjects: “You told me that yesterday,” a seemingly devastating damper which doesn’t dampen her son.

Women are attracted to Peter, among them a bride-to-be sitting on the toilet trying to avoid marriage,  and the lovely Solvay who he will abandon for thirty years. Eno has expressed the most concern about Solvay’s fate. He creates a richly developing environmental concern which has led her to.a central place in the community around the home Peter hastily constructed for them. She gives away the vegetables she grows.

On the road, other women rebuff him, Peter asks one, “Do you know me?” She responds “Yes,” and quickly reverses herself, “Oh no I don’t.” Approaching another woman, she turns Peter away, “Thank you so much for not touching me."

What is Peter’s problem: “He thinks everything is him.  He is the emperor.”

Images from Ibsen One are often imported intact. Picking up an onion toward the end of the play, Peter peels the layers to find it is nothing at base, like him.

A nineteen-year-old James Joyce would write to Ibsen, “...your battles inspired me…fought and won behind your forehead. How your willful resolution to wrest the secret of life gave me heart,..you walked in the light of your inward heroism.”  It is harder to see in this play than in others penned by Ibsen. Yet the struggle of an artist to live in the real world of humans when his mind is always dashing like a reindeer into icy waters feels like the playwright.

Eno colors the journey with a rich reactions. These are articulated by a splendid cast including Jasmine Batchelor, Jordan Bellow, Christy Escobar and David Shih. Joe Curnutte as Peter is still the bogus poet, a  narcissist, a self-idolator, seducer, bombastic self-deceiver. But he eases his mother’s death with a playful tenderness.

Eno has rammed Peter and his world with life. The characters, played often by one actor in multiple roles, are vibrant. Their funny and apt dialogue not only extends reactions. It comments on the play itself.

Playfulness gone rancid is put in its place by new, amusing put-downs. Can we survive the Peters?  Self seems less interesting in the post Freudian world. Narcissim reigns in Me-tooism. It is not as cruel as Peter’s offer of help to a beggar and his abrupt withdrawal of the offer.

Yet this terrific evening of theater is full of good humor. A hoot at the Polonsky Shakespeare Center through November 21.