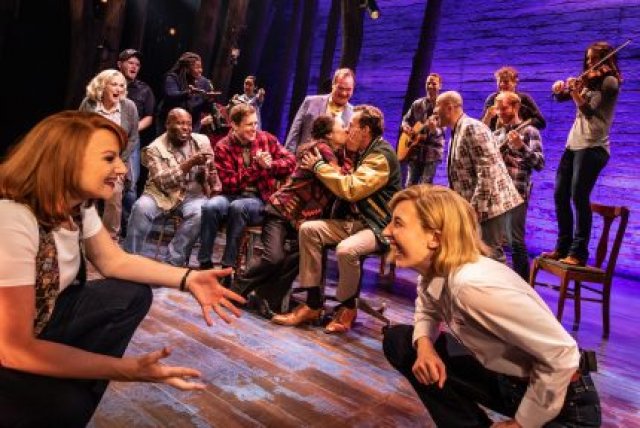 Photo by Matthew Murphy Come From Away can remind us of the joys that come with connecting with folks. Here, cast members appear in a scene from the North American Equity touring production.

Come from Away, the beloved, big-hearted Broadway musical about a small Canadian town that opened its hearts and homes to strangers, was always embraceable. After all, with honesty and sensitivity, the Tony-nominated musical covers such themes as the importance of connection, and humankind’s innate capacity for altruism. Of course, such themes will always prove universally relevant.

However, during a pandemic, Come from Away feels even more vital and huggable. That became evident recently during a performance in Ft. Lauderdale of the show’s vibrant and credible equity national touring production. It is grounded at Ft. Lauderdale’s Broward Center for the Performing Arts. Soon, it will land at West Palm Beach’s Kravis Center, and Sarasota’s Van Wezel Performing Arts Hall. Then, the show will depart the Sunshine State. The musical opened on Broadway in 2017, and is still playing on the “Great White Way.”

No doubt, we are living during a time in which many feel frightened, sad, lonely, overwhelmed, confused, uncertain, and helpless. With that in mind, it can be healing to know that we have felt such emotions before, proved resilient, and survived. In particular, I am referring to the terrorist attacks of Sept. 11, 2001 and the days following. That is when Come from Away takes place.

More specifically, the show’s setting is the Canadian town of Gander. Its population in 2001 was about 11,000. Gander rests in the northeastern part of the island of Newfoundland in the Canadian province of Newfoundland and Labrador. Naturally, nobody expected this remote town to become widely known following the terrorist attacks. Yet, that is what happened.

After the U.S. Government shut down American airspace following 9/11, many airplanes had to land in Canada. In fact, air traffic control diverted 28 planes carrying 6,579 passengers to the Gander airport. It was once one of the world’s largest. For a while, nobody could get off the airplanes. And when they finally were able to deplane, they became stuck in Gander for several days, with no means of traveling back home.

As the show’s Canadian creators, Irene Sankoff and David Hein, gleaned from interviews, people can respond in huge ways when fellow human beings are in need.  Gander residents managed to feed the nearly 7,000 stranded souls, pray with them, and sympathize with them. At least one resident invited a stranded traveler to his home to take a shower. Yet others proclaimed some of their guests honorary Newfoundlanders through a lively ceremony. Part of it required the “plane people,” as Gander folks called those stranded, to kiss a fish.

To Sankoff and Hein’s credit, they included that fact and others in Come from Away, an uplifting, humorous show that is never depressing. While much of the show is positive and upbeat, Sankoff and Hein have told a true story with honesty and balance. During the “plane people’s” time in Gander, cultures clashed. Impatience and annoyance led to heated arguments. People were intolerant, and even cruel. At times, the travelers felt lonely and lost despite the locals’ kindness.

The national touring production finds ways of visually symbolizing the loneliness, fear, and claustrophobia that the characters feel. For instance, a tall brick wall, part of Beowulf Boritt’s minimalist, yet versatile set, seemingly transforms into what resembles tall jail bars enclosing a cell. Add to that a darkness, part of Howell Binkley’s versatile lighting, and you get a sense of entrapment.

However, the set is mostly spacious. It features not just the tall brick wall, but seemingly real, barren trees. They add a sense of authenticity to the action. And their bareness might symbolize the lives lost on Sept. 11, 2001. The set rotates, with actors on it. This can suggest that with time passing, the characters change, thanks to their experiences in Gander.

The characters’ stories are touching and relatable. For instance, we meet two women. One is American, while the other is a Gander resident. Both have firefighters as family members. One of the American’s loved ones is a New York City firefighter. Her new Canadian friend sympathizes with her as the U.S. woman scrambles to learn news of her loved one’s fate amid the rubble of 9/11.

From all the material that Sankoff and Hein gathered, they faced a huge editing challenge. Remarkably, they managed to tell more than 16,000 stories playing out over the course of five days. Even more jaw-dropping, Sankoff and Hein related these true tales in a 100-minute, intermission-free musical using just 12 actors. Obviously, the authors merged tales to avoid duplication. And the 12 actors portray multiple roles.

The cast members prove to be chameleonic, and each creates a distinct, convincing character. In addition, the actors’ expressive and pleasant singing voices allow them to emote well while singing. A live, vibrant band accompanies them.

A combination of Celtic and other world instruments metaphorically suggests an intersection and embracing of people from around the world. These non-traditional instruments help create a flavor of the Newfoundland culture and ambiance, as well as a sense of a welcoming community.

While the songs comprising the show’s varied score are not especially memorable, the music uplifts and evokes multiple emotions. Altogether, the songs help take us on an emotional journey. It serves up joy, anger, fear, sadness, and other emotions.

The music’s driving, propulsive rhythms lend a sense of liveliness and urgency to the proceedings.  At least one of the songs is rousing, and might make you want to get up and dance.

Most of all, the lively music, and this vibrant production in general, will remind you of what many of us have missed during the pandemic — live and lively, in-person interaction with others.