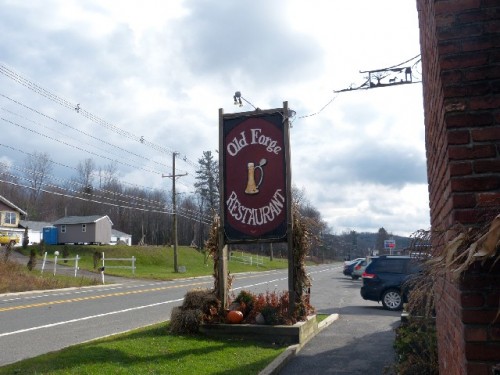 The Old Forge Restaurant in Lansboro is a Best in the Berkshires destination for beer and wings. 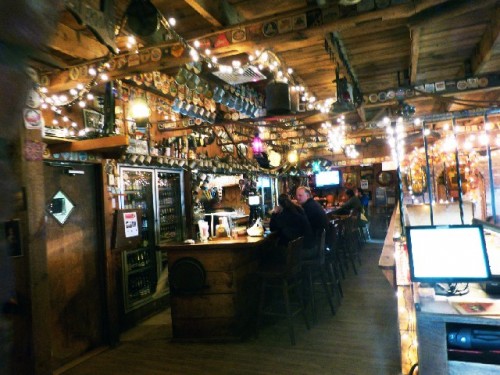 The bar is packed three deep on weekends. 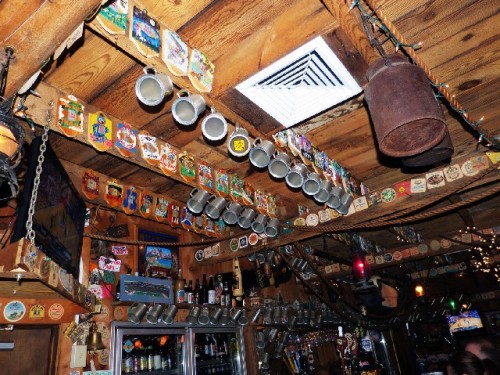 An ornate arrangements of mugs attached to the beams. 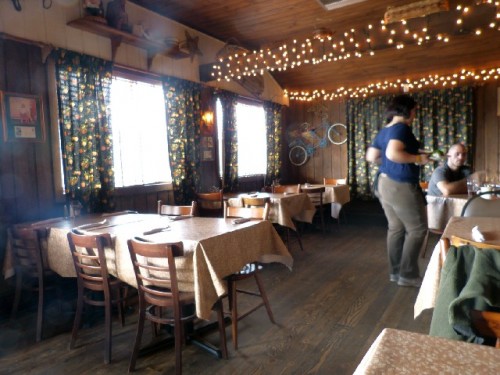 The less cozy back dining room. 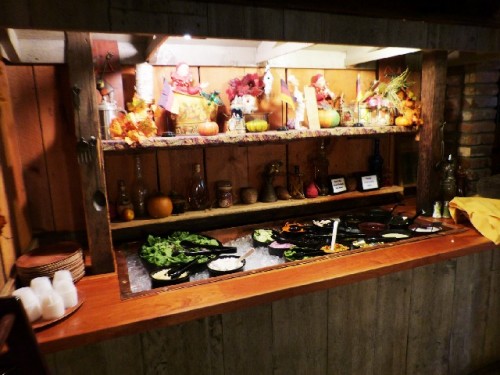 Nothing special about the modest salad bar. 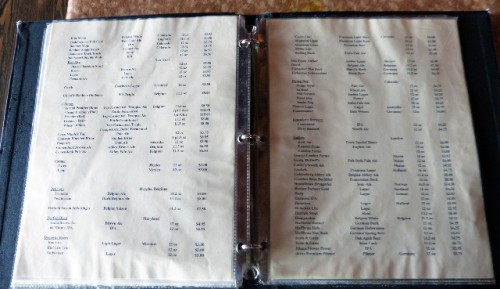 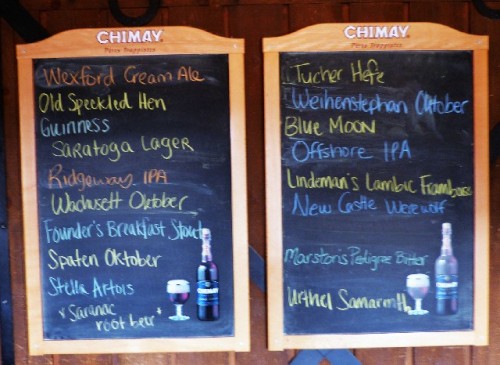 As kegs are changed the blackboard is constantly updated with an exotic range of brews. 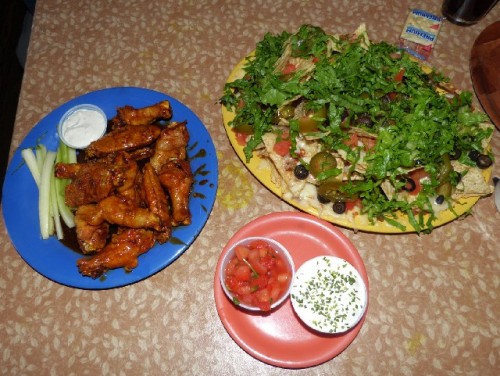 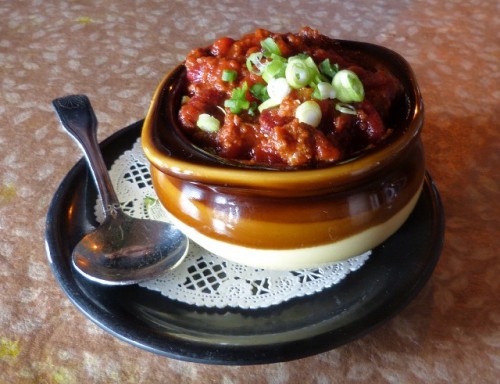 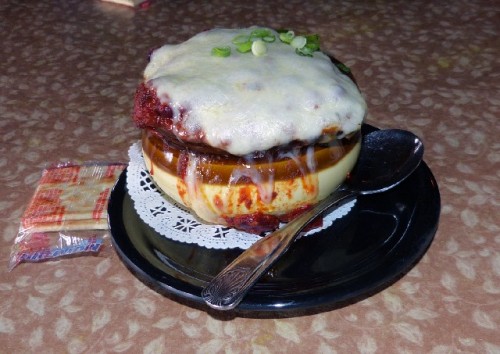 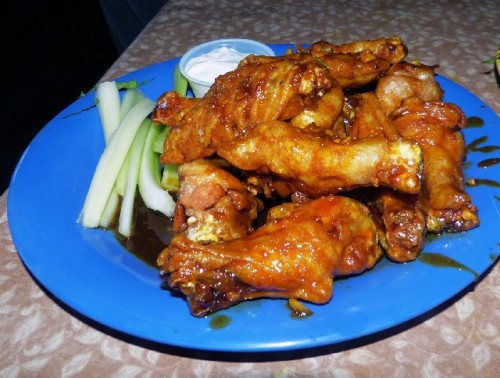 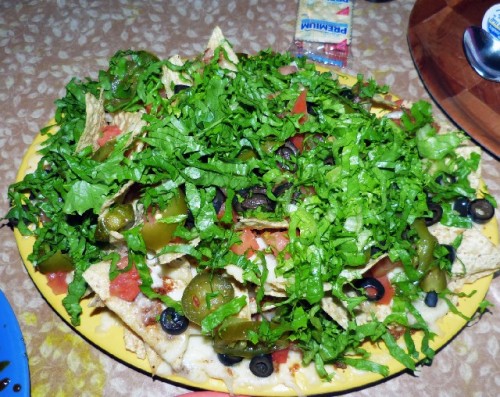 What was all that shredded lettuce doing on the disappointing nachos?

The Old Forge Restaurant in Lanesboro, on Route 7 a short distance from Pittsfield, is one of a number of pubs and casual dining destinations along the shore  and past the lake front.

The pub is legendary in the Berkshires for its winning combination of awesome wings, some 18 rotating designer beers on tap, and an incredible selection of more than 200 in bottles. There is also an extensive pub and comfort food menu from a selection of sandwiches at $7.95 through a “grilled to order, 14 oz, bone in NY sirloin with sautéed wild oyster mushrooms and garlic, for $23.95.”

With no reservations it’s busy on week nights with waits of a half hour to forty five minutes on a weekend. That means three deep at the bar with that incredible selection of brews to sample. Like where else in the Berkshires can you find classic Belgian beers on tap?

The Pit Bulls dropped by for lunch. It was busy but not full. We would have preferred the more cozy and comfy dining room parallel to the bar but ended up in the more generic and virtually empty back dining room. They are connected by a narrow space flanked by the modest salad bar (unlimited trips, $6.50 and $4.95 for a single pass). Six of the eleven entrees on the regular menu include the salad bar, vegetables, and a choice of French fries, rice or potato.

Splitting the wings and a bowl of chili each was enough for a satisfying lunch.

Because we were reviewing, and wanted to get the full impact, we went with the guy thing of Lanseboro Nachos for Two ($11.75). It was a big mistake and never again.

Only on Holidays and special occasions do we drink before 6 PM. So we didn’t get to try those incredibly tempting beers. I have an upcoming lunch date with an Irish writer friend to hoist a few. His car runs on Guinness while I will likely try a Chimay if its on tap that day. The last time I had it as a draft was in Belgium years ago.

Pancho We’re wings people. Every weekend we have wings. I’ve had wings all over the area. Some were deep fired. Some were broiled, or grilled. Some were baked. Whatever the system the Old Forge is the best. They have three styles: Old Forge Original (original, hot, super hot), Buff Orpington (sweet and spicy) and Dean’s (traditional buffalo style). The Buff Orpington means yellow chicken and has a curry element for an Asian take.

With its Asian flavor it’s my favorite because it’s a break from tradition. It works well with the wings.

(Buffalo wings were first prepared at the Anchor Bar by Teressa Bellissimo, who owned the bar along with her husband Frank. Upon the unannounced, late-night arrival of their son, Dominic, with several of his friends from college, Teressa needed a fast and easy snack to present to her hungry guests. It was then that she came up with the idea of deep frying chicken wings (normally thrown away or reserved for stock) and tossing them in cayenne hot sauce.)

It’s fast food for a bar. Waste food either dumped or used for stock. The original is vinegar, cayenne pepper sauce, and whatever you want to add for spice. You can sprinkle, shake, whatever. If you grill you have to have a sauce that can take the flame.

For me wings should have a kick. So with the traditional, mild, that doesn’t work for me.

The first time I tasted the Buff Orpington well that was something. Of course curry, a mixtures of spices, comes in all degrees of flavor and heat. Curries can range from hot to sweet.

Cisco Let’s talk about the chili. I had mine with cheese and you had yours plain.

Pancho That’s the kind I would make. What I noted was a slight barbecue flavor. Which makes it interesting. There was a nice chunk of meat in my portion. I’m not into vegetable chili. You can’t have nice chili without meat. The beef was cooked before which is important. Then the simmering with the beans.

Cisco Overall, I liked the chili which was better than you usually find here in New England. But, for me, while there was a nice meaty, tomato base, it lacked intensity of spice. I like more heat. This was cooked for the mid level diner and would be passed over by a Tex Mex specialist. At best, not bad for New England, but I like more chili powder and cumin. I also like more onion and bell pepper even habaneros.

The nachos (Lanesboro Nachos for Two)?

Pancho For me, a total flop. No taste.

Cisco For me generic. I’ve had better nachos which should be a no brainer for pub food. What the heck was all that chopped lettuce doing on top? It came out looking like a salad. Even the jalapenos had no zing. I never found the alleged spicy beef. The melted jack cheese lacked flavor and just formed a slab over the dry nachos below. The sour cream and salsa (more like diced tomatoes with no cilantro or peppers) did nothing when added.

Pancho No taste, the wrong cheese. This was almost like Swiss cheese. The botanicals had no character. I went for some of the leftover Buff Orpington sauce from the wings and the blue cheese sauce to get some character in the nachos. It needed something.

Cisco I’ve never seen lettuce on top of nachos. What was that about?

Pancho Weird man. I can see the tomatoes, olives, jalapenos but no way for lettuce.

Cisco So wings A. Chili B. Nachos C.

Pancho For you Nachos C but for me Nachos F.

Cisco Have you had other dishes here?

Cisco Overall how would you rate Old Forge.

Pancho For what it is one of the best. But at night you have to put up with a long wait for a table and crowding. Under the right circumstances with friends that can be a lot of fun. But this is not the destination for an intimate, romantic dinner.