The Curious Incident of the Dog in the Nighttime 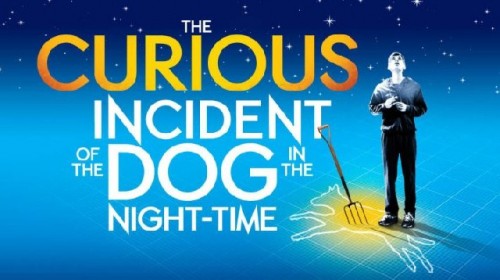 Currently enjoying a sold out run in London’s West End. 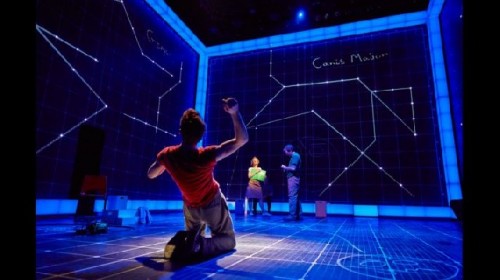 The inventive use of graphics in a bare cube. 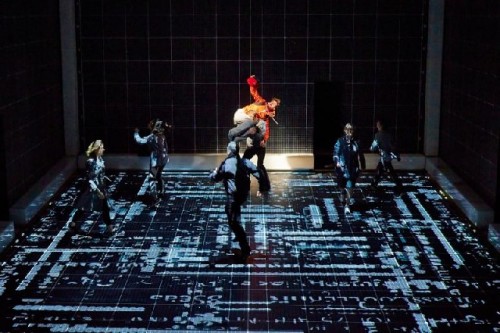 Even the floor conveys the graphic design. 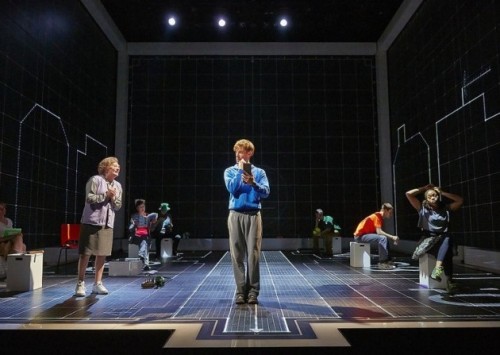 Surrounded by a community of onlookers in his small suburban village. 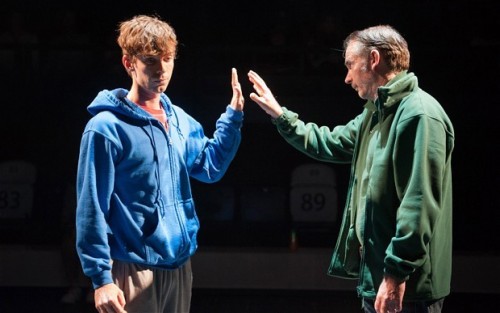 Cautiously touching hands with his father. 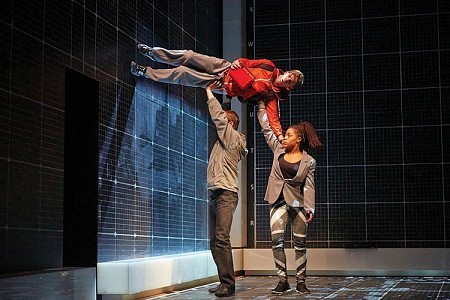 (The ceiling of the 100-year-old London theatre recently collapsed causing injury to some 70 patrons in the balcony. It is said to have been caused by usual rainfall which might have resulted in damage to the roof. All of London's theatres have since been inspected. The Apollo Theatre is being repaired and the show is scheldued to reopen on January 4.)

After a transfer last March to London’s West End, the incredibly original and galvanic production of The Curious Incident of the Dog in the Nighttime, based on the book by Mark Haddon adapted by Simon Stephens, won seven Olivier Awards matching the number for the musical Matilda.

One of those awards went to Luke Treadway who was described as inhabiting the complex character Christopher who was both challenged with symptoms of Asperger’s as well as remarkably insightful, galvanic and a savant of math, science and technology.

While Treadway may have left big shoes to fill the performance by Noble was nothing short of astonishing. We were on the edge of our seats through every minute of a truly mind boggling evening of theatre.

The staging presented an open cube with three walls and the floor as ever morphing surfaces for state of the art, digital graphic imagery. The technology of this production sets a new benchmark for theatrical design.

There was a minimalist use of props such as boxes or benches surrounding the stage. Members of the cast were used as silent observers to convey community. There was also a use of intricate choreography to create the confusion with which he navigated crowds. It was mind boggling when he just climbed up a wall on invisible stairs and then came tumbling down an ersatz escalator.

This technology and use of exotic special effects was acknowledged in an inventive manner when Christopher bounded back on stage after the curtain calls. He was compelled to explain how he had solved the Pythagorean Theorem during the honors math exam that culminates the second act. While solving the problem he refers to the special teams that ran all that technology.

There is a kind of layering in the telling of the narrative. Rather early in the first act, Siobhan, his special education teacher, reads from the book by Haddon allegedly written by Christopher. As a play within a play, at some point, Christopher decides to make a play of his book. This has a twist when he tells a character/ actor that he is too old to play a copper. Then, late in the second act, when he is frustrated by solving the math problem in the exam, he wants to explain the solution. Sibohan reminds him that it’s just a play and there isn’t enough time for this. She suggests that he might explain it after the show.

This staggering between illusion and reality is clever in the manner of Pirandello’s Six Characters in Search of an Author or Shakespeare’s play within a play in Hamlet.

The time and reality shifts, however, did not sit well with Ben Brantley in a New York Times review.

“…Though the device of Siobhan as an interpreter is retired for much of the second act, she shows up again to step outside the show and suggest that this play is a work that Christopher has made by his very own self.

“Yuck. Perhaps the point here is that even the best-intentioned souls can be patronizing about the struggles of the mentally challenged. Or perhaps the show’s creators believed this tone of voice is necessary to appeal to the children in the audience. In any case it is likely to irritate anybody older than 8.”

Is that really “Yuck” which he wrote?

For, at best, a small hiccup in an otherwise brilliant and magnificent production? Arguably the most unique on either side of the pond in this century?

What do critics know?

Does it make one any less perceptive totally to be absorbed by a visual feast of production values as well as heartfelt, gut-wrenching performances.

Ok. It does get a bit sentimental as plucky Christopher claws his way over all those incredible obstacles. Like the impossibility of getting from point A to point B without circling madly about.

Oh yeah. The dog at nighttime.

We see just a flash of the mutt spiked with a pitchfork setting the drama in action.

Being close at hand to the crime Christopher is an immediate suspect.

The investigating copper makes the mistake of touching Christopher.

That’s a serious no no. He absolutely cannot stand to be touched. It totally freaks him out.

Having been accused, and then quickly absolved, Christopher is determined to solve the crime. He has this thing about Sherlock Holmes.

His quest for truth is a folly rather like that of Oedipus investigating who killed King Laius.

By the end of the first act his father, who patiently cares for him, has lied about his departed mother who does not. His short explanation is that she died. Another no no for Christopher is the tyranny of truth.

While this is unfolding Christopher is intent on assembling a model trains set with stations and scenery. At the end of which it all works. This sets in motion the second act when he will travel to London to live with her.

Watching him stagger on with danger ever lurking is totally heart wrenching. Like when his pet rat escapes and Christopher hops down by the tracks to find it. We are on the edge of our seats as strangers pull him out just missing an oncoming train.

Of course, the big question is when will this five star production transfer to New York? It seems inevitable but there is no news on that so far. Until that happens, when in London, be sure to spring for pricey tickets for this sold out production.

It’s totally worth putting on the extra pounds.