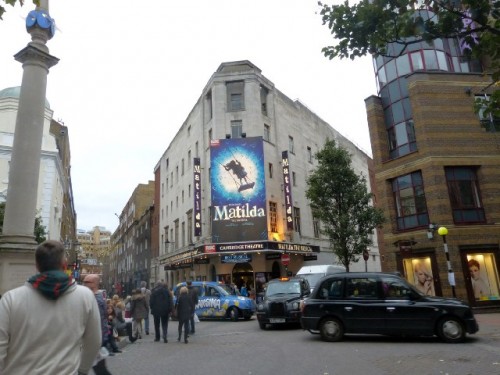 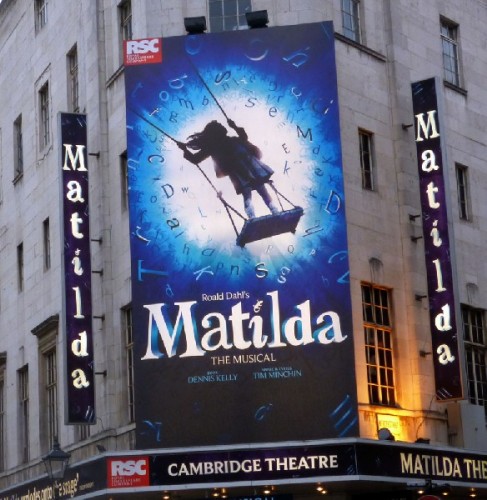 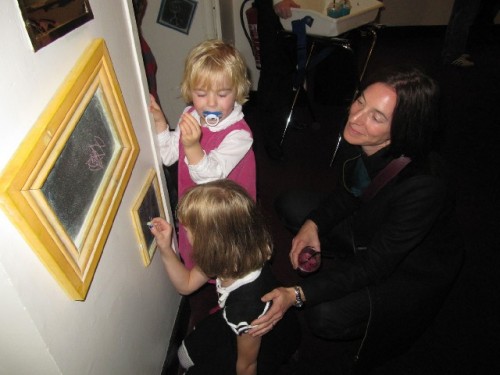 Kids playing in the lobby. 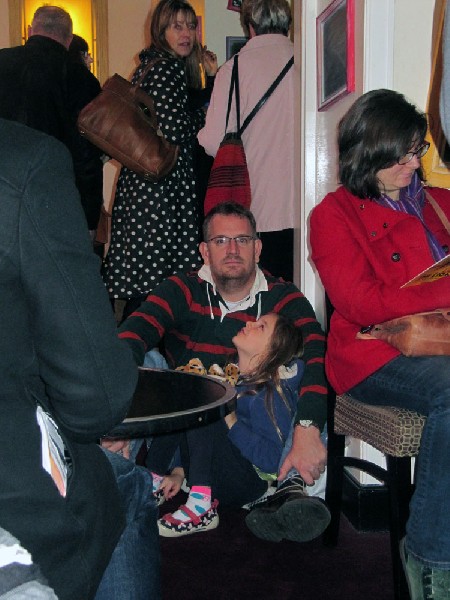 A family outing for the matinee. 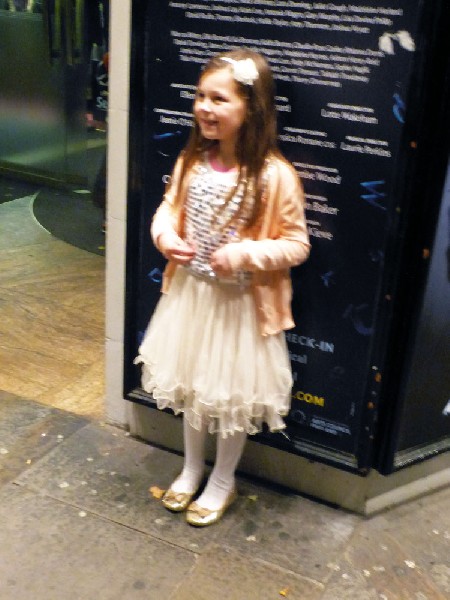 All dressed up for theatre. 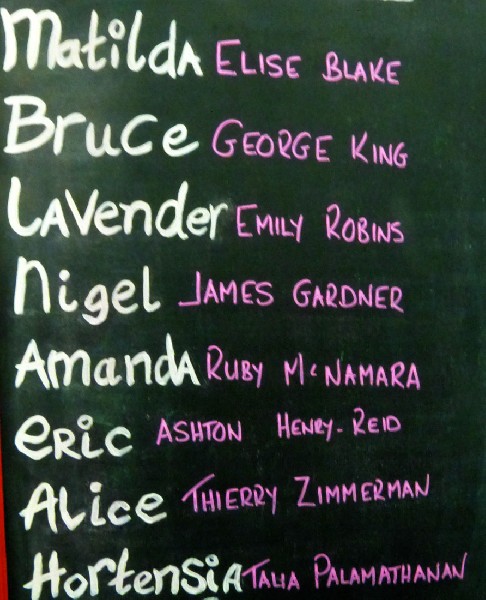 A slate with the often rotated juvenile cast for the matinee performance. 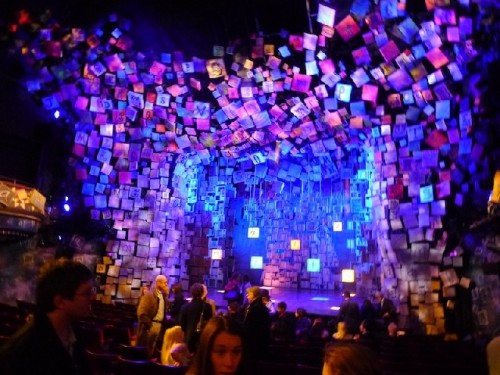 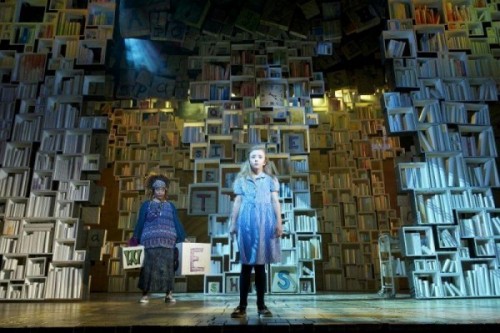 Simulating the library where Matilda explores the world of books. 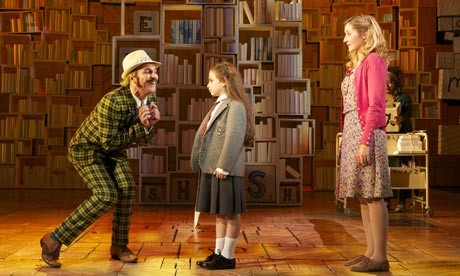 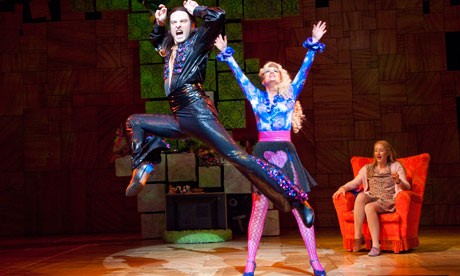 Mom and her dancing partner. 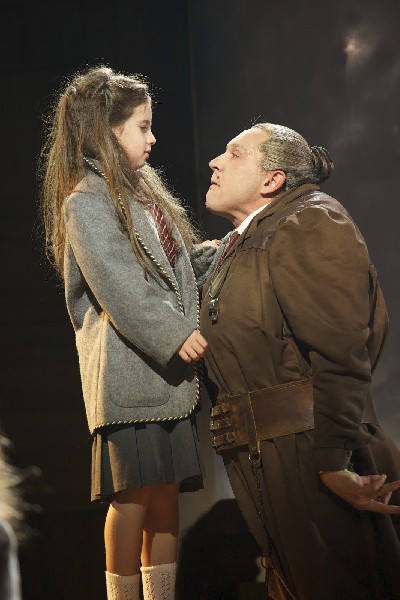 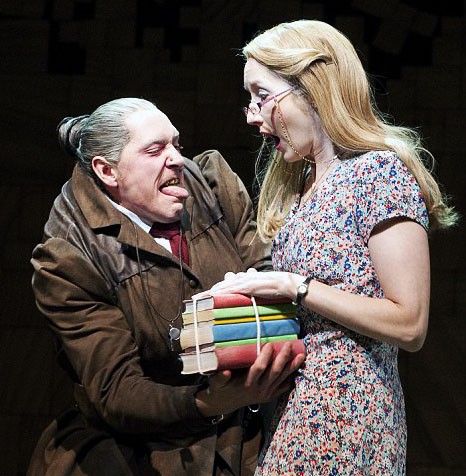 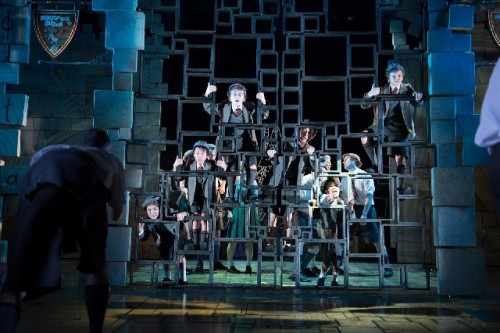 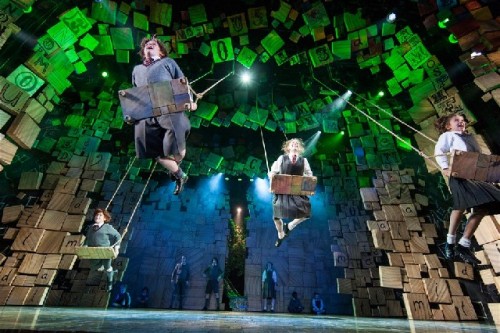 Kids just want to have fun.

It was a school holiday week in the U.K. when we attended a kid filled Saturday matinee of the hit Matilda.

The New York Times gushed “…the most satisfying and subversive musical ever to come out of Britain.”

Looking about at the many families with starry eyed toddlers, truth is that we were all delighted children; it’s just that some of us were older than others.

It would take a hardened curmudgeon not to be totally charmed and transformed by this Never Never Land of utterly delightful fantasy.

While normally I’m not a fan of juveniles on stage, these children, were, well, just awesome.

The kids were tightly disciplined executing incredibly intricate choreography while belting out wonderful songs by the truly gifted Tim Michin.

The world of fantasy commenced from the moment we entered the theatre. In the lobby and lounge areas were blackboards with chalk encouraging kids to play.

That motif was continued in the set design by Rob Howell which entailed many modular panels conveying zillions of slateboards as well as letter blocks which were used to spell out words and enunciate themes.

Classroom desks popped up out of the floor as the pupils learned their lessons. They just as quickly disappeared. Swings dropped down and for finales the cast wove about on scooters.

As is the norm in such fairy tales there were black and white, cartoonish villains as well as the wonderfully gifted, terribly intimidated, plucky children.

The parents of the book worm Matilda (performed by Elise Blake), with an off the charts IQ, are smarmy but ever so much fun total low lifes. Dad is a cad and crook of a used car salesman. He is decked out like a con man in an iconically awful, loud, checkered suit. Mrs. Wormwood, is tarted up to the hilt and appears to be having a fling with an ersatz Rudolph Valentino ballroom dancing partner. Whenever he appears hilariously striking a John Travolta disco pose.

Mom’s motto is “Looks not books.”

Matilda’s dad so wanted a son that he insists on calling her “Boy.” He dotes on her doltish brother.

Thick Cockney accents, in Mom's case a shrill screed, were difficult for us Yanks to understand. On every level the Wormwoods were a sight and fright. It made us cringe every time she bellowed out a screeching line or he tried to sell the Brooklyn Bridge.

Unfortunately, to Russian hoods who did not take kindly to his attempt to scam them.

Matilda, who doesn’t owe the old man any favors, saves his bloody ass by arguing with the mobsters in Russian. The hoods are suitably impressed and wonder how she came to speak flawless Russian.

With a shrug Matilda just comments that she has been reading Dostoyevsky in the original, of course, as so much is lost in translation.

Yeah, she’s that kind of kid.

While her parents are so illiterate and anti-intellectual that they would regard a Nazi book burning as a festive barbecue and weenie roast.

With scary glee they sing how everything they know comes from watching telly.

That could be a Tea Party anthem during the next elections.

The Brown Shirts still lurk among us. Freaked out by the threat of kids that read.

Not to worry Twitter and Social Media are doing their best to dumb down literacy.

The truly scary character in this house of horrors is the headmistress Miss Trunchbull. She looks and acts just like the sound of her hideous name. The huge shouldered monster, played in drag, upholds the school motto “Bambinatum est maggitum” (“Children are maggots”).

What works so well in this riotous and original musical is that it scares the willies out of young and old. For youngsters it evokes the monster under the bed and fear of what lurks in the dark. To older children, ersatz adults, it hauls us kicking and screaming back to all the terrors of early education from the bullies who stole our lunch money to demonic ghouls and vampires moonlighting as teachers.

Decades later we wake up in cold sweats from classroom nightmares.

Tempered by those saints and angels who nurtured and cared for us. Like Sister Mary Arthur who took such a shine to me. During nap time she slipped me sweets. Here it is the librarian who advises Matilda on books and the teacher Miss Honey who risks the wrath of Miss Trunchbull to tutor and encourage her gifted and tormented student.

While there are many ways to respond to Matilda, from the innocent joy of a child to the analytical approach of an alleged adult, there is no way not to be totally ensnared in its wonder and magic. We are wafted aloft from Kansas to Oz in a tornado of swirling theatrical pleasure.

Today Broadway.com reported that “Matilda could be putting her books down and heading to the movies! Tony winner Dennis Kelly, who wrote the book for the musical, has been tapped to adapt the show for the big screen, according to the U.K.'s Daily Mail. However, Matilda fans will have to wait until 2019, at the earliest, to see the hit tuner on the silver screen, due to contract stipulations that prohibit any film version appearing within six years of the musical's opening on Broadway.

”Director Matthew Warchus also revealed that composer Tim Minchin might contribute some new songs for the movie. "It'll be different from what we did on stage," Warchus told the Mail, "Matilda's imagination lends itself very much to film. We can open up her amazing acrobat stories. And there will be the conundrum of trying to capture the naughtiness and anarchy of the stage version."