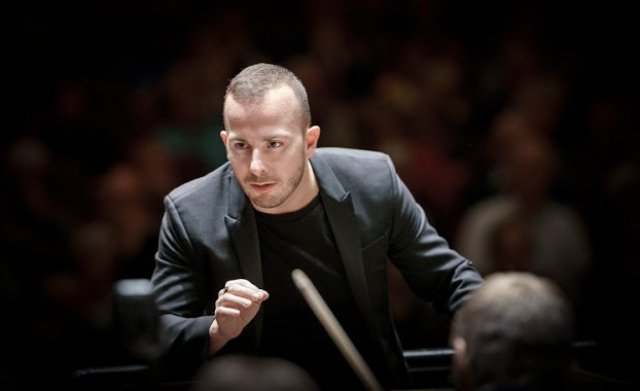 Before he took the job as the music director of the Metropolitan Opera, the conductor Yannick Nézet-Séguin became leader of the Philadelphia Orchestra. Happily for both ensembles he appears willing and able to balance duties in both cities. On Tuesday night, the maestro and his band came to Carnegie Hall for the first of their scheduled subscription appearances this season. They brought with them an impressive centuries-spanning program that played to the many strengths of this remarkable ensemble.

The last time a major orchestra played the Prelude to Act I of Wagner's Lohengrin on the Perelman Stage, it was the MET Orchestra, and the comeback concert of one James Levine. Mr. Nézet-Séguin made the canny choice of offering his own interpretation of that piece here, helped by shimmering, divided violins and a groundswell of woodwinds and horns. The most extraordinary moment: when Wagner drops the strings entirely, letting the four horns state the Grail theme in all of its splendor before receding into just the strings. It then dwindled to a silence that spoke volumes.

Next came the New York premiere of Anthology of Fantastic Zoology by the award-winning American composer Mason Bates. This is a huge, sprawling series of eleven movements inspired by the writings of Jorge Luis Borges. Like a modern version of Saint-Säens' Carnival of the Animals, this is a series of eleven interconnected portraits of animals and creatures from myths and legends. Bates, this year's Musical America Composer of the Year, employs massed orchestral forces with a delicate touch, only occasionally resorting to tone cluster and sonic overkill. The work also features a unique placement of the timpani: prominent at stage right and augmented by smaller drums.

"Sprite" bubbled and fizzed through the orchestra seeming to leap from instrument to instrument in an unpredictable fashion. "A Bao A Qu" slithered up a row of notes before curling around itself and descending the same ladder. "Nymphs" featured leapfrogging clarinets. "The Gryphon" was a chase between strings and brass, as the roars of the latter hunted its musical prey. "Sirens" was the emotional core of the piece, featuring members of the violin section playing solo parts offstage as if to draw the thematic material to a certain and watery doom.

Bates reserved the full fury of the orchestra for "The Zaratan", the portrait of an animate island come to full and monstrous life. Fist-like blows of jungle vegetation slammed into the listener, triggered with precise power by Nézet-Séguin. In the final section, "Madrugada", all the animas came out to play as the themes from the first movements returned. The effect of the whole was overwhelming and impressive, another strong work from the pen of this most entertaining composer.

Next, the orchestra was joined by Joyce DiDonato for Poème de l'amour et de la mer by the French Wagner disciple Ernest Chausson. Chausson is a unique voice, who would have become a major composer had he not died (in, of all things, a bicycle accident) at the age of just 44. This piece is a song cycle, setting several orchestral songs with common themes of love, death and the sea. Although DiDonato is a well-known artist to New Yorkers, her recent work has a new and tragic weight. She used that and her plush, powerful mezzo to good effect in these songs, which explore some of the chromatic territory of Wagner's Tristan but without the major key resolution and redemption at the end.

The finale of this heady evening was a tour through the Fountains of Rome by Ottorino Respighi. Nézet-Séguin and his troops know these pieces cold, but opted for a delicate, impressionist approach rather than the bombast one associates with this composer. From the subtle Dawn music to the majestic statements of the themes of the Triton and Trevi fountains, the players proved that this music can be more than just a soulless travelogue for orchestra. Indeed, some of the finest playing of the evening came in the slow final movement, as a bell-player gently tapped out the tolling of the Roman churches and the music drew to a subtle and quiet conclusion.  (Reprinted by permission from Superconductor) .