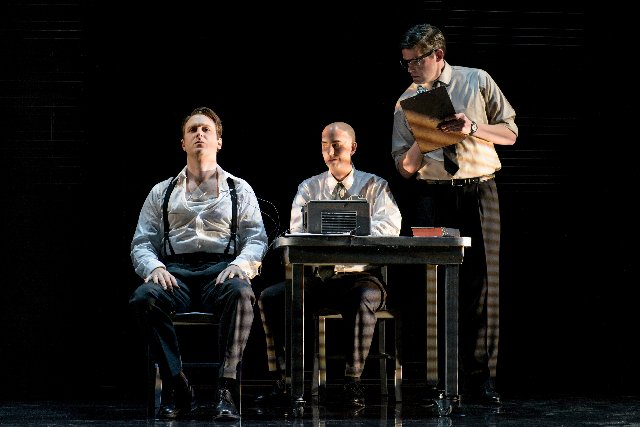 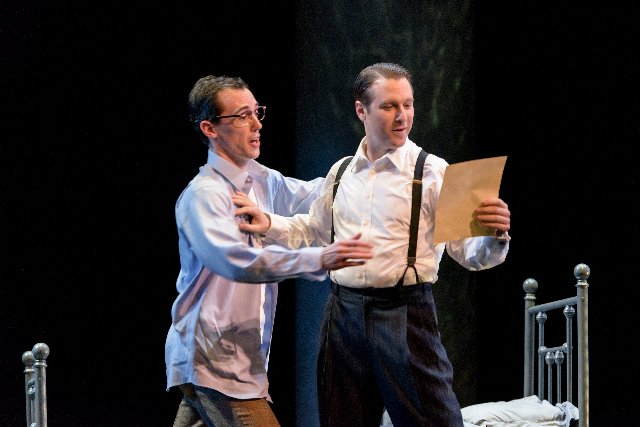 Boston Lyric Opera has once again successfully adapted and tackled politically and socially topical subjects in “Fellow Travelers”, an opera by Gregory Spears with Libretto by Greg Pierce. In a tale of covert romances, politics and power “Fellow Travelers”, based on the best-selling novel by Thomas Mallon, superbly balances a contemporary storyline with a gorgeous and accessible musical score under the fluid hand of conductor Emily Senturia. As BLO’s general and artistic director Esther Nelson pointed out in her introduction before the performance, “It is the emotion of the music that touches you.”

Against the backdrop of the 1950’s paranoia in Washington D.C., two men are swept into a passionate love affair, just as Senator McCarthy ratchets up his hunt for “sexual subversives” in government. Both Jesse Blumberg (baritone)as Hawkins Fuller and Jesse Darden(tenor) as  Timothy Laughlin share the lead as two men falling into an abrupt love affair while also working directly in the line of political fire at the State Department (Hawkins) and recently promoted as speechwriter (Timothy Laughlin) for a prominent senator. As the fish-bowl environment of select Washington D.C. parties and employee associations expose more than just a friendship, both characters are revealed as “sexual subversives” under a McCarthyism communist “Red-Scare” mentality and scrutiny of the 1950’s.

Jesse Blumberg showcases Hawkins Fuller, a flamboyant executive State Department employee with ambition, while Jesse Darden adds intimacy as Timothy Laughlin, a gentle and naïve intern speechwriter seeing the “big city” realties for the first time and needing to “learn the game” of Washington D.C. politicking. Both performers deliver their character’s distinctions as extrovert and introvert, showing a nuance and shaping of personalities on-stage that is sustaining and vital both in love scenes and confrontations with one another. The emotion, aside from a luscious score by Gregory Spears, is delivered vocally by Blumberg and Darden in equally shared moments and solo performances, establishing the seesaw of their hidden and then exposed forbidden lover’s relationship.

An additional standout performance in vocal range and commanding stage presence is soprano Chelsea Basler as Mary, a mutual office friend and particularly, a confident to the victimized more innocent character Timothy Laughlin. During several arias, the higher range of her voice chilled the audience at poignant moments and also richly accented the duets between the two male leads.

As the two lover’s professional careers implode and they try to take stock in their own culpability, Darden’s understated Timothy Laughlin exclaims “I don’t know who I am anymore.”

Greg Pierce’s libretto adaptation of Mallon’s “Fellow Travelers” set during the 1950’s anti-communist paranoia, and specifically highlighting the anti-gay government hiring and firing laws, can also apply to the collateral damage in today’s political landscape. Aside from the contrasting stellar performances by both male leads, and the large ranging depth of the musical score, Boston Lyric Opera succeeds in invoking a timely message about centralized political power and the victims left behind.