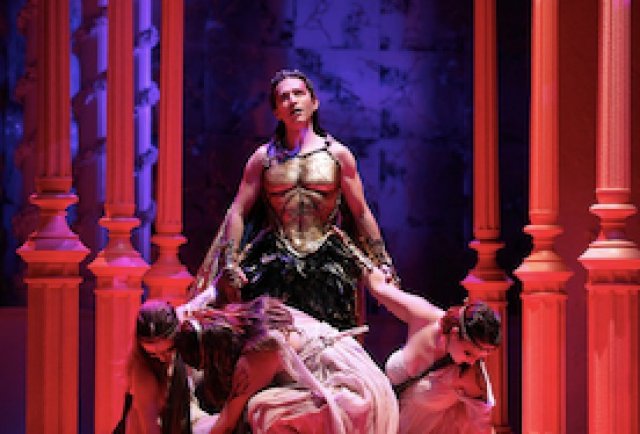 One of the major operatic events of the new decade, Cries dwells on the dangers that result from the repression of our darkest desires, told through a plot that combines elements of Bram Stoker’s Dracula and Euripides’s The Bacchae.

As part of BMOP’s extended 25th anniversary celebration season, the full BMOP orchestra will perform alongside one of today’s biggest opera stars, Anthony Roth Costanzo (Dionysus), and several rising vocalists, all at the helm of celebrated conductor Gil Rose. A world premiere recording will follow on Pentatone.

The Lord of Cries is a mélange of two classic literary works written two millennia apart: the Greek tragedy The Bacchae by Euripides, and the Gothic novel Dracula by Bram Stoker. Set in Victorian London at the fearsome time of Jack the Ripper, the opera begins with its title character – Dionysus, the god of fury – returning to earth. He materializes in Victorian England as none other than the irresistible antihero Dracula, and offers a mortal three chances to “ask for what you want,” or risk the consequences. The title role was written for superstar countertenor Anthony Roth Costanzo, who premiered the role in 2021 at Sante Fe Opera.

“I felt that Dracula needed to have an androgynous, unearthly sound, and of course to me that was the countertenor,” explains John Corigliano. Costanzo’s clarion countertenor combined with his electric stage presence make him a perfect choice. “The character of Dracula is a very complex one. In many ways, he is vulnerable and human, and in other ways he is incredibly violent and full of rage. What you can’t take for granted is that fearsome quality,” says Costanzo.

In The Lord of Cries, Corigliano created powerfully contrasting sound worlds to juxtapose the tidy world of the Victorians against the savage grandeur of the immortals, forging musical drama from the tension and gravitational pull between the two worlds.  Says the composer, “One important point of The Lord of Cries is that this conflict between who we want to be and who we actually are goes on and on; it tormented the ancient Greeks, and it torments us. So that torment is the score’s real subject.” According to Seen and Heard International, the extravagant music makes for a magnificent thrill ride. “Corigliano makes creative use of traditional opera elements – arias, duets, a mad scene, a consternation scene worthy of Rossini, plenty of orchestral color and smart use of musical gestures that develop into full-sized themes.”

The libretto for The Lord of Cries was developed over the course of a decade by Corigliano’s spouse, Mark Adamo, marking the first operatic and large-scale collaboration between the two longtime partners. The core message of Adamo’s libretto is that repression breeds madness and violence. “Adamo’s double-layered conceit is a good match for Corigliano’s aesthetic, which thrives on the collision of disparate spheres.” (The New Yorker)

84-year-old Corigliano is one of America’s most admired and honored classical composers. His scores have won him the Pulitzer Prize, the Grawemeyer Award, five Grammy Awards, and an Oscar. A wide range of his music can be found on BMOP/sound’s latest album release: John Corigliano: To Music (released July 2022).