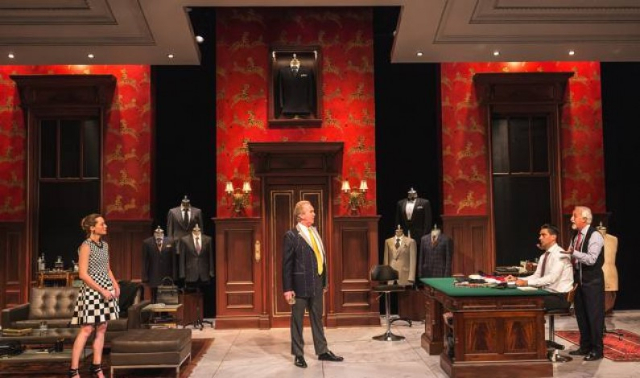 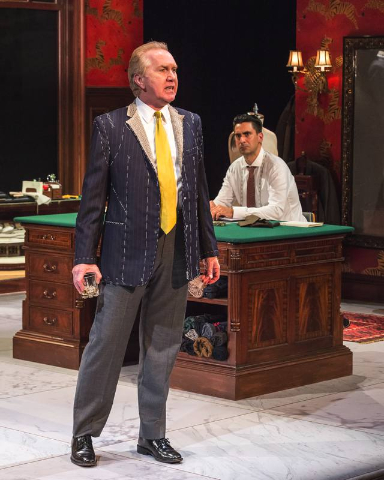 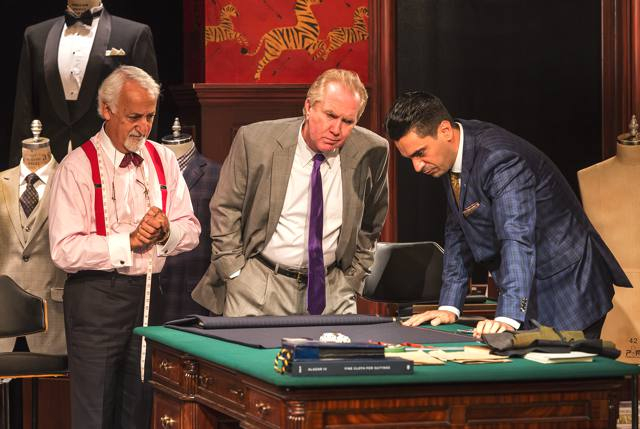 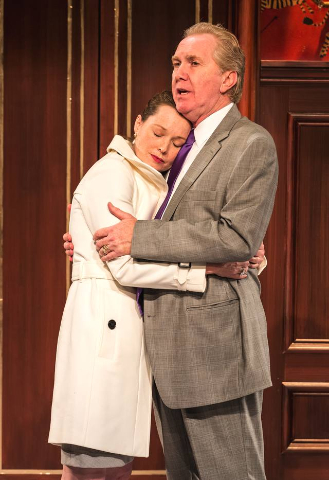 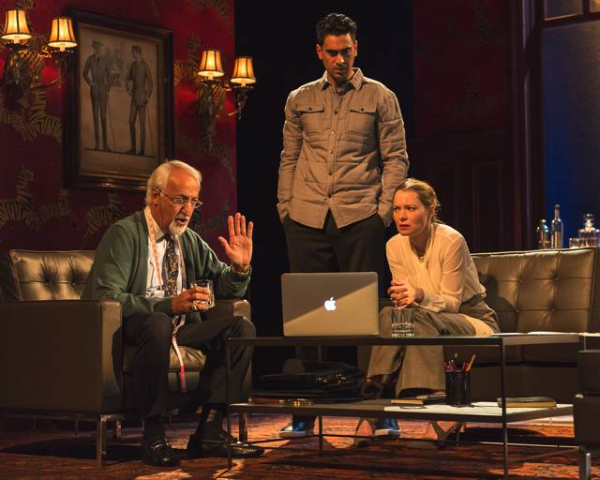 Some plays and movies get a little too “on the nosy”, and fall short of their intended target and audience.  Not so with the current World Premiere satiric political poke-in-the-eye from the pen of Jon Robin Baitz and his newest play “Vicuna”, now gracing the stage at the Center Theatre Group’s Kirk Douglas Theatre in Culver City.

There’s very little doubt that Baitz has been influenced by the antics and the three-ring-circus atmosphere of the 2016 Presidential Election campaign, led by ringleader Donald Trump. But then who hasn’t?  As a result, Trump is the hands-down choice of the media, the pundits and campaign surrogates to be parodied. He’s his own worst enemy and he doesn’t even recognize it.  But he’s great fodder and source material for playwrights and screenwriters to hoist him on his own petard.

“Vicuna”, unfolds in the stunning and luxurious, atelier of Anselm de Paris’s Manhattan location designed by Kevin Depinet, one of the outstanding scenic designers working today.  When the audience enters the theatre the set screams luxury and high prices. His creative set design for the 2015 Old Globe production of “Sense and Sensibility” is still fresh in my memory.

Baitz’s wickedly hilarious satire is deftly directed by Robert Egan, formerly the Producing Artistic Director of the Mark Taper Forum. Egan is fortunate to have casting director Meg Fister on his creative team for this production. She has assembled a stellar cast of solid actors who know how to perform in a comedy/satire production when they find themselves in one.

The story revolves around Presidential Candidate Kurt Seaman, an egocentric, multi-millionaire real estate tycoon and businessman played by Harry Groener, who wants a suit from the hands of master tailor Anselm Kassar for the final presidential debate in two weeks. And he’s willing to pay extra to have it finished in time.  Groener delivers Baitz’s outlandish lines with impeccable timing and silky smugness.  In short, he’s fabulous in a part he was born to play.

Brian George as Anselm Kassar the proprietor, is a man who knows how to make extremely expensive suits – Kassar charges Seamam $110,000  for a vicuna material creation-while his clients enjoy the art of the deal in the haggling over the cost, without either going beyond the point of losing the sale.

It’s a verbal tug of war between Kassar, his young progressive-thinking intern Amir passionately played by Raimiz Monset, who believes Seaman’s millions should be spent elsewhere where it could do some good, and not be wasted on dressing a megalomaniac.  The exchanges between Seaman, Kassar, and Amir, plus Srilanka (yes, that’s her character’s name), Seaman’s daughter played by Samantha Sloyan are right out of the recent Trump campaign playbook. It’s impossible to miss the obvious parallels.

There is another character called Kitty Finch-Gibbon wonderfully played by glamorous veteran actor Linda Gehringer.  Kitty is the ‘agent’ representing a mysterious cabal who are intent on getting Seaman to withdraw as a candidate by dangling a two billion dollar carrot as the inducement.  Oh, how candidate Seaman loves to be a player in the art of the deal.

“Vicuna” is comedy rich in innuendo and roman à clef portrayals.  I’ve seen several of Jon Robin Baitz’s plays in the past, but this one is a little different from his usually serious efforts as a dramatist.  This play combines sharply written satire and terrific performances from a sold cast; all under the watchful and experience eye of director Robert Egan.

“Vicuna” is a biting commentary on America’s Presidential Election process in democracy every four years.  The 2016 Election results are now in but you have to see the play  in order to determine if it was indeed ‘rigged’.

“Vicuna” performs at the Kirk Douglas Theatre in Culver City, CA through November 20, 2016.