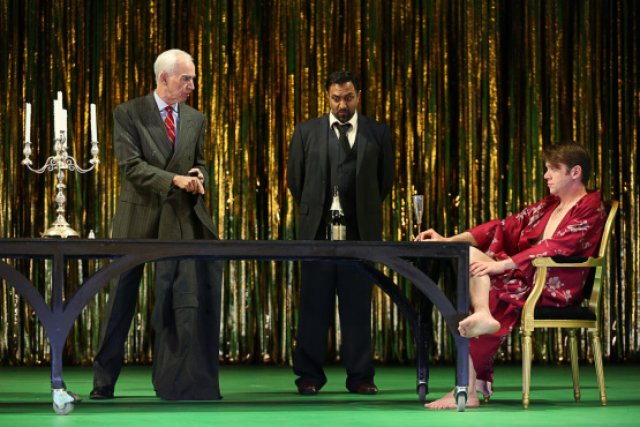 Don Juan, the legendary seducer, has been around for centuries. He’s shown up in an opera by Mozart, films, and even in a George Bernard Shaw play, Man and Superman which included “Don Juan in Hell.” Also, he’s been in poems (including one by Lord Byron) and as the model for any number of characters in novels, plays, movies and more.

But I had never known the Molière has a Don Juan, first produced in 1665, but less performed than his other works.

Westport Country Playhouse is giving us a delightful performance of a new adaptation of the Molière play written by Brendan Pelsue and wonderfully directed by David Kennedy.

Don Juan, a young nobleman, ridicules all moral certainties. He rejects religion and lives his life totally absorbed in what he wants and when he wants it. He seduces women with glee and even offers to marry them, gets into fights and denounces God. His father has given up on him and even his servant (Sganarelle) cannot abide him.

Yet he has a boyish charm as played by Nick Westrate. He looks at us with delight as he manipulates people to get his way; he is the eternal man child with no conscience or feelings for anyone but himself.

During the course of this play (two hours and ten minutes with intermission), we see his effect on everyone – from Dona Elvira the noble woman he seduced  from a nunnery, married and then deserted; to two peasant girls to whom he cleverly avoids declaring which one he will return for; to the man seeking to revenge Dona Elvira’s seduction.

He’s delighted by own cleverness and in some ways, we are too.

It isn’t a typical Molière play, but does include enough humor and slapstick comedy to identify it clearly as by the French master.

One of the joys are the philosophical debate – about duty, religion, morality – that take place between Don Juan and Sgarelle and those between two brothers who wants to kill Don Juan; one  but can’t because Don Juan saved his life but the other brother does not feel so constrained. Somehow a moral philosophy discussion in such an out-of-place situation adds to the fun.

Kenney has assembled a fine cast with most playing multiple parts.

But the play rests on the shoulders of Bhavesh Patel as Sganarelle and Nick Westrate as Don Juan. And what shoulders they have. Patel managers the stereotypical servant role – part manipulator and part commentator with panache. This servant can argue religion with the best of them and then quickly turn into the subservient, put upon and abused right hand man to Don Juan. He may be appalled at what Don Juan does, but Patel convinces us, he has no other choice but to abet him.

As Don Juan, Westrate charms us into being attracted to this amoral “bad boy” all the while being appalled at his manipulations and sins against others. The entire ensemble is fine; each creates one or more characters that are fully developed.

A particular highlight is the scene between Pierrot played by Carson Elrod and his girlfriend Charlotte played by Ariana Venturi. It is classic Molière

Kennedy’s direction not only keeps the play moving, but lets both Don Juan and Sganarelle speak directly to us. The scenic design by Marsha Ginsberg and the costumes by Katherine Roth do not attempt to put this play into the modern world, but maintain a semblance of the Molière period.

The program points out that many productions in the last decades have attempted to make Don Juan a symbol – from Bertol Brecht’s interpretation of him as the archetypical parasite to other interpretations that cast him as a man incapable of admitting mistakes, to one who challenges the accepted attitudes of society.

This production, can let you draw those conclusions if you wish, but its main focus is providing a enjoyable and funny evening in the theater.