A Critic Recalls Interactions with the Playwright 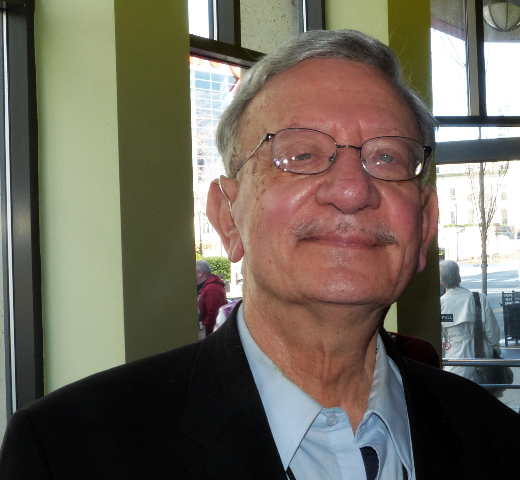 By way of obituary, several cultural-news TV programs have been re-running brief interviews which Edward Albee gave in recent years. Softer in tone than his more prickly famed remarks, they emphasize Albee’s genuine concern for audiences’ continuing to find their own personal understanding of his plays—not a bid for his own standing, but a dedication to his creations. Some years ago a young actor talked to me about Albee’s insistence on controlling productions of his plays. Albee had directed him, touring through several European countries with a company that performed not only Albee’s own plays but also plays of writers he admired like Tennessee Williams and Harold Pinter. The actor said, “Edward Albee has no children: his plays are his children; and that’s why he is so protective of them.”

When Edward Albee came to the New York State University’s College at Geneseo to give a lecture, he visited my class on the plays of Albee. During his visit, he seemed uninterested in much discussion with the faculty but completely open to talk with the students. One of my students asked him why he had stopped all-male productions of Who’s Afraid of Virginia Woolf?,>O? and Albee replied pleasantly that he would allow one if he had rewritten the play to make sense with four men. But he said that he had neither time nor interest in doing so, and therefore stopped such nonsense because he had never heard of a male couple who had gotten together because of a false pregnancy.

But he did allow his plays to change. I left him a message that I was going to point out in my review of Canada’s great Stratford Shakespeare Festival’s 2001 premiere of Virginia Woolf? that they had cut out dialogue, including the memorable opening dialogue in which Martha and George discuss their imaginary son --“the ‘bit’.” Edward phoned me to tell me that he had made that cut to shorten the playing time. By the 2005 Broadway revival with Kathleen Turner and Bill Irwin, he had cut the Act II scene between George and Honey and the “telegram” about George’s son’s death. I haven’t checked the current acting script to see whether such changes have replaced the originally published script, or perhaps are indicated as alternatives. But when I met George Grizzard who was appearing at Olney Theater in Maryland in 1966, he hadn’t seen the film with Taylor and Burton, and since I was then teaching the play and knew the dialogue, asked me what changes screenwriter Albee had made to the dialogue of Grizzard’s original role of Nick. I quoted two, and Grizzard exclaimed that he’d had nothing that raunchy to say onstage.

Many critics seemed to dislike Albee’s change to The Zoo Story by making it the second act of a new play, Peter and Jerry. I disagree that it weakened and softened the shock of Zoo Story, because the limited affirmation of the new Act I, “Homelife” enriches Peter with a grudging acceptance of his marriage but makes his tragic encounter with Jerry in Act 2 even more shocking. Edward’s instructions were to reread Zoo Story before reading the manuscript of “Homelife” that he sent me.

The standing and restrictions upon the official list of Edward Albee’s plays may not be clear until his estate is settled. I do not have Edward’s permission to release what he wrote to me in personal letters, but one conundrum is reflected in my letter to him about his interviews and production changes: “It’s interesting that you have talked about not rewriting any of your plays because you are now a different person and would improperly alter what they were; but you are nonetheless willing to cut and trim them, although not rewrite. Less is more, but more would distort?”

Most interesting to me is The Lorca Play that has been seen and read by a few, but that Albee did not permit to be published or produced again. He wrote that he would send a copy but never did. He clearly had hopes for it, but was not yet satisfied with it. Those who saw it or performed it in Texas say that it is fascinating and moving, but hopelessly long and large and expensive to produce. Still, the fact of one great, legendary, controversial modern playwright writing about another has much interest and appeal.

Edward was decidedly unsatisfied with what he had finished of his final play, a potentially hilarious satire playfully entitled Laying an Egg to tempt critics with an obvious punchline. In it, a man sits on his wife’s egg to hatch it. I suspect that it will not be allowed to survive.

When Edward Albee died, the social networks were inundated with spontaneous comments. One admirer reminisced about the exquisite instructions on preparing the perfect crème brulee in Counting the Ways and made me realize how many such excerpts have stayed in my mind over the years. I’ve been thinking about them like memorializing snapshots – all those stimulating tricks with words, like Agnes wondering whether she can say “I dropped upstairs” and Jerry asking about saying “A dog I knew.”

And there are so many “set pieces”: Jerry and the Dog from The Zoo Story and Tobias’s story of his cat in A Delicate Balance. Other nifty monologues include Tobias agonizing over his responsibility to his old friends in what Albee describes as “an Aria” in A Delicate Balance, the long monologues of the Long-Winded-Lady in Box and Quotations from Chairman Mao-Tse-Tung, and Martha’s “Clink!” speech and George’s story of the boy who drank bergin in Who’s Afraid of Virginia Woolf?.

There are sharp, funny monologues like Claire’s rehearsed Alcoholics Anonymous speech, “I am a alcoholic"; The powerful final monologues of Julian in Tiny Alice and the woman in Occupant (which remind me of Beckett’s Krapp’s Last Tape and Molly Bloom’s monologue that ends James Joyce’s “Ulysses”) --- these are some of the great excerptible speeches from Albee’s plays.

Albee’s The Man Who had Three Arms, a very funny burlesque of the scandal-loving gossip-press, was done in by antagonistic reviews and a terrible film that stole and vulgarized its plot. Albee didn’t want to dignify the filmmakers with a lawsuit. But only a few years ago, he told me that a revival was planned starring Martin Short. It apparently fell through, but we may yet see the comedy again.

An Off-Broadway revival of The Lady From Dubuque in 2012, starring Jane Alexander, received very favorable reviews. It had no serious revisions in text, but the treatment of the frantic husband by the mysterious agents of death who were helping his suffering wife to die seemed less cruel than in the brilliantly cast original production, which our critics disliked. Dubuque treats human loss and death with not so complete and shattering effect as Albee’s All Over; but both plays were underrated here and admired in England. All Over has been considered a great play in European productions, and should be re-evaluated here.

Albee’s surprisingly charming Seascape was revived in 2005 at Lincoln Center to amazed and affectionate reviews. An oddly cheerful fantasy about the reverse evolution that greets a contemporary aging couple with an equally married pre-evolutionary couple of giant lizards who educate them on the nature of survival and love, it is peculiar Albee but likely to re-emerge from time to time.

Later Albee oddities include his one play about homosexual lovers, Finding the Sun, and his playful, unscripted-seeming script for improvised-seeming exercises, Fragments. I wasn’t clear about how those two were received, and I wouldn’t try to predict how they will be received.

And there are segments that could easily be staged separately, outside their plays – as the first act of Tiny Alice with the Lawyer and Cardinal has been, in front of the curtain.

In sum, all these constitute a great and lasting family of human achievement. I hope to see them all again. Meanwhile, they will be read, studied and taught and appreciated.