Tony Winning Play on the Road

The Curious Incident of the Dog in the Night-Time 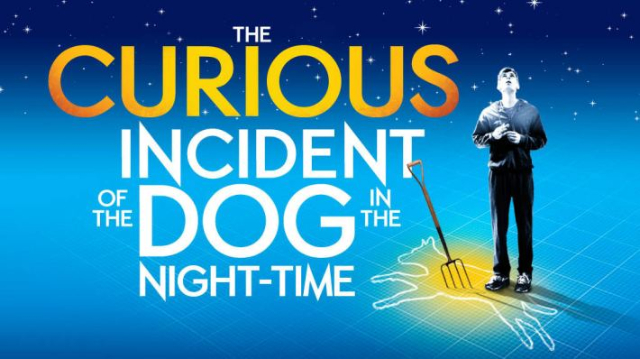 Many parents who speak about their special-needs children would probably rather talk about what their youngsters can do. In other words, they’d prefer to stress “ability” in the less-than-politically-correct phrase “disability” – even while acknowledging that their sons and daughters have limitations.

Similarly, the stage version of Mark Haddon’s novel “The Curious Incident of the Dog in the Night-Time,” ultimately leaves the audience remembering what its central character, Christopher Boone, accomplishes.
The positive tone set by playwright/adapter Simon Stephens honors Haddon’s intent, but takes the positivity a step further. Theatergoers can see how by witnessing a North American equity touring production of the National Theatre’s staging of the breathtaking, exhilarating , heartfelt and imaginative show.
It closed on Broadway in September after 800 performances (including 23 previews) and won five Tony Awards, including Best Play and garnering a host of other honors.

Based on the opening night performance at the Kravis, the production gets stronger after intermission.
Two actors alternate in the role of Boone, an autistic teenager who sets out to determine who killed his neighbor’s dog. While on the quest, he learns disturbing news about his folks and takes off on an exhausting journey that removes him from his comfort zone, bombarding him with all sorts of sensory overloads. It’s the kind of role that seems tailor-made for former Harry Potter star Daniel Radcliffe, if only he were a few years younger.

During opening night at the Kravis, the audience saw Adam Langdon as Boone, who can’t stand to be touched, becomes upset with disorder and lives in a literal, concrete world.
Unfortunately, it appears director Marianne Elliott instructed Langdon to speak just about every word with a hyper, forceful, panicky tone, turning Boone into a caricature. It’s as though Langdon expends all his energy while speaking even the most matter-of-fact sentences. This approach lessens the contrast between Boone’s calmer and more frantic moments. Furthermore, it can leave Langdon with little energy during the latter parts of the production.
That wasn’t the case on opening night at the Kravis on Tuesday. During the second act, Boone’s grunts, moans, shakes and unbending conviction that things be done his way all sounded and looked genuine, as did his moments of panic. It appeared as though he’d hyperventilate, yet remarkably he didn’t. For the most part, Langdon slips easily into the role and lives it.
Still, one couldn’t help sense that, at least for the first act, Langdon was upstaging the rest of the cast and the stimulating, astounding special effects were doing the same.

These effects, which take us inside Boone’s mind, are especially vivid, thanks to the talents of video designer Finn Ross, lighting designer Paule Constable and sound designer Ian Dickinson.
From watching the rapidly blinking lights to 3-D projections you might witness in a planetarium to a disco-like visual effect and harsh lighting, you might experience sensory overload.

It’s as though Christopher’s brain has mushroomed in size and we’re able to inhabit it. Characters speak at the same time, various symbols appear on the projection at a dizzyingly breakneck pace and intense light colors appear. The message is clear: Christopher’s mind is over-stimulated, leaving him pressing his hands over his ears. You get the sense he wants to scream “Quiet!!!” as all the effects seem to happen at once.

While the effects add up to a visual delight, they’re hardly something to savor for Boone, whose simple, orderly world of routine must remain intact for him to remain calm.
This world is deftly captured in scenic designer Bunny Christie’s symbolic set (she also designed the character-appropriate costumes).
The actors perform inside a box-like space in which straight lines form squares, suggesting predictability and sameness. The boxed space might suggest Boone’s mind.
The book and play are set in an English town a distance from London, where Boone lives with his parents.

Young Boone, who excels in math, is about to take his A-level examinations, featuring highly-complex equations and formulas. His life is interrupted when the boy discovers a pitchfork in the side of Wellington, his dog belonging to his grouchy neighbor, Mrs. Shears (an irritable Tiffany Rachelle Stewart).

The lad is advised to steer clear of the situation…but when Christopher Boone sets his mind on something, there’s no stopping him.
Boone’s quest to discover who killed the dog upends his life – not only because he discovers a shocking, life-altering truth, but he must enter a chaotic world with many people (he doesn’t like too many people around him). They’re largely uncaring people who don’t think like him and therefore can’t understand his mindset.
Director Elliot’s crew uses elements from horror and science fiction movies to create the sense of harsh, equilibrium-disturbing effects. Startling sounds cause a reflex action and at times you feel as though you’re moving with the set. Chances are you won’t get motion sickness (at least if you sit toward the back).
While we get a vivid impression of what’s occurring inside Christopher’s mind, the novel does a better job of providing insight into the lad’s thought process. But there are times when you don’t want to “listen” to Christopher in the book, such as when he’s describing an incredibly complex mathematical formula or analogy.
Reading the novel and seeing the play offer the most complete experience; just bear with Christopher as he goes off on his tangents.

Stephens’ play adaptation, like Haddon’s novel, features a framing device in which Christopher is writing his own book as the events in the story transpire. The play goes a step further, when it’s suggested that Christopher turn his book into a play (the one we’re watching). It’s a humorous blurring of the lines between fantasy and reality and reinforces Christopher’s busy, overwhelmed and perhaps fogged mind.

Mental Health Awareness Week has passed (it occurs during the first full week of October), but it’s never too late to try to empathize with people on the autistic spectrum and those with other special needs.

We live in a time when the relationship between white police officers and African Americans is greatly suffering. But there has also been tension between police and those with special needs. That tension is palpably illustrated in the novel and play.
Langdon, especially at the end, makes it easy to like Christopher, even if we don’t always understand his way of thinking. The young actor has the ability to convey a sense of triumph and accomplishment that endears us to him.