Everything is Illuminated Adapted by Simon Block 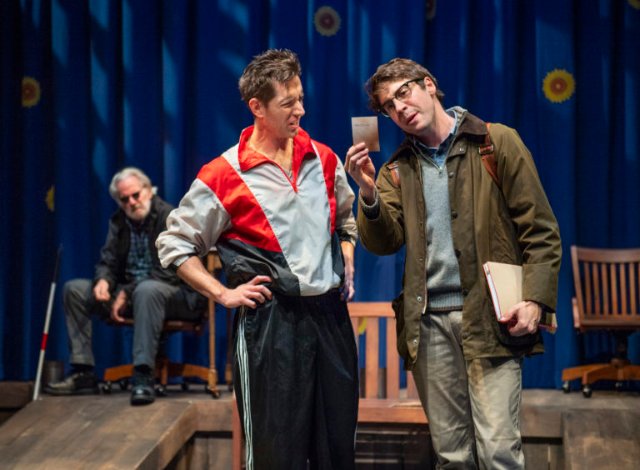 As a nation of immigrants, Americans are especially fascinated by our foreign ancestry, as if our individual identity is inadequate to explain who we are. DNA testing techniques claim to identify one’s ethnicity/nationality composition by percentages, while modern data search allows many to dig deeply into the family tree to identify specific ancestors. Some who are curious visit the homelands of their ancestors driven by a general sense of nostalgic identity, while others have specific objectives. No ethnic group undertakes these voyages of discovery with more ambivalence and trepidation than Jews. For the bulk of these emigrees and their descendents, those European countries whose culture and traditions they shared were the same countries that betrayed their families in most heinous ways.

In his semi-autobiographical novel, Everything is Illuminated, since adapted for the stage, author Jonathan Safran Foer fictionalizes his own origins-seeking experience with a touching and thoughtful story. In the 1990s, his character, Jonathan, ventures to modern-day Ukraine to find a stetl named Trachimbrod. Armed only with a pre-World War II photograph of his grandfather and a seemingly Gentile young woman named Augustine, he wants to personally thank her for presumably saving his grandfather’s life.

Jeremy Kahn captures the naive, diffident, yet persistent Jonathan as he coaxes his local guide Alex, played with pop-culture and sex obsessed glee by Adam Burch, to their destination. The third companion on the journey is Alex’s “blind” grandfather, who is the driver! Julian López-Morillas is marvelously irascible and overbearing as grandfather. Speaking Ukranian that Jonathan doesn’t understand, he constantly denigrates him as “the American Jew,” and undermines his objectives, insisting that Trachimbrod no longer exists. Alex sees this as an adventure, and though he is far from professional, he knows that word-of-mouth builds a business and wants Jonathan to be happy. The zeal to find answers, however, illustrates the maxim “be careful what you ask for.”

The portion of the play that deals with contemporary time is rife with cross cultural differences. But it’s not just the social practices, economic standards, and language that separate the author from his hosts, but the narratives that they live by. Jonathan is imbued with the unexpurgated version of World War II. The horrors of the Holocaust are shared within the Jewish community, and the history of World War II that is studied is written by observers without “skin in the game.” The history that Alex knows shares common threads with many written for national consumption within Europe. Each country in its own way tries to forget, deny, and exonerate its own people for the horrors committed.

Along with Jonathan’s quest of discovery, another story is interlaced. As a fiction writer, his imagination takes him on magical trips through his family’s history. Most of us have some thoughts about our genetic forefathers, but they are probably in the form of mental snapshots without much embellishment. Jonathan has generated a fantasy of characters and stories dating to the end of 18th century. He not only communes with his fictional ancestors, but he makes the interesting observation that he sometimes loses control over his creations. As many of us can confirm, sometimes thoughts and dreams arise that take their own direction, irrespective of what we wish.

Aurora uses a clever and entertaining approach in producing a road trip play. The car is comprised of chairs on coasters and a steering wheel. The characters use mime and the designers use sound effects for doors closing, car veering, and the like. Another application of these techniques is that the grandfather’s dog, named Sammy Davis, Jr., Jr., is invisible, but her sounds are highly audible and the physical effects on Jonathan are well revealed.

Kudos also for the use of Kendra Johnson’s masks. Significantly, Marissa Keltie plays several smaller female roles effectively with very different affect aided by costumery, makeup, wig, and mask that totally differentiate one character from another.  The same applies to Burch and López-Morillas’s in their secondary roles. Recognition goes as well to Lura Dolas who plays the old woman with appropriate hesitation and dignity. In all, the casting of this play is exemplary as are the performances. Finally, an acknowledgement is due to Tom Ross, who is one of the current wave of great Bay Area theater artistic directors who are moving on. This is the last play he is directing as the leading artistic force behind Aurora, and as expected, he’s done a fine job.

Everything is Illuminated merits its place on the stage. Not everyone will like it, but it should be respected for its poignant content,  interesting structure,  well-defined characters, and  ability to embrace humor and grief without loss of credibility. One criticism is that it does drag in parts. Soliloquies can go on a little long and some of the repetition about Trachimbrod’s not existing and the grandfather’s bigotry could be trimmed.

Everything is Illuminated, adapted by Simon Block from the novel of the same name by Jonathan Safran Foers, is produced by Aurora Theatre and plays on its stage at 2081 Addison St., Berkeley, CA through December 9, 2018.