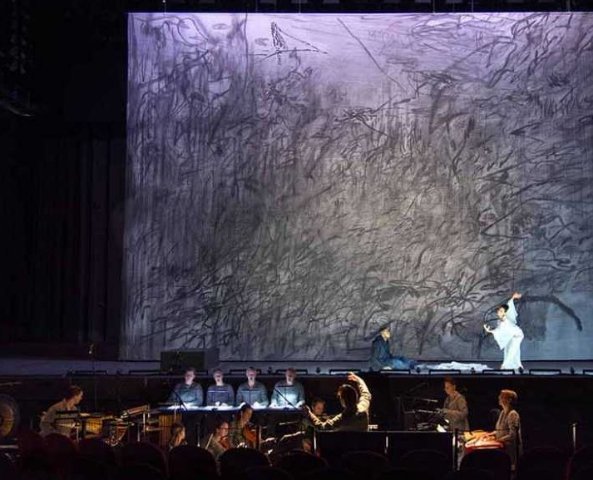 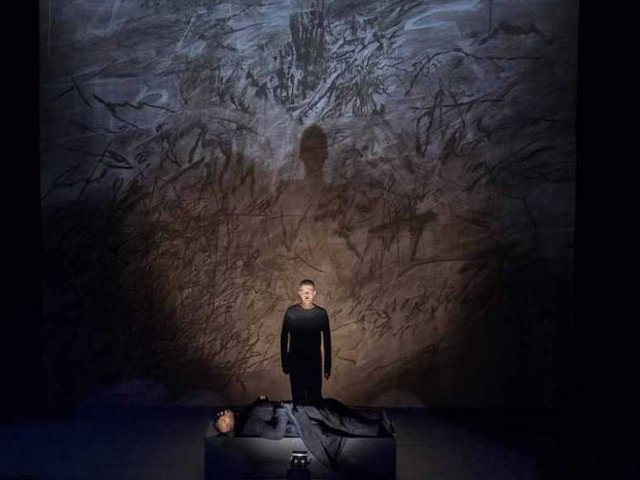 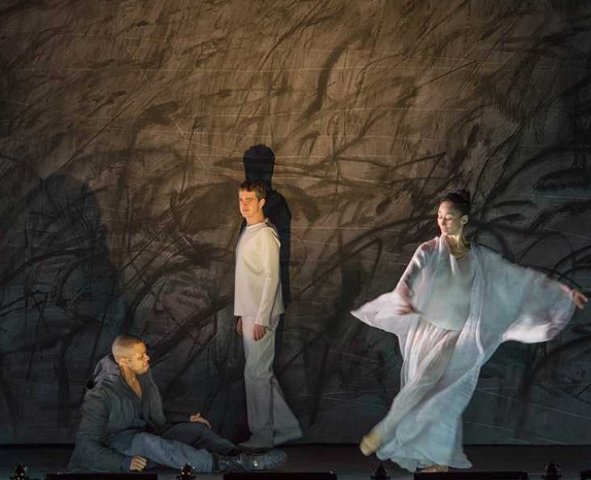 A fisherman, and an angel, who sings in one form and dances in another. 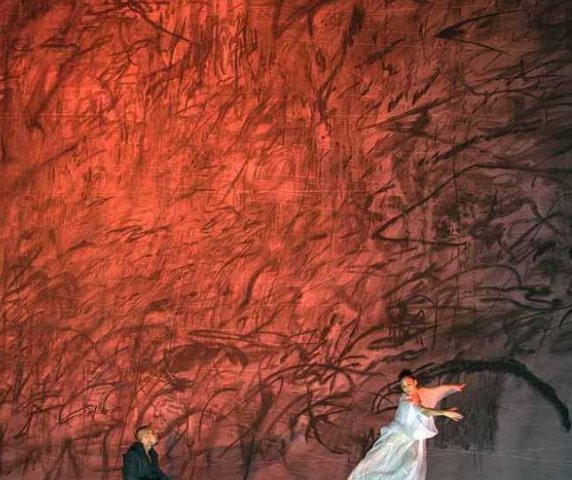 An angel dances for Davone Tines in Feather Mantle

Kaija Saaariaho weaves live music, enhanced voices and electronically generated extensions of the orchestra through the Rose Theater in Only the Sound Remains. Her opera based on two Noh stories is having its US premiere at the White Light Festival of Lincoln Center. This is an intimate work which succeeds mysteriously in filling a large space.

No one has a more sure touch in combining live music and music processed through electronics. Saariaho draws a myriad of textures into an intriguing whole. Her style is seductive and feminine. It is a pleasure to hear. For the first time, Saariaha composes for the delightful kantele, a Finnish instrument that resembles a lap harp which is part of the zither family. Saariaho successfully bridges the song of the human voice into the flute. She also imitates birds. Ernest Martinez Izquierdo conducted to bring forth all these subtle and delicious moments. Meta 4, a choir of four members, sang from the pit.

The background paintings of first-time stage designer Julia Mehretu have the same texture as the composer’s music. Three artworks are translucent drop downs. They are a tangle of lines which successfully merge as the music does. They also reflect the reeds and cattails of a river bank, near which many Noh dramas take place.

The contribution of lighting designer James F. Ingalls can’t be underestimated. His lights define the space in front of the painting and behind it. Sometimes a warm gold glow makes a face seem very present and yet disconnected and other worldly. Lighting gives motion to the ongoing drama.

Each story is about a missing item. In the first piece, a lute has disappeared. It never appears in reality, but is suggested by the shape of a monk’s cradling arms and also those of a missing warrior.

The white robe which is stolen from an angel by a fisherman in the second story is both feather light in the lighting and also seen as a weighty piece which burdens the fisherman’s dilemma. The angel is a double figure, sung by counter tenor Philppe Jarousskey and danced by the special Nora Kimball- Metzos.

In the interval between the first and second stories Peter Sellars, the incomparable director, remarked that one simply was swept into the world of the two singer. They wrap you in the pleasure of live and processed sound. Davone Tines bass a rich and steady baritone, which folds in to suggest pain and also expands in joy. Phillipe Jarousskey, the counter tenor, who is the warrior and angel, has an extraordinary counter tenor, wide in range. Saariaho wrote the angel originally for a soprano, but Jaroussey suggested he take on both roles and that the composer save the highest notes for the second story, when he would be warmed up. We were fortunate to hear them in all their beauty.

Sellars has used gesture to enhance the emotional resonance. The traditional squat of Noh and its spread elbow position are not apparent, but upward gestures of extended arms and smooth leg movements please the eye and lead us through the drama. A suggestion of sexuality excites.

The text is a translation of Ezra Pound, who knew neithe Japanese culture, nor the language.  It invites translation to other cultures.

Sellars has created a tapestry of Pound’s words, Saariaho’s music, singers and orchestra into a mesmerizing, quiet yet compelling drama.