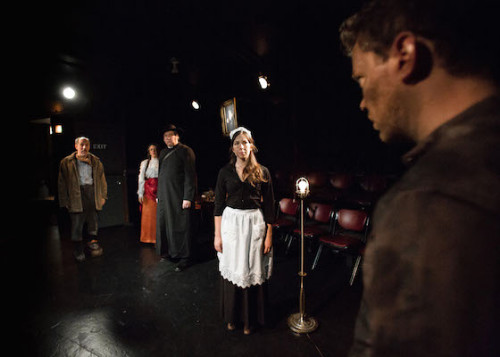 Mary-Arrchie Theatre's new production of Ibsen's Ghosts takes the great Norwegian playwright's scandalous 1881 play, shakes it up and spits it out in a witty contemporary form. And then punches you in the gut with its ending.

Greg Allen's clever adaptation of Ghosts by Henrik Ibsen is set "in a moribund historic store-front theater on the North Side of Chicago in its final season before it gets turned into bicycle storage for luxury condos." That about sums up the current state of Mary-Arrchie Theatre in its last season after 30 years of staging fine, thought-provoking theater. Fittingly, Ibsen's Ghosts is carried out meta-theatrically as a play within a play and the actors occasionally break the fourth wall to acknowledge the audience. This isn't done to excess, however, so it doesn't lapse over into cuteness.

As audience members arrive, Regina (Catherine Lavoie), in costume, greets us in rapid-fire French and hands out playbills. In the early part of the first scene, she continues to stuff playbills on the small table on stage.

Allen retains the basic story and dialogue of Ibsen's Ghosts. (This isn't a Stupid-Fucking-Bird variation where the original play is deconstructed and rebuilt into something new.) The story plays out in the Alving home on a fjord in Norway where the widowed Mrs. Alving (a powerful emotional performance by Carolyn Hoerdemann) lives with Regina, who seems to be a maid but actually is something more. Oswald, the Alving son (Gage Wallace), has just come home from Paris, where he lives a dissolute life as a painter. Mrs. Alving has used the money from her husband's estate to build an orphanage in his memory. The building is finished and the christening event is planned for the next day.

In the opening scene, Regina's father, Jacob Engstrand (Kirk Anderson) comes in from a storm to try to talk her into going back to the city to help him start a new business. Regina is suspicious of what her role would be ("Set my own hours? On my back more like!") and accuses him of inebriation. He explains his tipsy appearance with an Ibsenesque allusion: "I merely popped into the Wild Duck for a quick celebratory drink."

Pastor Manders (a larger-than-life performance by Steve Walker in this tiny space) arrives later to go over details of the christening and other financial matters with Mrs. Alving. She sits down at the small table, covered with books and papers, and picks up a copy of Ibsen. (All the books in the pile are copies of Ibsen's plays.) Mrs. Alving, whose late husband was a serial womanizer, is a woman of liberated thought, but the pastor reminds her that the Bible is the only book to read.

She disagrees, saying, "I read these and it makes me wonder: what is my role here? What are my options? Is everything really pre-ordained, as you always tell me, or are there things I can do, choices I can make which would change things, change my world? ... . There are so many stories here that seem to hinge on one person making a choice.... These books have made me see, really see, where I am and what my situation is."

Regina too yearns for her independence. When Pastor Manders tries to talk her into going with her father, she says, "All my life I've done my duty. I've played my role -- as an obedient daughter, a dutiful servant, a friendly host for a dramatic event. Now Mrs. Alving wants me to take care of little orphan children and teach them English. That's all well and good but what about me? What do I want? Who am I? I want to make my own choices, create my own destiny... I want to be the star of my own drama, or at least find out if I have one."

As the story proceeds to its tragic conclusion, we realize that all the characters are haunted by their pasts and look to the future with both dread and longing. The characters unveil their own stories of infidelity, rape, free love, venereal disease and euthanasia.

Allen's direction and the acting by the five cast members are excellent. Wallace is especially moving as Oswald, who first believes that his own lifestyle has caused his physical downfall and then learns that its real source was his father's debauchery. Lavoie's Regina is both sweet and headstrong; she is a Montreal native and has performed in many roles in her hometown.

Part of Allen's adaptation of the dialogue is Pastor Mander's creative cursing ("Jesus Christ on a Ferris Wheel!"), several dialogue exchanges on the word "gay," and Mrs. Alving's comment on how the "translators" really meant to describe the late Captain Alving. At one point, Mrs. Alving sits in the audience to watch a scene play out and, later, during the tragic final scene, she picks up a copy of an Ibsen book and reads some of her dialogue from it.

John Holt's simple set consists of the aforementioned table and a few pieces of furniture. On the left and right sides of the stage are doors marked "Entrance" and "Exit." No matter where the characters are coming from or going, they use the appropriately marked door, sometimes to the point of awkwardness. Scott Todhunter's targeted lighting is a series of spots around the playing area and one in particular was shining right in my eyes. Todhunter and crew could perform a lighting check with people in the theater seats and make some adjustment in the lighting.

Greg Allen is the founding director of the Neo-Futurists. Among his productions is The Last Two Minutes of the Complete Works of Henrik Ibsen in 2005-06. He calls Ibsen "the king of the outrageous climax."

Ghosts received an outraged reception because of its attacks on religion and open discussion of immorality. Its first production was in 1882 in Chicago by a Danish touring company to an audience of Scandinavian immigrants at the Aurora Turner Hall, on Milwaukee near Huron. The play was performed in Sweden in 1883 and had a single private performance in London in 1891. The Daily Telegraph referred to it as "Ibsen's positively abominable play ... An open drain: a loathsome sore unbandaged; a dirty act done publicly...." Although not performed as often as Ibsen plays such as A Doll's House, Hedda Gabler or An Enemy of the People, Ghosts holds up well and provides both entertainment and rich discussion material for today's audiences.

Ibsen's Ghosts, with a runtime of 2 hours, 10 minutes, continues through Dec. 20 at Mary-Arrchie Theatre, 735 W. Sheridan Rd. (just east of Broadway). Performances are at 8pm Thursday through Saturday and 7pm on Sunday. Tickets for $30 can be bought online or by calling 773-871-0442.