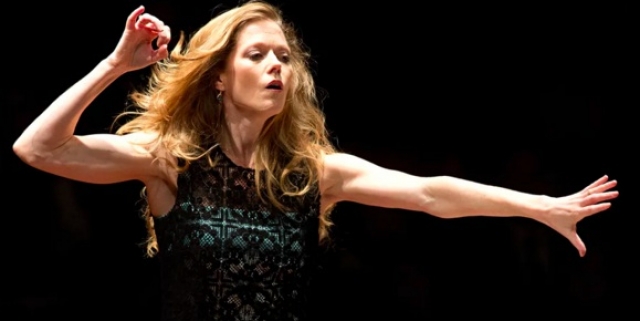 The lights in the corridor outside the Veterans Room in the Park Avenue Armory, dimmed to black and down the hallway proceeded the featured artist, Barbara Hannigan, bearing a candle. She invites the audience to join her in the room where Reinbert de Leeuw, her piano partner, is already playing.

Inside the room,  the top had been removed from the grand piano’s sounding board. Although the music of Eric Satie is spare, the room is filled with sound.

Hannigan seems in complete control, yet she is improvising, having only learned the Satie Death of Socrate recently. She spends much time setting the scene as the evocative pianist de Leeuw plays Satie’s uspud. Hannigan proceeds up a narrow winding staircase to a balcony set back over the room. There her hair flies lushly over her eyes and is then thrown back. Her arms are held in statuesque positions, and recall choreography she has undertaken in past roles and also Greek statuary. At the end, she hangs over the balcony in distress.

Hannigan descends to sing all four roles in the Satie Socrate. In constant motion, she is able to bring her lovely pure tone to the singular vowels the text provides, and to use a miraculously controlled breath to create the shape of lines.

One would never guess as she sings that this music has been declared boring. If the phrases are relentlessly reiterated, in Hannigan’s take they become a lively dialogue and a lesson in the gracious acceptance of death. No Dylan Thomas' raging.

Satie wrote that he hoped that the low dynamic level and slow pulse would help the audience focus on the words. Hannigan and de Leeuw seem to ask at once, then why music? And they make its tempi and skimpy note values, quarters and eights only, positively fascinating.

Hannigan, in gesture and movement, gives a Greek feeling. Plainchant chatters may dominate the composition, but they are energized by the singer in motion.

Satie wanted the work to be as white and pure as antiquity. What this dramatic performance achieved was a return to classical simplicity with a modern sensibility.

Coming from Thomas Adès most recent opera The Exterminating Angel, one imagines that the role of the opera singer was modeled on Hannigan.  She is the go-to soprano for contemporary composers.  Singing Agnes in George Benjamin's Written on the Skin, Hannigan is indelibly imprinted on the ear and eye.

Adès invited her to perform Leticia Maynar, the opera's singer role. She turned him down.  For her, the range demands of Adès writing are beyond her comfortability.  She notes, with admiration, the iron lungs of Audrey Luna, the soprano who is now creating the Adès' role in New York.

Hannigan is deep in obsession with Lulu, Alban Berg's creation based on the Lulu novels of Benjamin Franklin Wedekind.  She conducts the Lulu Suites all over Europe and plays the demanding title role in Hamburg in the current season.  Chortling, she suggests that this version of the opera is 'too Wedekind' for the United States.  Who will take up the challenge of this remarkable artist?