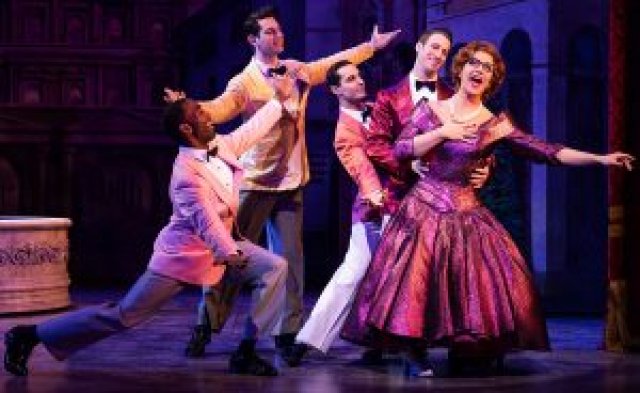 Photo by Matthew Murphy Dorothy Michaels (Santino Fontana) is at the center of attention in the musical adaptation of the popular 1992 film, Tootsie.

So it comes as no surprise that, even though the musical will close on Jan. 5 after 293 performances and 25 previews, the show’s producers have already planned a North American tour. It will begin in October 2020 at Shea’s Buffalo Theater.

But theater lovers and fans of the 1982 film still have time to learn why the musical will close for a reason other than lack of quality.

Indeed, the multi-Tony-winning live show improves on the film. For instance, Robert Horn’s book and David Yazbek’s witty, diverse and insightful score add depth to the characters’ relationships. Also, the songs, ranging in genre from Broadway to funk and Afro-Cuban, allow the characters more fully to express their feelings and thoughts.

Take, for example, the propulsive “Whaddya Do.” The argumentative, stubborn, yet indomitable Michael Dorsey sings the number almost at the show’s beginning. The melody practically possesses a marching, hard-charging beat. And this reinforces the fierce determination Dorsey possesses to succeed, despite casting directors and others turning him down. In addition, the clever lyrics, also by Yazbek, suggest defiance.

Certainly, Santino Fontana, who earned a Tony for his portrayal of Michael Dorsey/Dorothy Michaels, begins the show with a credible air of defiance and determination.

But Fontana’s characters are ultimately likable because Yazbek’s songs and Horn’s book take him on an emotional journey. Specifically, through Dorsey‘s character arc, he undergoes a seamless transformation. It begins with a selfish male performer and ends with an inspiring female leader and agent for positive change.

So, when Fontana and the ensemble sing the triumphant “Unstoppable,” we feel Michaels has earned the praise. Sure, she’s unstoppable. But that’s not the case solely so she can advance her career. Rather, one cannot stop Michaels from bettering shows and their casts. In Tootsie, the show in question is Juliet’s Curse. It’s a weak sequel to Shakespeare’s Romeo & Juliet.  Even so, thanks to Michaels’ influence, the show’s producer changes it to the more favorably titled Juliet’s Nurse.

In the movie version of Tootsie, starring Dustin Hoffman and Jessica Lange, Dorsey is also a talented but difficult actor who cannot land a role. That’s because he’s selfish and argumentative. However, when he learns that his girlfriend fails to land a soap opera role, he tries to turn his own career around by dressing as a woman. As is the case in the musical, he calls himself Dorothy Michaels and auditions for the soap opera role.

With Tootsie’s adaptation into a musical theater piece, it made sense to change the show-within-the-show to a musical. And while he was at it, Horn celebrated theater as an art form. This allows aficionados to enjoy the play, even if they’re unfamiliar with the film.

The movie and the play empower women. Specifically, both argue that their voice and work matter as much as the efforts put forth by men. Of course, society in 2019 values such a message even more, with the MeToo movement’s formation. As a result, a male boss referring to a female subordinate with a dismissive, even sexually-suggestive term as “Tootsie,” is particularly demeaning in the present.

Fortunately, in the stage adaptation, set in present-day New York City, Michaels improves the play-within-the-play – and the morale of its cast. That stands in contrast to the movie, in which the character has little to no influence on the soap opera’s quality.

“Dorothy, you have turned this show into a joyous anthem for all women,” a character in the musical opines.

True, Michaels is a greater force for positive change in the play. However, she isn’t the only inspiring and strong female character. Co-star Julie Nichols is also a stronger, better drawn character than in the movie.

In the Broadway production, Lilli Cooper endows Nichols with an infectious zest for life and a positive spirit. Of course, that is largely due to the character’s participation in live theater. In the expressive, inspiring song, “There Was John,” Nichols sings about her transformation from a “girl in the bubble” at school to an outward, happy performer who is “exactly where I should be, and everything’s okay.”

Without a doubt, the relationship between Michaels and Nichols was touching in the film. And Lange, who won an Oscar for her portrayal, acted with emotional potency, as did Hoffman. Still, one senses a richer relationship between Michaels and Nichols in the play. That’s largely due to the music, which includes the poetic number “Who Are You.” Its melody carries an air of mystery. Through the song, one character seeks to learn more about the other. But the song poses another question.

“Who am I?” Michaels sings. “This is a different story. Something completely strange.”

In fact, even Dorsey’s friend and roommate, Jeff Slater, may not be truly able to figure out the enigmatic actor.

Not that Slater would stress over such a question.

He’s laid back, and Andy Grotelueschen hilariously plays him as a wisecracking, lackadaisical fellow. Nonetheless, he obviously cares about Dorsey.

The actor, along with several others, possess deft comic timing. They earn laughs in Horn’s funny, Tony-winning book.

Even silence earns laughs in this production, as it does during several uninterrupted seconds of it at the top of Act II. It comes after an error by Michaels potentially jeopardizes “her” success and hilariously complicates the relationships in her life.

They include the inept and emotionally fragile Sandy Lester, who lets the tiniest thing overwhelm her. She sings at least one patter-like song, which reinforces how fast Lester’s head must be spinning as she comes apart emotionally. In the role, Sarah Stiles’ comic abilities are obvious. She earns every laugh by remaining true to her character. Most impressively, she doesn’t botch one word while singing the tongue-twisting lyrics.

Meanwhile, Reg Rogers is a buffoonish narcissist as the womanizing director, Ron Carlisle. Rogers plays him as a comic villain who doesn’t realize how silly he sounds or looks during his antics (think actor Daniel Stern.)

Also, John Behlmann turns in a comedic, yet earnest performance as wide-eyed, manly Max Van Horn. He’s one of several characters who gain confidence thanks to Dorothy’s empowering, positive presence.

Speaking of Dorothy, Fontana, with his rangy voice, sounds so much like a woman you hardly believe a male actor is behind the make-up, lipstick and wig. Not only does he convincingly sound like the opposite sex, he’s s able to convincingly convey emotions and sing in that voice. It betrays confidence without arrogance and humbleness without sentimentality.

More than once, Dorothy rises from the bottom of the stage on a platform. As she ascends, she sports a red dress with sequins. It’s a similar outfit to the one that Hoffman wore in the film. The difference: costume designer William Ivey Long, who’s responsible for all the character-defining clothing, uses a shimmering sequin invented within the last 10 years.

Meanwhile, scenic designer David Rockwell dresses the stage with an outline of the New York City skyline. Rockwell has noted that it possesses masculine traits (for example, the skyline is imposing). Yet, it also contains a “feminine grace.” This duality reflects that of the show’s protagonist, he further noted. Other detailed scenic elements seamlessly float on and off the stage.

In writing this compelling adaptation and setting it to music, the artists have created a splashy, big old-fashioned Broadway-style musical. It comes complete with marquees, energetic dancing and a traditional overture.

Perhaps that’s why the show’s creators have termed Tootsie a “Comedy Musical” instead of the other way around.

But while some of the comedy is of the lower variety (i.e., some of it is farcical), there’s also fodder for thought.

Is Michael Dorsey truly a champion for women?

Or did he only play Dorothy solely to advance his career?

Tootsie continues its Broadway run through Jan. 5 at the Marquis Theatre, 210 W. 46th St. in Manhattan’s theater district. For more information about Tootsie, and to buy tickets, visit tootsiemusical.com.