Kev Berry at The Tank 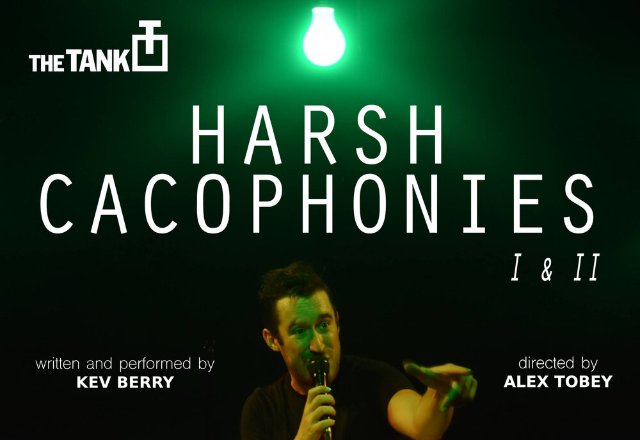 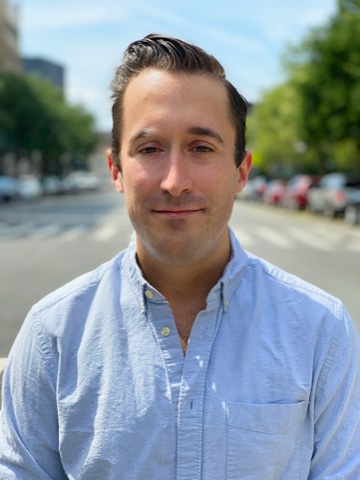 Kev Berry is an award-winning playwright and  superb monologist.  In Harsh Cacophonies I & II, he is directed by his usual collaborator, Alex Tobey. It is set on the stage of a small black theater. Imaginative lighting by Christine Tang adds to the show’s engaging preseatation. Light in the ceiling and back stage wall takes on different shapes and configurations, like a night sky.  Different colors play across the stage floor to suggest mood and temperament. Tang has created a set out of light. Sound design by Christian Roberson miraculously changes microphone amplification and weight to alter the texture of Berry’s voice when he morphs into other characters.

The monologue was created in three separate pieces, which can be performed as stand alones.  The three are joined for this production and work well together.  Two hours fly by, in part because Berry performs in a manic state. His speech and stories are always clear, but often rush. This locates us in the urgent terrain from which his stories grow.

Berry’s character in the monologues is bracketed by God.  "I" starts out participating in Catholic rituals. As a boy, he is entranced by priests’ dramatic long robes and swinging balls of incense, He will outgrow church. Later he writes his father a letter of gratitude for permitting him to no longer attend mass.

Recovering from alcoholism, Berry grapples again with God, who is everything from Good Orderly Direction, to the knot in your sneaker lace. The embrace of a higher power comes more easily to Catholics, even those who are no longer observant. That manifests in Berry's struggle with AA.

This context gives a richness to the evening which also focuses on what it means to be gay. Berry's description of dates that go nowhere is both funny and sad.  This entails his wonder over gay men’s obsession with physical fitness as the essence of attraction. His pick-ups at the Ninth Avenue Saloon peg him as classic, but also sensitive and curious about some of the tenets of being gay.

There is a lightness to heavy topics.  Berry’s gestures probe, challenge and humor tough topics.  He is queer and his place in the world and in God’s universe, cause him to wonder.  We wonder with him.

Berry creates the kind of theater he likes. It is big. Two hours is long for a monologue, but this one feels big, not long.

Berry makes theater to his own order: Verbally gymnastic. It grabs you and doesn’t let go. It pushes you away with relentless grotesqueness, but your eyes are glued. He makes you stop breathing and second-guess everything you thought you knew.

This piece is bold, engaging, surprising.

Founded in 2003, The Tank is a multi-disciplinary arts presenter and producer. It provides a home to emerging artists working across all disciplines, including theater, comedy, dance, film, music, puppetry, and storytelling. It is led by Artistic Director Meghan Finn.

The appropriate music includes: "Can You Feel It," The Jacksons; "Don't Leave Me This Way," Thelma Houston, by Cary Gilbert, Kenneth Gamble and Leon Huff; "Got to Give It Up," Marvin Gaye; and Leonard Bernstein's "Mass a Theatre Piece for Singers, Players and Dancers."