The Band's Visit at the Bushnell 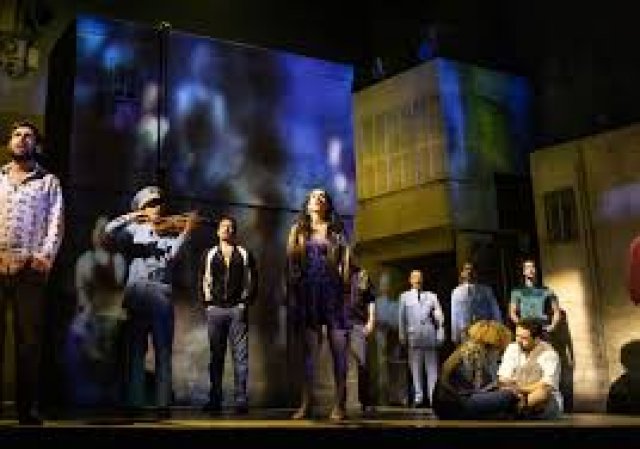 The Band’s Visit which is now at the Bushnell through Sunday, Nov. 21 was the surprise award winner of the 2017-18 season. It won 10 of the 11 Tony awards for which it was nominated, including Best Musical, Best Director, leading actor and actress, supporting actor, outstanding score and book as well as awards for lighting, sound design and orchestrations. It beat out competitors from Mean Girls, Frozen, and revivals of My Fair Lady and Carousel.

Now this intimate, quiet show is on tour in theaters much larger than its original homes off-Broadway and even on Broadway.

Does it translate to larger houses and bigger audiences?

The answer is “surprisingly well.”

The Band’s Visit is almost a chamber musical; limited cast, no big dance numbers, no flashy sets or projections. It tells a simple story, but one that slowly creeps up on you and, if you let it, packs an emotional wallop.

It’s based on a 2007 Israeli film that won critical acclaim and success.

Into an Israeli desert town, a group of Egyptian musicians show up by mistake. The city they were to travel to in order to perform at the opening of an Arab Cultural Center and this small town are very similar in name; just one letter differentiates them.

Stranded in the town until the next morning, they interact with the residents.

In some ways their stay creates the only excitement the town has and it also changes many of the residents.

These are ordinary people with ordinary problems. Some feel trapped in the town; others want something they can’t really explain. Relationships have problems, sadness permeates some, and others are just waiting for who knows what.

As the musical plays out, the residents and the band members learn about themselves and often become “unstuck.”

A major part of the appeal of this show is the music by David Yazbek. This talented Broadway composer (The Full Monty, Dirty Rotten Scoundrels) has created a score that hints at mid-Eastern music in tonalities and instrumentation.

The cast is headed by Janet Dacal as Dina, the owner of the cabaret and Sasson Gabay as Tewfiq the conductor of the band. Gabay is a well-known Israeli actor who originated the role in the film.

The most beautiful songs go to Dina and Haled (Joe Joseph), who plays a member of the band who can charm any woman. If you don’t find “Something Different” or “Haled’s Song About Love” enchanting, you should listen to them again.

From the opening song “Waiting” to the closing song “Answer Me,” this show demonstrates how touching heartfelt emotion and real people can be.

Dacal is excellent as Dina as are the other cast members including Jospeh, Clay Singer as the floundering new father and Cory Getzug as, his father.

If I had one complaint, it was that the accents were so strong that at times, I wish there were supertitles for the dialogue. I know missed things.

Open you heart to The Band’s Visit. For tickets visit Bushnell.org.