Barefoot and Brazen Tao Makes a Case for the Piano 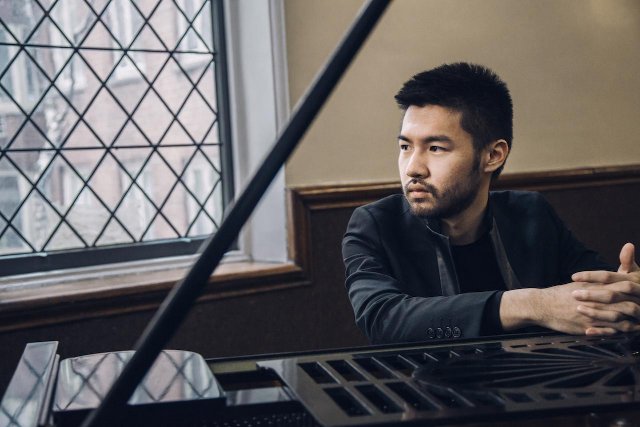 The young musical polymath Conrad Tao made his debut at Carnegie Hall.  In an ambitious program, designed in part to display the elements of virtuoso performance on the piano, Tao played representative composers from J. S. Bach to David Lang and Julia Wolfe.

Like Dr. Albert C. Barnes assembling his art collection with specific notions about how and where the paintings should be displayed. Similarly, Tao has assembled his program to give us new clues and new insights about music composition,  piano and the delivery of sound.  Tao clearly designed the program to introduce us to unexpected aspects of music.

It may be that the elements of the virtuoso are exposed.  Controls of widely varying dynamics were on display.  The physical parts of performance are of infinite variety. A forearm, wrist and hand hovers over the keyboard, wondering whether demands will be made to execute whispers or bangs signifying everything.

Tao reports that he has never played a two part program in New York.   For the first half, he was dressed in a suit, looking like a respectful, even obedient artist.  He stripped down to tee-shirt and casual pants after the intermission.  For the entire program he was barefoot, able to feel the cool pedal which he so judiciously deploys.

Moving from a soft breeze to the crashing cacophony of multiple notes jammed together more like noise, the sounds of the piano are released in previously unimaginable tones.  Rippling phrases and almost painfully slow and lovingly defined single notes compete in Tao’s hands with loud chords.

A Jason Eckardt composition was performed first in the second part of the program.  Brilliant young pianists like Jason Hardink and Tao seek out Eckhardt’s work.  Eckhardt started his musical career as a guitarist in a heavy metal band, but had an epiphany and became a classical music composer. What he brings to the keyboard are a special sense of jazz rhythms, poetry and previously unheard sounds.  His Echoes, White Veil, is based on a W.S. Merwin poem that intrigued him.  Tao brings out all the detail and colors in his virtuosic performance.

Following was Robert Schumann’s Kresleriana. Schumann had been inspired by the fictional musician created by E.T.A Hoffman.  Schumann probably was depressed and not suffering from tertiary syphilis as some historians would have it.  (Untreated depression has some to the same symptoms.) In writing this work, we both hear the beauty of Schumann’s soul-searching and the mad runs which signal his efforts to soothe himself.  Tao is a performer who leads us through a work as though both he and we are hearing it for the first time.  This evening’s performance was no exception.

When he proposed to play a David Johnson piece as an encore I crossed my fingers.  Would Tao sing?  He did and it was a moving conclusion to a wonderful evening introducing an important artist to Carnegie Hall.