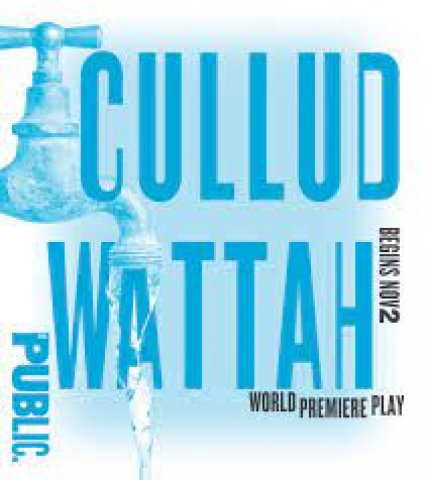 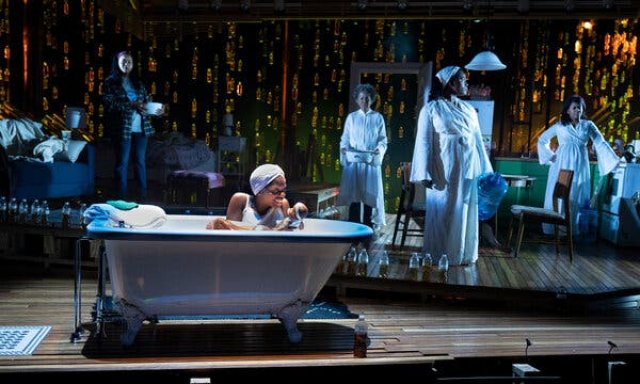 Profound contradictions are dramatized and shown throughout the drama. Adam Rigg (scenic design) creates a cozy furnished home of a working class African-American family surrounded by a macabre curtain of plastic bottles of dirty water.

The play begins with a glimpse of a child's  harrowing nightmare. Kara Harmon re-enforces the feeling of the contradiction with her costuming. The stark pallor of the nightmare, and the unremarkable clothing of the everyday, accents the grim foreboding framing the family's lives. Lighting by Jeanette Oi-Suk Yew, and sound by Sinan Refik Zafar enhance the effect.

We are in Flint, Michigan, 2014. The water source has been switched from the clean water of Lake Huron to the polluted waters of the Flint River. This is purportedly a money saving move by the state government. Poison is literally seeping into ordinary lives.

Three generations call this house home. They depend primarily on the earnings of Marion (Crystal Dickinson) a lifelong worker at the General Motors plant. Her husband was killed in Afghanistan. She was left her to raise two girls, the feisty teen-age Reesee (Lauren F. Walker) and the much younger Plum (Alicia Pilgrim).whose cancer is in remission. Her mother, Big Ma (Lizan Mitchell ), and younger sister, Ainee, (Andrea Patterson) who has spent years in rocky recovery from drug addiction, also share the home.

The distorted reality of their lives weaves relentlessly through the quotidian. The sound of running water fills a bathtub. The water is a rusty foul liquid. “Take your shower” Marion calls to her daughters as they prepare for bed. “Remember to keep your mouth closed in the shower.”

Different layers characterize generational perspectives. Everyone's everyday struggles are increasing plagued by the contaminated water. Unpleasant tastes and repugnant odors demand that bottled water be purchased, though the water bill still must be paid. Water to drink, to wash with to brush one's teeth, water for baths, water for a cup of tea, water cooking Thanksgiving Dinner-- all must come from bottles.

Jones keeps the actors focused on the rising tension in their lives as they discover that the water is not just dirty water, it is poison. For nearly two years the people of Flint live in this grim reality.

As time goes by, inconvenience has begun to become catastrophic. Plastic bottles of clean water fill almost every surface. The sickly Plum demonstrates her proficiency in arithmetic by adding up the number of bottles of water required for each basic need. Reesee looks inward for self-identity as a gay young woman. Marion plans for a possible new man in her life after seven years of widowhood.

For all the planning, we feel an ominous curtain surround the family. As Marion puts on a pretty dress for her date, odd lesions are evident on her arms and legs.  The eerie sense of being poisoned by water grows.

Dickerson-Despenza paces the tension between personal victory over obstacles and the need for united social action.  Characters teeter between relying on old solutions and finding new ones.

Who can one turn to in a time of need? Walker is a pleasure to watch as Reesee turns toward African spiritualism, sure that Jesus has let the family down. Big Ma knows from her own life's experience that the UAW Union will pull through for the workers and that faith in God is what everyone needs to give them strength. Marion has always been there for her family, and believes her dedication to her job at General Motors will see them through.

The magnitude of the problem defies these reliable forces, pushing the family to confront their own strengths and limitations.

As Ainee's pregnancy becomes precarious, Patterson gracefully moves this least self-actuating familly member into a position of leadership. She is the most willing to join with other Flint residents and file a class action suit. Will this move jeopardize Marion's job at GM ? Could it mean help, or could it mean the loss of the only thread that allows the family to survive? The drama leaves us wondering.

Ironically, in truth there is a happy ending. In the same week that this drama opened. CBS News reported. “A federal judge has approved a partial settlement that will provide $626.25 million to tens of thousands of Flint, Michigan residents who for years were impacted by exposure to lead in their drinking water. “

Cullad Wattuh's run is extended through December 12.  Get tickets here.