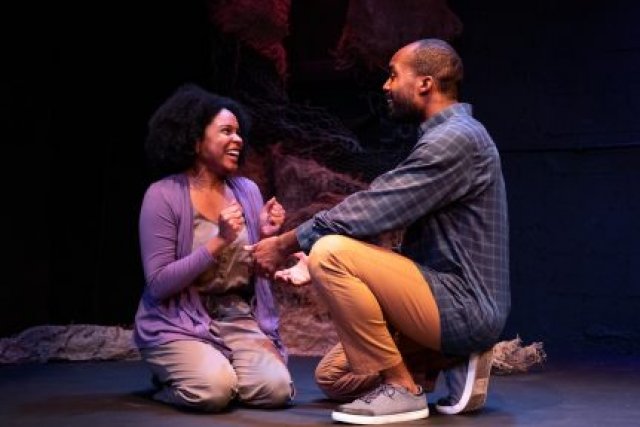 Photo by Ryan Arnst Marlo Rodriguez and Denzel McCausland appear in one of the more upbeat scenes in Lungs.

In Duncan Macmillan’s devastating drama, Lungs, a woman and her lover’s decision to have a kid could come with dire consequences. Let her explain.

“I could fly to New York and back every day for seven years and still not leave a carbon footprint as big as if I have a child,” she says. “Ten thousand tonnes of C02 (carbon dioxide). That’s the weight of the Eiffel Tower. I’d be giving birth to the Eiffel Tower.”

Is the woman overthinking and catastrophizing? Perhaps. But today, when climate change, a pandemic, political unrest, terrorism, and more are combining to keep people on edge, a couple may understandably hesitate to bring a human being into a troubled world. In fact, there might be many couples suffering while thinking similar thoughts.

Fortunately, one of the many things that live theater does well is give voice to people silently suffering. Lungs, whose running time is less than two hours (no intermission) speaks to a new generation of folks. They have come to know uncertainty as the norm. And while it might bother them, for whatever reason, they may not be open about their thoughts and concerns.

Kudos, then, to Macmillan. He has written a taut, timely, brutally honest, and compelling play. It succinctly and elegantly communicates what may be the concerns and worries of many. The Ft. Lauderdale-based professional, nonprofit New City Players is presenting Lungs. It is a partially problematic production at the intimate Island City Stage in Wilton Manors through Nov. 28.

While the playwright doesn’t specify a setting or time period, New City Players has set their production from 2011-2061. It is a span of 50 years. So, if the baby is born in 2011, he will be only 50 by the time “much of the earth has burned, ash falls from the sky and coats familiar surfaces each day, and chaos and unrest is the norm.”  Director Elizabeth Price wrote those words in the program.

Does the unnamed couple in the play really want to subject their son or daughter to such circumstances in what is still the prime of his or her life? Certainly, the couple in this production faces greater pressure to make the “right decision,” whatever that may mean, than in a production that does not end with Planet Earth largely in ruin so soon.

But this is hardly where New City Players’ production falls short. Instead, the highs and lows of the characters’ relationship receive greater emphasis than the couple’s anxiety about the future when it comes to having a child.

To be sure, Marlo Rodriguez, as the unnamed woman, conveys at least a sense of overwhelm. Further, she seems credibly hyper and restless, with telling facial expressions and frequent, appropriate hand gestures. And Rodriguez does not miss a beat during a more than one page-long, largely pause-less passage. In it, her character speaks while taking few breaths. Unquestionably, it is a difficult task. However, Rodriguez not only pulls it off without stumbling, she also credibly conveys the emotion behind the words.

What is lacking in Rodriguez’s performance is a credible sense of dread as the character is about to make perhaps the most important decision of her life with the earth crumbling before her eyes. For example, at one point, the male character tells the female that she’s hyperventilating. Yet, we hardly get that sense.

As for Denzel McCausland, who plays the unnamed man, the actor imbues him with a laid back, calm, and patient demeanor. These traits create a character who is credibly comforting to his girlfriend. But McCausland largely fails to invest his character with a sense of being torn between two important choices when time is of the essence.

The actors are at their best when they are acting out their relationship. For instance, they lovingly and tightly embrace, hold hands, and place their arms around each other when all is good between the characters. Conversely, the performers, with director Price’s help, create believable tension when the characters’ relationship breaks apart.

In Macmillan’s fast-paced, urgent play, he sometimes requires characters to interrupt one another before one of them has finished a line. To the actors’ and the director’s credit, these interruptions seem spontaneous. Also, the actors use pauses to positive effect. For instance, they use them to vary the play’s pace. When Macmillan’s characters are not interrupting each other, they are often speaking in one- or two-word sentences during rapid exchanges. In fact, sometimes the rapid pace makes us feel as though we’re free-falling toward an uncertain, scary future.

A sense of uneasiness suffuses the production even before the “curtain” rises (actually, there is no curtain; the director, from the instant we enter the theater, thrusts us into the unsettling world of the play). Before the action commences, one hears slow, sad, unnerving music. We also hear raindrops falling and birds chirping. It is as though the music is foreshadowing a bleak future for birds and other creatures. Just as the play begins, we hear heavy breathing, a heartbeat and sirens. The sounds build to a crescendo before the characters begin talking.

Curiously, the unnerving music and other sound effects end when the action starts. Including these sound effects, and music during the action would help reinforce a sense of uneasiness as the characters try to decide whether to have a baby.

Chances are, the playwright’s decision not to name the characters or specify a locale and time period was intentional. By not including this information, and not providing with many details about the characters, Macmillan reinforces the idea that these people could be anywhere in the world, facing the dilemma before them.

As a matter of fact, the production’s scenic design does not place us in any specific locale. Instead, the dominant piece in scenic designer Kathe O’Donnelly’s set is a tree. It is comprised of chicken wire and burlap. A liquid material binds it all together. The tree, which branches out across part of the stage, looks fragile. This fragility can symbolize the fragile earth, which, over the course of this production’s 50 years, slowly succumbs to the disasters which climate change brings on. The only other real set pieces are two boxes on which to sit. Appropriately, they are gray, reinforcing the play’s bleakness. Altogether, the set is enclosed and sports a grayish color.

Desirae Merritt’s lighting design creates focus and mood. And of all the colors she uses, green is most effective. It symbolizes the color of much of Earth.

Credit Macmillan for not offering easy answers to the question at the heart of the play: Should the couple in the piece bring a human being into a world plagued by so many troubles – and, by giving birth, possibly add to the problems?

If you don’t leave the theater with an answer, Lungs will leave you with a lot to think about and discuss.