Thoughts of a Colored Man On Broadway 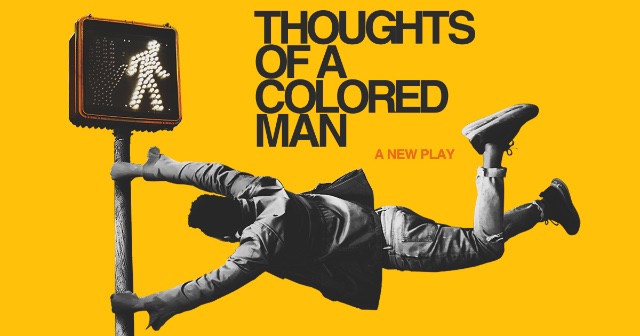 Thoughts of a Colored Man on Broadway

Keenan Scott, playwright, objected to the widespread notion that black men don’t express themselves. In his play, Thoughts of a Colored Man, they do. Our conventional notions of black silence are shattered by a rich rhetorical tradition of the group that Eldridge Cleaver called the most challenged in American society. In some ways not much has changed since Cleaver made that statement over a half century ago. Black men have an expiration date that expires before everyone elses'.

Seven characters are named for various emotions, which reflect real life. “Soul” recently played ping pong in Bryant Bark. They share with each other what it means to grow up as a young black man. How do we stop the black man, one character asks. He answers, We kill the boys.

This is not a play that whines. It is hard-headed reality yet warm.  Particularly touching are conversations the men have.

In delicate poetry mixed with point-blank truths, Scott pictures the world of the ghetto, the impact of gentrification, growing up with and without Dad.  Happiness asks if he is not black because he was brought up with a father. Steve H. Broadnax III directs to make clear the difference between the characters and the commonality of their plight.

The stage is sparsely decorated. A cat walk separates the action on the stage floor from the projections which set place: a Whole Foods Store, Joe’s barber shop, the figure of a woman undulating to a beat, the lyrical heart of the story.

Drama is created by the birth of a son (and grandson). We see the difficulties of a gay black man who wishes to become part of the entire black community, basketball and the NIL rules under which suddenly college athletes will control their name, image and likeness. Black men are beginning to think of themselves as brands. They should.

Depression, an MIT graduate is now on the floor, organizing shelves and dealing with customers at a Whole Foods.  How has he ended up here? He quit his job to take care of his mother.  A customer, Happiness, says it is wrong to give up your career for family. Depression  does not think so, but he is interrupted by a bossy female voice asking him to clean Aisle nine.

This play moves deeper and deeper into black men's souls.  It does not complain, nor does it shirk the monumental issues of growing up black in America.

The warm humor of the barbershop, which Ice Cube memorably introduced across the nation, shows how comraderies among black men gives them a place which is exceeded only in importance by mother and God

There is a list of fatherly aphorisms, some unfamiliar like: "When in doubt, know that the barbershop is our sanctuary."  "If you’re not the smartest person in the room, be next to the person who is."

There are even the dozens, not as raunchy as those of a decade ago where “Your mother plays ping pong with Kong Lpng’s ding dong” was a frequent snap on a stoop; Maybe more caution is taken today when you take up family insults.

We have watched and listened to magnificent performances by  Bryan Terrell Clark as Happiness.  “I jog in the hearts of all who accomplish their dreams."

Tristan Mack Wilds as Anger: “I am that dream deferred, that forgotten raisin."

Dyllon Burnside as Love. “Baby, you make me wanna dream."

Luke James as Passion:  “I drive through the veins of dreamers."

Esau Prtichett as Wisdom: “Why not dream? If we didn’t dream, we would cease to exist."

Forrest McClendon as Depression: “Our ancestors endured centuries of being property, merely holding onto a dream of us having more than they could fathom. They wanted us to live amongst the stars they charted for us. So why have we settled for the dim light of the moon and not bask in the sun? All we ever wanted was to be ourselves…to live."

The play ends with the song which set the play. "The sun kisses my skin And I ask the Lord to take away my sins And one day, one day if I keep on praying, The Lord will let me into heaven." In the beginning, Anger responds: "I woke up. I could find the sun nowhere…in the hallways, I’ve seen the same tiles in prison."

As the song interweaves through the play it gains hope.

It is rare to have a big message delivered in wonderful art. Thoughts of a Colored Man does this. It's a must see for everyone.