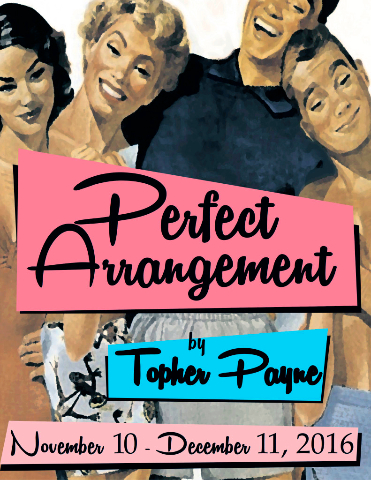 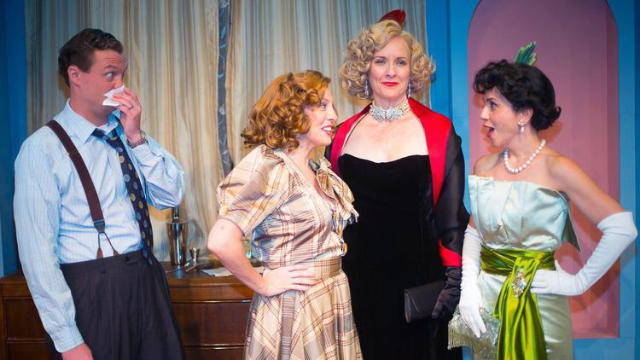 As people march in defiance in the wake of Donald Trump’s election, fear may be lurking beneath their façade of unapologetic rebellion.

Some individuals, particularly members of minority groups, feel their rights will be taken away.

In this climate of uncertainty, anger and even panic, a production of Topher Payne’s potent, multi-award-winning comic-drama “Perfect Arrangement” seems especially timely and appropriate.

The leadership of the multi-award winning Island City Stage, a bold and daring Wilton company near Ft. Lauderdale dedicated to “producing theatrical experiences that positively impact the LGBT and general community,” apparently realizes that.

Island City Stage, for the most part, is solidly staging the smartly-written play through Dec. 11 in the theater’s extremely intimate space.

The small auditorium draws us into the world of the play even before the performance begins, as there’s no curtain.

Payne’s cleverly-written play focuses on an effort in the 1950s similar to Sen. Joseph McCarthy’s “Red Scare,” an attempt to identify and penalize those sympathizing with communists or who’ve embraced communism.

“Perfect Arrangement” centers on an effort to track down and fire homosexuals who worked for the U.S. government. While hundreds were let go from their positions, same sex couples, referred to at the time as “deviants, fought back.

Many consider the Stonewall Uprisings of 1969 to be the earliest emergence of a gay rights movement. But as Payne illustrates with surprising and copious amounts of humor that aid his storytelling, an even earlier stirring took place alongside McCarthy’s Communist witch hunt.

“It’s 1950 and new colors are being added to the Red Scare,” the back of Payne’s script reads.

In the play, a gay man and a lesbian face a conundrum: They work for a unit of the State Department and are tasked with ferreting out the very people who share their sexual preference. Nobody within the department knows or even suspects that the characters, Bob and Norma, are gay.

What are they to do?

They’ve decided to marry each other’s partner as a cover.

The plan is successful to a point, but complications get in the way. Accusations arise, blackmail is threatened, allegiances are challenged and motivations questioned.

In the end, the main characters are faced with the conflict at the heart of the play – remain safe but unhappily stuck in their arrangement, or stand up for their beliefs and identity…even if it means risking ostracism and possibly worse.

The drama and comedy complement each other. Take the character of Kitty. She’s a scatterbrained, but well-meaning woman and the wife of ruthless Theodore Sunderson, the characters’ demanding, no-nonsense boss.

Kitty might serve as Payne’s vehicle in which to bitingly satirize people who remain complacent in the face of injustice. Do such people choose to look the other way under such circumstances? Or perhaps they mean well, but are just so uninformed, so out of touch with reality that they naturally focus on inconsequential things in a dire time.

Kitty, in a blissfully unaware, matter-of-fact tone, refers to gay people as “fags.” But before you decide to strangle Kitty, keep in mind the time period. People believed that, far from being part of a person’s identity, homosexuality was a mental disorder.

Troy J. Stanley exudes inhumanity and elitism as Theodore, whom you could easily envision as one of McCarthy’s right-hand men. Stanley invests Theodore with a commanding, business-like and uncaring demeanor, the boss of one’s nightmares.

The other characters are better drawn, and the performers who play them present multi-faceted, authentic performances. There are some weaknesses; at times, responses come too quickly, robbing the proceedings of spontaneity. Also, performers sometimes have a tendency to lower their voices to the point it’s hard to hear what they said. But the acting is generally strong and convincing.

A hulking Matthew Stuart Jackson is commanding, stiff and intensely determined as Bob Martindale, a World War II veteran and gay man whom Theodore has assigned to fire deviants.

Martindale brings a fire to the role, accentuated by wide eyes that appear as though flames will shoot from them at any moment. Jackson also excels during casual moments, bringing to Martindale a laid-back, jokey demeanor.

Daniel Capote has a playful aura as Martindale’s lover, Jim Baxter, suggesting a mischievous manner and vivacity. Capote also displays his dramatic acting skills, conveying an authentic sense of concern about how he might never again get a job as a teacher if and when he’s found out.

In contrast to Kitty’s lack of sophistication and giddiness, Arlette Del Toro plays the knowing Norma Baxter with a level head, suggesting a smart woman quick with a wisecrack. And Erynn Dalton has an observant air as Millie Martindale. She also brings the necessary quick-wit to the character.

Kim Ostrenko deftly, with a hint of slyness, plays the bitchy Barbara Grant who could bring down Millie with one act of blackmail. The two women go way back. Millie’s actions during a previous working relationship with Barbara might come back to bite her. Ostrenko, who, like Jackson, is tall and imposing, brings a dark, threatening quality to the character.

One of the play’s passages contains stinging, sarcastic humor spoken by Millie and directed at Bob, who criticizes his wife for her past actions with Grant.

Bob: “Well, Mildred, if you’d been a little more discriminating in your choices, instead of,,,taking up an extracurricular.”

Millie: “I am not going to defend choices I made before I even met you, Bob. You’re right, when I was nineteen years old I wasn’t giving proper consideration to how a teacher (Grant) I screwed in Canada could eventually marry, change her name, divorce, move to America, begin working for the government, and threaten my marriage of convenience to the State Department’s chief inquisitor. Why oh why did that never cross my goddamn mind?”

During the reviewed performance, Dalton delivered that passage with such forceful, naturally-sounding bitterness and irony that the audience applauded.

“Perfect Arrangement” is that rare play that works while including farcical elements, riveting suspense and intense drama without being convoluted. All genres and styles work in service of Payne’s story…a tale of the lengths to which some people might have gone to keep their identity a secret as a cover so they could interact with the larger community and work.

The curtain inside the duplex is appropriately closed, reinforcing the characters’ need for secrecy and there are no windows. The characters are safe in the elegant, no doubt expensive duplex, which McClain has designed with an attention to detail and mood. Colors such as peach and light blue, highlighted by Ardean Landhuis’ realistic lighting, suggests a cheery atmosphere that masks the gravity of the characters’ situation. They are, indeed, living a lie, pretending to be happy, heterosexual, content couples.

In reality, characters enter and exiting from the closet. It’s a, smart, symbolic choice on Payne's part; in the era in which they live, they’re forced to be closeted homosexuals.

During one of the play’s farcical moments, Jim is making love to Bob. The doorbell rings.

The following exchange happens with lightning speed and is played with perfect timing.

In 2016, when the LGBT community has “come out of the closet,” it’s invigorating to see how far society has come since members of the aforementioned community were considered mentally ill deviants.