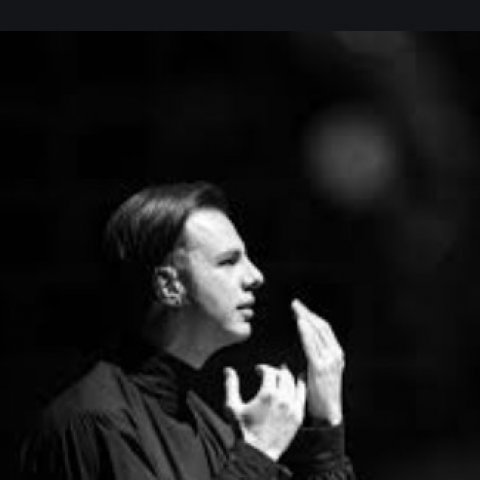 Teodor Currentzis Conducts the Verdi Requiem at The Shed

The Verdi Requiem conducted by Teodor Currentzis with the musicAeterna Orchestra and Chorus is performed at The Shed through November 24.  The McCourt is a grand space and  can seat 1,250 and hold 2000 standing. Designed to be flexibly conformed, this performance has bleacher seats extending from the floor before the stage up to the rafters, or heavens if you will.

The stage stretches across the space, terminated at either side by walls containing the sounds and sending them out to the audience.  While only a thin skin separates the McCourt from  traffic zooming below, the space is quiet.  It may not be perfect for the singers, who are miced for this performance, but the sound is pleasing. We were treated to trumpets to the left and right of the auditorium.

Jonas Mekas' filmed response to the Requiem does double duty on two large screens mounted above the performing artists.

We are enveloped in darkness, listening to the hushed footsteps of the chorus and orchestra members as they enter McCourt.  Only a gleaming Robert Graham jacket decorated with sequins forming a rose catches the eye.  This heralds tenor Rene Barbera, currently the go-to singer for the Requiem.  He is one among many eagerly awaited artists for this performance.  Having been sent by the Portuguese Ambassador to sing for the Marchellin in Rosenkavalier at the Lyric Opera of Chicago, Barbera has been favorably compared to Luciano Pavarotti.

Light, darkness and spotlights on the soloists call attention to individual artists and also to the divergent moods of the work.

The room goes completely dark before the artists enter.  The last man in is Teodor Currentzis, whose obsession with the Requiem in Russia, where he works regularly with this orchestra and chorus, has led to this new interpretation at The Shed.

Musically, it is his call for dynamic variety that distinguishes this performance.  He dares to create the sounds which stand at the brink of inaudibility.  This makes the contrast with moments of loud, brutal rage all the more piercing.  Subtle sound volume moves throughout the production engage the soul. The orchestra stands as they play, clothed in long monk-like robes. They are precise, committed and produce glorious sound.

Currentzis early on came to a crossroads.  Would he become a professional singer or a conductor?  Choosing to conduct, his second love is evident always.  He sings the entire Requiem as he conducts.  Singers near him do not hear notes, but they do hear the sounds he emits.  He is generous to his singing artists, kind as only someone who is deeply appreciative of their craft can be.

Marina Abaeva, soprano, started with vibrato in her voice.  By the time she arrived in the midst of the chorus, spotlighted, Currentzis has directed her voice to the purity of a chime.  She makes a compelling case for 'deliverance.'

Clementine Margaine, a Riccardo Muti favorite, has a particularly rich mezzo, distinguishing herself at the start in her plea for 'mercy.'

Bass Evgeny Stavinsky has also been singled out by Muti (who of course channels Verdi directly).  Stavinsky from his first notes signals that 'creation will be judged' in firm authoritative and beautiful tones.

Currentzis may achieve his wide-ranging detail in service of magnificence not through the movement of his hands, but specifically through his fingers.  Each finger is extremely long and thin and appears double-jointed. Fingers constantly work, one distinguished from another.  The little finger wiggles through decorations.  The index finger points to an entrance.  The index finger and thumb can be joined for the conclusion of a phrase.  All the fingers can also move wildly at once as the 'guilty groan' and 'the damned are silenced.'  Currentzis’ hands are a work of art. There is always purpose in this five-finger exercise in dynamic beauty, both humility and grandeur delivered.

Currentzis has a sweet face. Some complain that there are too many rehearsals, but the end result pleases the conductor.  We the audience are overwhelmed and thrilled.

The accompanying Mekas’ film consists largely of lovely flower blossoms at close, medium and long range. Moments of nature’s violence are depicted in rain and wind. Mekas' images remind us of beauty in the quotidian as they accompany Verdi’s transcendent moments.

The Shed is a wonderful addition to New York culture.  You enter a venue with an crowd that represents the group all New York arts institutions strive to assemble.  All colors of the rainbow and all ages are represented.