Middletown: The Ride of Your Life!

A Co-production of Actors' Playhouse, Miracle Theatre and GFour Productions. 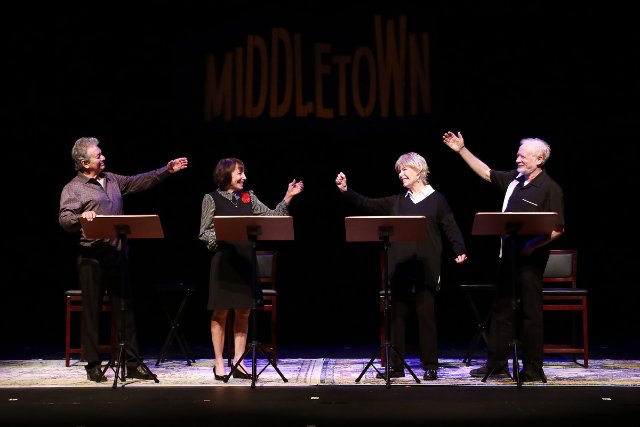 Photo by Alberto Romeu Cast members act out an upbeat moment from Middletown: The Ride of Your Life! by Dan Clancy. Pictured from left are Adrian Zmed as Tom, Didi Conn as Peg, Loretta Swit as Dotty, and Donny Most as Don. 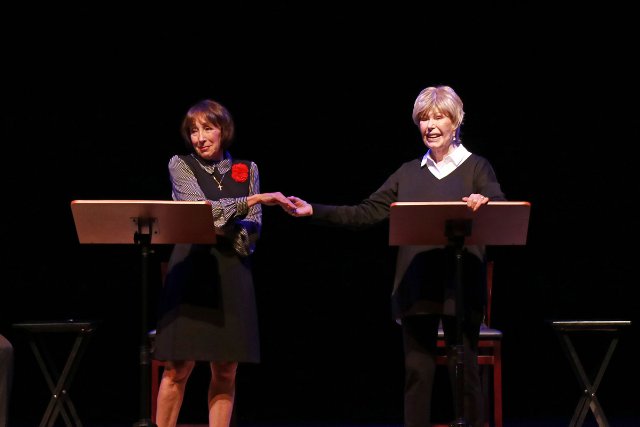 Photo by Alberto Romeu The characters in Middletown: The Ride of Your Life! support each other through good times and difficult moments. Pictured from left are Didi Conn as Peg and Loretta Swit as Dotty.

As a playwright, you know you have done at least part of your job well when you make it hard for an audience to part from your characters.

Such is the case with the likable people who populate Dan Clancy’s new play, Middletown: The Ride of Your Life! It is a relatable, universal, humorous, and honest tale of friendship, as well as life’s joys and difficulties. The play, which will stick with you like glue, is touring nationally this year.

South Florida residents and visitors have the chance to hop on board and become attached to the characters. Specifically, a sweet but sincere, heartwarming, and heartbreaking co-production is running through Dec. 12 at Actors’ Playhouse at the Miracle Theatre in Coral Gables.

The presenters are the nonprofit, regional, professional company, Actors’ Playhouse and GFour Productions. The latter is a Ft. Lauderdale-based producer of shows, from Broadway to the West End.

Middletown takes place in and around Middletown, N.J., from 1976-2021. In the play, two couples, Peg and Tom, as well as Dotty and Don, eat dinner together every Friday night for 33 years. The couple met when their children were in kindergarten. And they have remained steadfast friends, spending happy times with each other and supporting each other through difficult times.

The show begins in the present, and flashes back, before ending where it started, in the present. The play, which features seamless transitions between moments, is about remembering, Peg tells us early on. Specifically, she is looking back on her and her husband Tom’s friendship with Dotty and Don.

Peg, evoking Our Town’s Stage Manager, tells us, “As you can see, there’s no scenery – no props – just a few lights. Simple – it’s how I like things. We didn’t even memorize most of the lines. I’m at the stage in my life when I’m not sure if I forgot something, or I never learned it in the first place. So, you’ll be read to, and who doesn’t love that?”

More specifically, the actors, seated behind music stands, perform with their scripts in front of them. There is no blocking.  Obviously, this is not traditional live theater. Indeed, we are not sitting back and watching a seemingly real world in action behind the imaginary “Fourth Wall.” Instead, in meta-theatrical, Brechtian fashion, the characters address us and point to the fact that we are watching a play.

Clancy has explained why he wrote Middletown without blocking, props, scenic elements, etc.

“I wanted to tell a relatable ‘every-person’s’ story in a direct and straightforward manner where human emotions are front and center–without bells, whistles, special effects, or props,” said Clancy, best known for his play The Timekeepers. It ran off-Broadway and in Israel for 13 years. “I wanted the words to speak for themselves.”

And the fact that the actors are using scripts does not get in the way of them bringing recognizable characters to credible, vibrant life. The performers emote convincingly through spoken words, make eye contact, and form telling facial expressions and gestures to fully inhabit their characters. They merely glance at their scripts from time to time.

There is a good chance that you have seen at least one of the actors.

Didi Conn, whom you might recognize from her work in Grease, plays Peg. The performer imbues her character with a sweet, modest, charming, and friendly disposition. Conn is also convincingly angry during one of the play’s tenser moments.

Adrian Zmed, whom you might have seen in TJ Hooker, portrays Tom, conveying affability, and credible shame during an embarrassing moment.

Loretta Swit, from the TV show M*A*S*H, embodies Dotty with a fun-loving, life-embracing demeanor. And Donny Most, of Happy Days, lends Don a charming and outspoken manner.

Eric Nelson’s lighting provides focus, and its intensity matches the mood of a particular moment.

GFour Productions CEO Seth Greenleaf fluidly directs the production with sensitivity and an attention to detail. He ensures that the characters come across as flesh-and-blood human beings, never caricatures.

Clancy, as Thornton Wilder does in Our Town, takes us on an emotional journey that runs the gamut of the human experience. Specifically, the story serves up humor, joy, sorrow and conflict through life cycle events and simple gatherings. Certainly, parts of Middletown will fill you with happiness and laughter. Other parts will cause sad tears to form. But even during Middletown’s difficult moments, the playwright injects enough humor to make the action bearable.

During most of the pandemic, we relied on Zoom and computer screens to keep us connected to friends and family. However, many of us especially missed physical contact, gathering in person with friends and family and enjoying each other’s company, mask-less and unconcerned about getting sick simply by being near them.

Middletown: The Ride of Your Life! reminds us just how much we missed it.

Middletown: The Ride of Your Life! runs through Dec. 12 at Actors' Playhouse at the Miracle Theatre, 280 Miracle Mile in Coral Gables. Performances will take place at 8 p.m. Wednesdays through Saturdays, and 2 p.m. Sundays.

In addition, exclusive talkbacks with the cast will take place immediately following the performances at 8 p.m. Fridays, Nov. 26, Dec. 3, and Dec. 10.