Girls of the Golden West in San Francisco 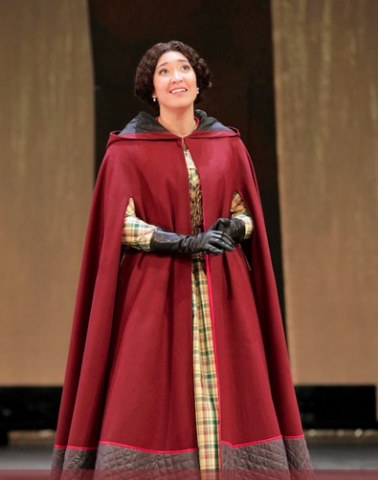 Julia Bullock, a powerful Dame Shirley in Girls of the Golden West 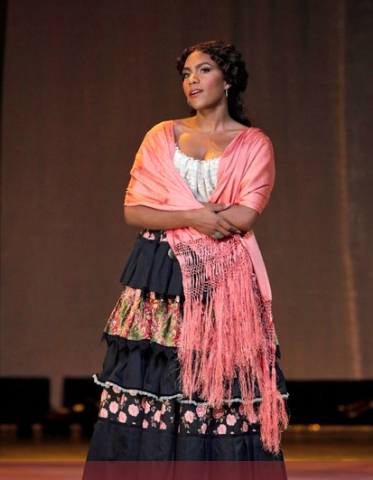 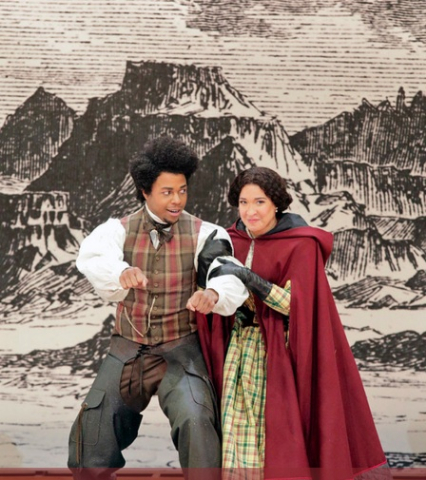 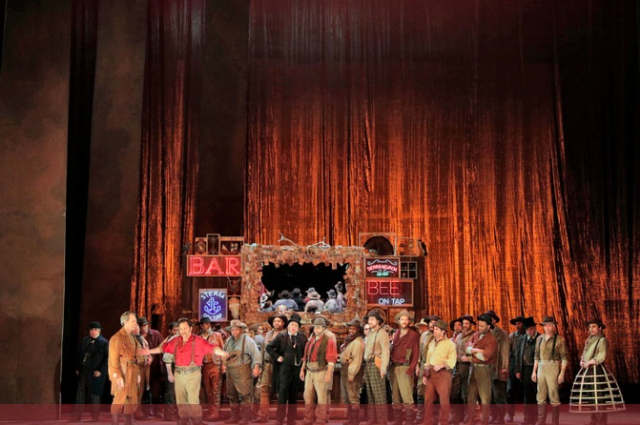 Ryan McKinney and Paul Appleby with the other miners 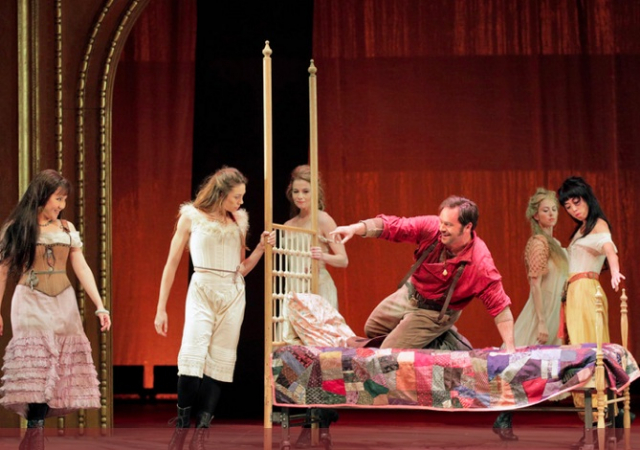 John Adams' celebration of his 70th birthday is crowned with a new opera, Girls of the Golden West, which enjoys its world premiere at the San Francisco Opera.  Drawn to the character of the eastern-born wife of a doctor who re-located to the west coast at the time of the Gold Rush, Adams and his frequent collaborator Peter Sellars have crafted an unfamiliar and compelling picture of a powder keg mining town in the Sierra Nevada mountains.

These mountains are home to Adams. Part of the draw of the subject was the challenge of creating the natural world with which he is often surrounded.  He chose to compose a spare orchestral accompaniment to match the crude and stripped down setting.

The unusual focus in the first act is on individual singers, who address us.  Julia Bullock, taking on the role of Dame Shirley, uses all the beauty and drama of her soprano to capture the language of the poetic letters Dame Shirley wrote home. She is a forceful presence during the entire opera.

Descriptions of both nature and the gold rush characters are memorably drawn by Bullock, taking on the challenge of Adams' lyrics in both bold and stretched lines.  She is attracted to the driver of her wagon, a black cowboy Ned Peters, who is sung by Davóne Tines, even more striking here than he was in the recent BAM presentation of Crossing.

The opera company cast many young singers, whose aspirations and eagerness for success mirrors that of the mining community.  Paul Appleby sings Joe Cannon, a challenging role in which he portrays cuckhold, lover, and drunk, as well as a man who seeks good fortune.

Singers often describe a world to the audience as we watch the background activities of the mining town. In the first act, individuals are the focus of attention. We join in appreciating the descriptions, both verbal and musical.

In the second act, the chorus of miners becomes prominent. Some of the liveliest music is created by the group, directed by Ian Robertson.  Lusty, angry, greedy, their voices charge through the opera house.

Here the main subject of the opera emerges. The gold rush brought together Chinese, Mexicans, and Americans into a melting pot that was any thing but.  Cultural differences, vicious ethnic attacks and insults abound. The creators note that these elements have always existed in our country. Are we doomed to shove each other aside, be cruel and even kill our neighbors?

J'Nai Bridges who is a graduate of the Ryan Program at the Lyric Opera of Chicago, has grown since we first saw her sing a wood nymph in Rusalka. She is an engaging, primal figure in Girls, her voice becoming richer and her range broader. The drama of her situation is enacted and also embedded in the moving notes she is assigned.  Her lusty mezzo makes clear why men of all stripes and colors want her. She loves Ramon, sung in a tender yet full baritone by Elliot Madore. So many striking young artists have more golden talent than the strivers they depict on stage.

The stratospheric notes that give contemporary opera a thrilling new sound are sung by Hye Jung Lee as Ah Sing, a perfect name for a character that produces never-before-heard sounds.

John Heginbotham choreographs a delightful entertainment, presented on the huge stump of a redwood tree, the center piece of the second act. On the stump, Lorena Feijoo does a wild dance of the spider.

Grant Gershon conducts with verve.  Sellars, as always, weaves his tale with a fascinating duality of the individual character and the wild world with which humans have to contend.  As the opera settles in, the connection between the reflections and direct address of the first part may merge more smoothly with the rough and ready elements of the second.  Adams and Sellars always intrigue and bring both serious stories and great good humor into a lively evening of opera theater.