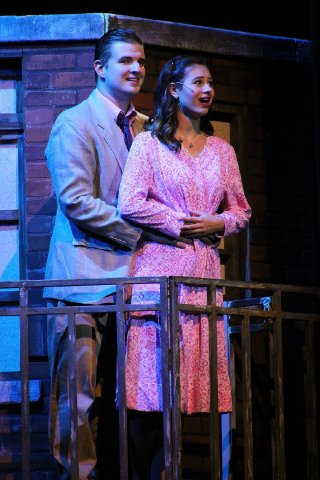 Photo by Carol Kassie Jacob Tarconish appears as Tony and Alexa Lopez as Maria in West Side Story at the Lauderhill Performing Arts Center. 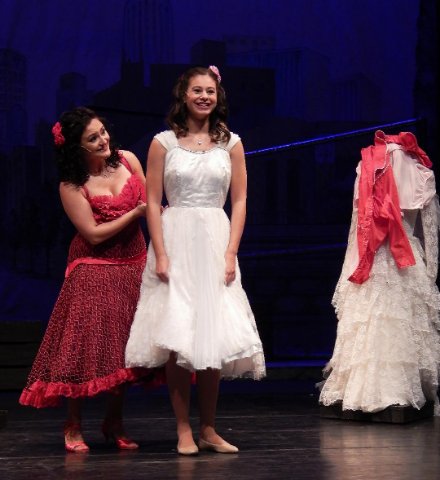 It is virtually impossible to walk away from West Side Story without vividly remembering something.

But one of the beauties of a classic is that with each new viewing, you’re liable to discover something new.

And in Broadway Palm’s gorgeous and gut-wrenching production, one walks away newly aware of collective guilt. That is, each of us, directly or indirectly, have contributed to society’s ills, as well meaning or unaware as we may be.

We realize this anew in this production. That is largely because of the emphasis a superb Alexa Lopez, as Maria, places on her words as she tells the characters that they all killed Tony. In fact, even she did, she admits.

While brandishing the gun that killed Tony, Lopez says this in an almost ear-piercing voice.

At this point in the production, sweet, innocent Maria is unrecognizable. Throughout, Lopez credibly and powerfully embodies the character. Her Maria is at turns sweet, at others heartbreaking and even vicious. And by the end, this Maria has become some sort of feral creature.

She’s dropped to all fours. Like a tigress or mother bear protecting her young, Lopez’ Maria screams in extreme anguish. She directs her anger at  police officers, daring them to take a step toward the dead Tony.

“Stay back!!” she almost growls.

Surely, tears roll down cheeks at this point. You yearn for the sweet, playful, almost otherworldly Maria. You know, the one who, with joy and playful mischief, sweetly sings that she feels pretty.

Such are the contrasts in Broadway Palm’s production. It runs through Dec. 1 at the Lauderhill Performing Arts Center. In this first-rate production, it’s almost as though the happy sides of life want to shine. But, dark, stark reality pushes them away.

Strong juxtaposition occurs as grim realism and a shimmering, sweet, almost lyrical dreaminess occur side by side. For instance, we hear a foreboding, danger-tinged song, during which a menacing Bernardo sings that a fight is rapidly approaching. At the same time, we see and hear a dreamy Tony singing how his romance with Maria “all began tonight.” Such a contrast reinforces not just the wide gulf, but wild hatred between the warring gangs.

Speaking of the forbidden love affair, the famous balcony scene plays out against the backdrop of a glittering, starry night sky. It’s a beautiful, peaceful sight to behold as love between members of two bitter rivals has, for the moment, squashed division.

Touching chemistry exists between Lopez’ Maria and Jacob Tarconish’s Tony. The couple hold each other’s hands. Maria places her hand on her newly beloved’s heart. They talk gently, lovingly to each other. In fact, they make us wonder why we can’t all at least talk civilly to one another in 2019. Later in Act I, this same pair will lovingly sing the tender ‘One Hand, One Heart.”

As scenes between this couple unfold, you marvel at Sondheim’s genius. This incomparable musical theater legend has proven unafraid to tackle dark, challenging, controversial topics. But as he proves in West Side Story, Sondheim is equally adept at writing touching lyrics.

Is there any string of lyrics more beautiful and telling than, “I saw you and the world went away?”

But, the lyrics, “Gee Officer Krupke, Krup you!” might cause eyes to roll.

However, these lyrics deftly reinforce the unsophisticated nature of the “juvenile delinquents” who sing them. And in this production, the actors do so with the right amount of sarcasm. Moreover, the song “Gee Officer Krupke” serves as biting satire on how society and its institutions have often failed youth. Consequently, they might mingle with the wrong crowd. Sometimes, tragedy results, such as in West Side Story (and its source material, Shakespeare’s Romeo & Juliet).

Little has changed since Shakespeare’s days and during the west side of New York in the 1950’s. Of course, today, many have contributed, again, either directly or indirectly, knowingly or not, to today’s moral-eroding, divisive society. It’s one in which the site of police lights and the sound of sirens at the scene of brutal fights and dead, tragically young bodies is sadly commonplace.

And so, while we watch the senseless fighting and division between the Jets and Sharks, we’re liable to shake our heads. Also, an uneasy feeling probably pervades our beings.

Chances are, we echo the words of Doc. Peter Librach portrays him as someone thoroughly disgusted and weary of divisiveness.

Of course, the gang members, played with a tough demeanor by talented actors, cannot offer an answer. For that matter, the musical’s creators cannot, either.

What they do is describe reality, however, grim, as vividly as the more dreamy, non-realistic scenes.

And in this production, tension between the Puerto Rican Sharks and the New York-bred Jets is thick and palpable. The competing gang members get into each other’s faces. An aura of menace surrounds them and fills the air.

In particular, Pasqualino Beltempo stands tall and proud, dripping arrogance and cockiness as Shark leader, Bernardo. He can be brash and mocking just a as he can convey a quietly threatening demeanor.

Meanwhile, a hyper Rhett Warner as Jet leader, Riff, conveys just as much fierce pride and drive to own the territory.

A much calmer, fresh-faced Tarconish offers a generally dashing, dreamy Tony. However, the actor is too understated as he sings “Something’s Coming.” I wanted to get the sense that an excited Tony sense that he could actually “see” what’s coming.

On the other hand, Tarconish succeeds while singing “Maria” with wonder and excitement.

Generally, the actors, with their mostly expressive voices, succeed. But there are times when the robust five-piece, live orchestra drowns them out. Further, the song, “Cool” doesn’t quite achieve the calm, yet warning tone that it should.

Of course, in this show, dance plays a major role in the storytelling. In fact, throughout the story, each dance move conveys an emotion that a character is experiencing. Generally, and appropriately, the performers employ confident, swagger-filled moves, sometimes featuring fighting stances. It all reinforces their streetwise, tough, confident and confrontational personalities.

These individuals perform on scenic designer Chris Peters realistic depiction of New York’s west side during the 1950s. Structures made of brick reinforce the hard-edged nature of these characters.

The sound system sometimes doesn’t work well; we can’t quite hear the actors during moments. And why is that starry night sky in the background during the number “America?” Through the song, the Puerto Rican women mock those in their company who want to return to the island.

Despite some drawbacks, this production is altogether strong. Director Dean Sobon has created striking and touching stage pictures, paced the production well and coaxed credible performances from the actors.

A revival of West Side Story will soon open on Broadway. However, you don’t have to shell out big bucks to watch compelling theater, of which there is plenty in South Florida. Fort Myers-based Broadway Palm is producing a series of shows at the Lauderhill Performing Arts Center. It is part of the inaugural Broadway in Broward 2019-2020 season. The season has kicked off strong with a stirring, tragic West Side Story — a cautionary tale, especially today, of what can happen as a result of senseless hate.

West Side Story continues at the Lauderhill Performing Arts Center through Dec. 1. Show times are 2 p.m. Wednesday, Saturday and Sunday, as well as 8 p.m. Thursday through Saturday.  For ticket and upcoming show information, visit lpackfl.com or call (954) 777-2055.