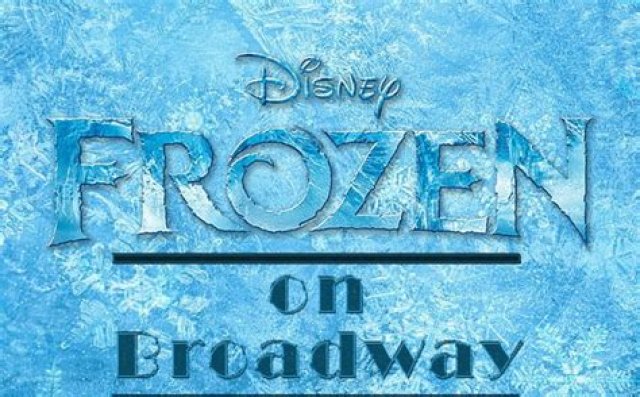 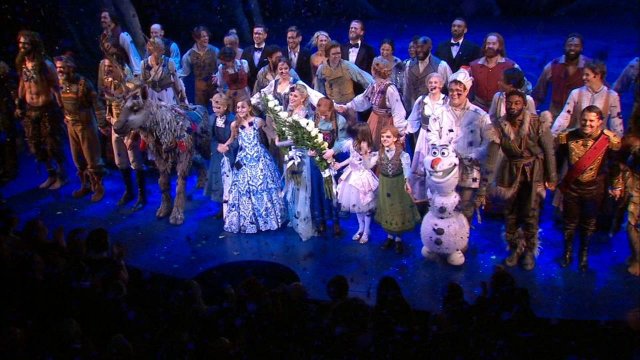 With the Broadway success of The Lion King more than 20 years ago (and still pumping millions into Disney coffers), it was no surprise that “Frozen,” the top-grossing animated film of all time, was soon going to join its jungle-inspired predecessor.

In early November,  The Lion King was still taking home a lion’s share of Disney’s Broadway revenue. It was nearly matched by two other successful shows based on animated classics: Aladdin and Anastasia, one Disney and the other not. Enter the world of Frozen.

The recently opened Frozen must still prove its will to survive in the treacherous Broadway arena. Despite some critical pans, Frozen has a strong enough pre-sale to guarantee many weeks on Broadway’s turf. Thanks are due to all the little girls who can’t get enough of the tale of Elsa and Anna, two Scandinavian sisters who yearn to be close despite mysterious magic. Separating them is Elsa’s powerful abilities that we learn almost killed Anna when they were children.

A storm-tossed journey aboard ship for the parents causes the girls to become orphaned early in the story. However, the two are seemingly reunited years later on Elsa’s coronation day. Anna, ecstatic that she can see her older sister again, is so swept away by the festivities that she gives her heart to the first handsome man who shows interest in her. That would be Hans of the Southern Isles (John Riddle), who at first seems likable and sincere.

Unfortunately, he has an evil motive for entrancing the gullible Anna. The details aren’t revealed until the end of this somewhat-complex musical tale.

(In the performance seen by this reviewer, Elsa was replaced by an understudy, Alyssa Fox. She did a terrific job throughout, even conquering the show’s formidable anthem, “Let It Go.” Anna (Patti Murin) did a wonderful job of playing the upbeat younger sister who longs only for Elsa’s attention).

Coronation day ends in disaster, however, when Elsa’s powers are inadvertently unleashed. She flees to the mountains, but not before the entire kingdom is plunged into a season of endless winter. Visually, the transformation from summer to winter is stunning. As the show begins, the residents of Arendelle are singing a tribute to the fleeting summer, to the song, “Let the Sun Shine On.” They dance joyfully, twirling colorful ribbons around a maypole. However, once Elsa places her “spell” on the kingdom, the setting (created by special effects designer Jeremy Chernick) quickly turns frigid.

The panicked Anna goes off to find her sister, leaving Hans in charge of the kingdom.

Along the way, Anna meets an intrepid ice vendor, Kristoff (Jalani Alladin) and his reindeer sidekick, Sven (Andrew Pirozzi, in a performance that deserves special mention). Although Pirozzi is never seen onstage except in a reindeer suit, he adds a tremendous amount of Disney flair to the story. Ditto for Greg Hildreath, the puppet master who controls the warm-hearted snowman, Olaf. Together, they create many memorable, magical touches for which Disney musicals are known.

Adults may not be bowled over by the appearance of characters such as Sven and Olaf, but they aren’t Disney’s desired audience. During a recent performance, dozens of little girls – many of them dressed in ice-blue princess gowns – were clamoring to purchase stuffed animals resembling Olaf and Sven at the merchandise booth.

In fact, this show provides hawkers who go up and down the aisles prior to the performance carrying boxes filled with the fluffy animals. It’s not even necessary for kids to drag their parents and grandparents out of their seats to claim one of the desired toys (at $45 each).

It must be said that this Frozen basically re-enacts the events told in the film. For those wanting more than a rehash of the movie, this effort rates low on imagination. The book is by Jennifer Lee, with music and lyrics by Kristen Anderson-Lopez and Robert Lopez. The dozen new songs fit nicely into the show’s storyline. However, none of them can match the power of the Act One finale, “Let It Go.”

A notable departure from the film is a scene played on a treacherous (and snowy) wooden bridge. Anna must cross the bridge to reach Elsa. When Kristoff offers to go first, he nearly plunges to his death. Anna impresses him with her gutsy rescue attempt, and he begins to see her in a new light (hint, hint).

Meanwhile, Elsa relishes the freedom of unleashing the extent of her powers. With amazing dexterity, she entombs herself in a castle made of ice. (She does this while singing “Let It Go.”) At one point, her regal yet unimaginative coronation dress “disappears,” to be replaced by the sparkling blue gown for which Elsa is known.

Once Anna arrives with the news about Arendelle’s deep freeze, Elsa agrees to return to her kingdom. She still doesn’t know how she will reverse the spell. But it is the power of sisterly love that triumphs over all. It’s a nice switch from the lover’s kiss – the go-to “antidote” for many prior Disney tales.

And despite its limitations, Frozen is going to cheer little princesses for months (or years) to come. They’ll still be talking about the “disappearing dress” and other technological wonders years from now, not to mention the funny antics of Olaf and Sven.

Disney’s Frozen continues on an open-ended Broadway run at the St. James Theatre, 246 W. 44th St. Tickets are available at http://FrozenTheMusical.com or by calling 866-870-2717.

Anne Siegel is a member of the American Theatre Critics Association. She writes from Milwaukee, WI.