String Madness and Accord 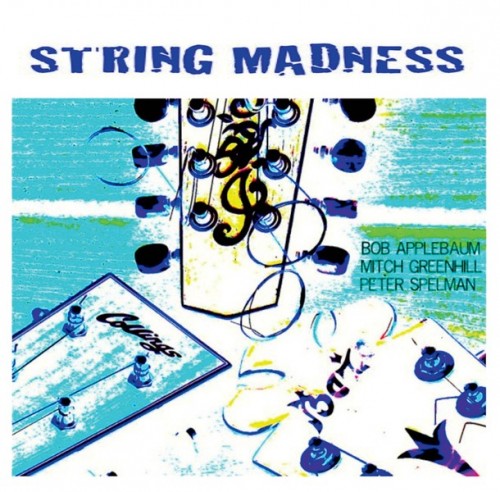 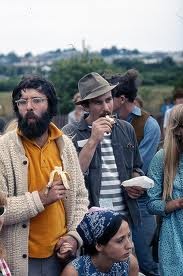 String Madness member, Mitch Greenhill standing next to Eric Von Schmidt and behind Maria Muldaur at the 1965 Newport Folk Festival. 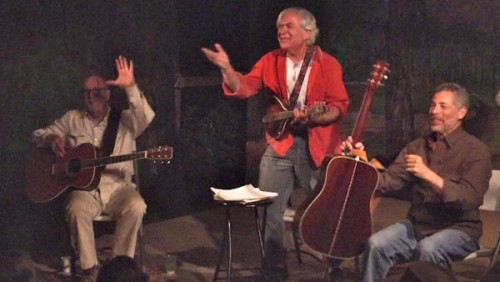 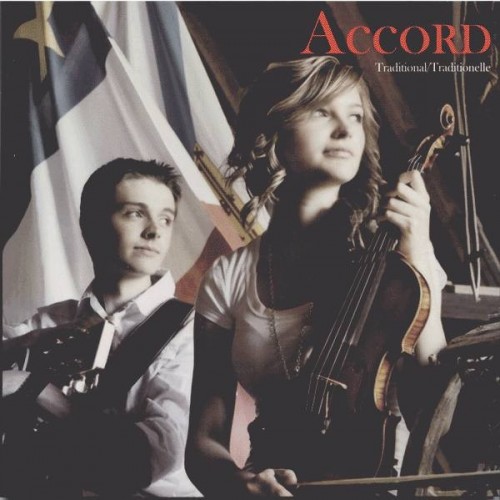 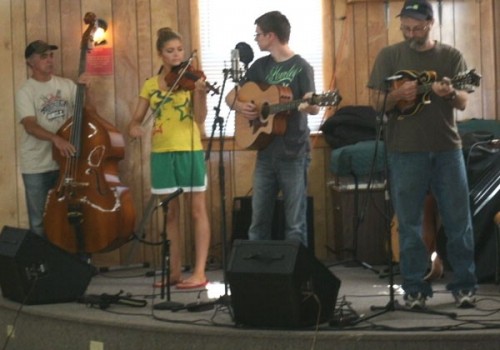 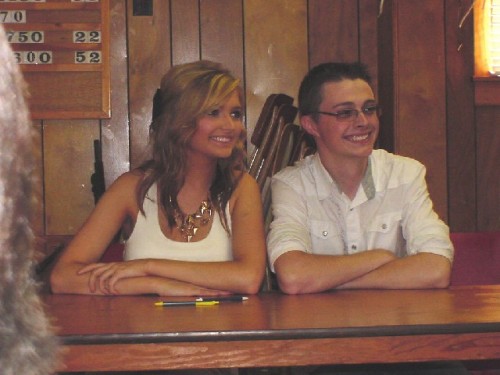 Lisa and Kyle, at the Royal Canadian Legion Hall in Weymouth, Nova Scotia meet and greet fans at the door on the night of the cd release concert. It was a great turnout.

I first came to the quirky world of folk music as a result of exposure to camp songs and through singing with campers and fellow counselors in the dining halls and around the campfires. While not all songs were folk songs, many of them were, or were parodies or paraphrases of traditional songs. My pursuit of fresh material coupled with an interest in traditional ballads inspired later on by one or two of my BU literature courses seduced me further away from mainstream pop of the latter ‘50s. Most, not all, but most pop seemed to me at the time to be banal and not very relevant to my experience or the events of the day. Odd that the songs of previous decades, sometimes centuries, could better express much of what I was thinking and feeling then could the contemporary material.

So, you can correctly deduce that my interest was far more leveraged to the messages and meanings of the lyrics, and beyond that the literary conventions and artistry.

Naïve as I was, I assumed that everyone involved in the scene came from the same compass point. I tell you this to point out, confess, my critics might say, that in many ways I began quite ill equipped to address or understand much about the musical aspect of folk music beyond an appreciation of the voice and the composition.

Much of the common vocabulary about musical forms and patterns, scales, chords and measures remains today, half a century later, as mysterious to me as ever they were. What has changed for me in regard to the music is, that having heard so much, I have learned to pay attention to how the music affects me emotionally and physically and how to feel what I can only describe as the texture, the punctuation and the flow of it. I am oblivious to much, aye, most of the mechanics behind making it do what it does, and most instrumentalists are magicians in my view.

With all that as a given, you may well understand why I generally avoid reviewing cd’s that are void of singing, and it is with some trepidation that I approach these two releases, and would with even greater hesitation were it not that each of them delights, astounds and begs me to listen to them repeatedly and often.

Of the three members of this relatively new and amazing ensemble, I have known only Mitch Greenhill beforehand. I owe him a debt for some advice he gave me over 50 years ago as we stood together against the back wall of the Unicorn coffeehouse on Boylston Street, across from what is now the Prudential Center here in Boston. I forget who was on stage at the time, only that it was a Hoot night, and neither I nor Mitch thought much of the performer on stage.

He asked me at that point why all our reviews were so positive and why we (Broadside) never really criticized many of the performances that deserved criticism. I still can see the sparkle in his eyes, the mustache he was sporting and the ever-present flat brimmed hat he wore. I responded that we thought our task more to support the community than to cast stones at it. He took a moment to reflect upon this before asking if I did not think we might better serve the community by educating our readership about what deserved appreciation and what did not.

His question and its ramifications changed our policy slowly at first and eventually more dramatically. (I know, I do not criticize much nowadays though my answer now is that there is too much good music that goes unrecognized and I would rather use my time and platform to bring it to your attention.)

Mitch’s decision to move out of the Boston scene left a gap here, as even then he was a serious student of the guitar and musical forms. Over the years I would catch a word or two about him, note a credit naming him on one LP or another, and eventually note significant credits on films such as The Long Riders. His varied accomplishments are much too numerous to list here.

When I heard that he was performing with a new group which was releasing their first cd, I requested a copy.

String Madness is an ensemble featuring both Mitch and Peter Spelman on guitar with Bob Applebaum on mandolin.

Bob may be best known for his accompaniment on releases by Bela Fleck, Richard Greene and Mason Williams or for some his participation in the Mesto ensemble, though he also has a body of work and a history of musical accomplishment (once again) far too extensive to recap here

Peter Spelman developed his guitar playing in the Village before moving west to Madison (Madison?) and then California. As a singer-songwriter settled in the Bay area, he found himself on-stage with an eclectic set of peers including Boz Scaggs, Stan Getz, Bonnie Raitt, George Thorogood, Dave Brubeck, Albert King, Kenny Rankin, Emmylou Harris, and Van Morrison.

Mitch tells me that, “We first got together as kind of a breakout jam session from a bigger musical gathering… spent a couple years in my living room, exploring odd musical paths that all of us appreciated. At that time, we had little thought to perform, but eventually the music found its way to various stages, including a series of guitar store-cum-concert halls in southern California.”

Continuing he said, “We share a dedication to instrumental improvisation -- sometimes it can get pretty far afield -- within our common history, coming up in the folk music culture of the 1960's.”

Together, their six legs straddle a dozen or more source genres from the US plains. mountains and deltas to and the British Isles, further afield to Eastern Europe and the Middle East their improvisations weave a wide ranging tapestry with a sometimes brash, sometimes gossamer texture that is ever beguiling. Over and over recognizable fragments of motif and melody appear and fade into the background.

Peter Spelman is credited with almost half of the compositions, while Mitch offers two of his own and the three of them collaborated on an arrangement of a Bach piece dubbed here “Bach Diddley.”

Two decidedly jazz pieces, “Nuages” by Django Rheinhardt and “All Blues” by Miles Davis demonstrate the continuity between traditional string band music and both period and modern forms of jazz.

Their take on the traditional Poor Wayfaring Stranger evokes every nuance and association we might expect from a solid vocal and perhaps more.

And so to honor Mitch more than for any other reason, I will end with two criticisms. There should have been more tracks on this release, 11 being not nearly enough and the notes (written, not musical) are scandalously sparse. We want more.

Kyle Doucette and his younger sister, Lisa, comprise a musical duo based in South Western Nova Scotia, County of Digby, and Municipality of Clare. This is one of the Acadien (pronounced Aca-jun) settlements of the Canadian Maritime provinces. The area is rich in the musical traditions of French colonialism and the cultural memes resulting from the Great Expulsion of the mid 18th century, and the return of some of the expelled toward the latter part of the century. Long economically depressed, yet well within radio range of Boston’s powerful AM stations, the inhabitants of this area have codified a synthesis of pop country, bluegrass and French fiddle music that is decidedly their own. So it is no surprise to find on this all instrumental release, such diverse choices as St. Anne’s Reel, Golden Slippers, Old Joe Clark and Down Yonder.

I have long known and appreciated the playing of Paul Deveau who accompanies the duo on mandolin for many of the tracks. Bass players, Simon Robicheau and Marcel Weaver alternate on various cuts as well though we are given no indication of who plays on which track.

Lisa, classically trained on violin, produces a rich, smooth never faltering tone which nonetheless avoids becoming sterile or too formal and Kyle, versatile on guitar, banjo, mandolin and bass is not only technically superb, but spontaneous and emotionally expressive.

In a live appearance by themselves, I found them to be a bit less adventurous, but in other performances where Deveau and Weaver joined them on stage, they loosened up considerably and let their hair down.

At their cd release performance at a fraternal club in Weymouth, NS, I was impressed with Kyles vocals. He has a rich voice with a tonality I found reminiscent of early Hank Snow or Eddie Arnold.I would have welcomed some vocals here but he promises some to come in the future.

While I understand that this release of a dozen tunes is a labor of love rather than a strategic step on a career trajectory, it is charming, a delight to experience and I have become more than fond of it. If this raises interest for you, you can request info from Kyle Doucette. KyleDoucette4@gmail.com