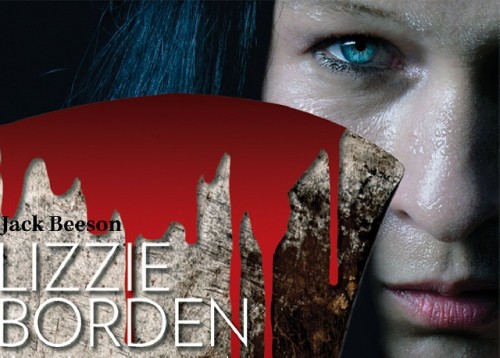 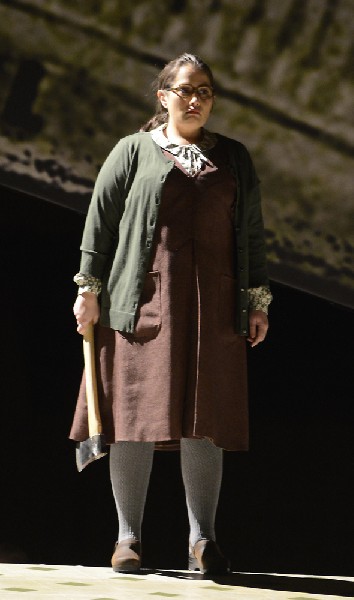 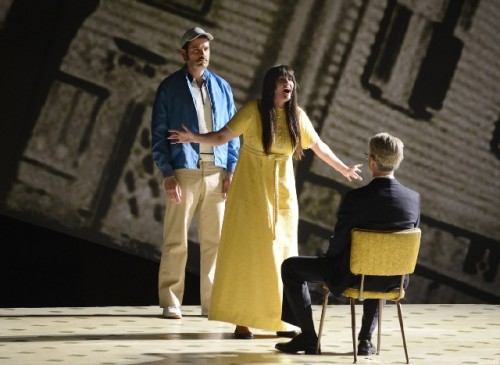 David McFerrin as Captain Jason Macfarlane, Chelsea Basler as Margret Borden and, his back to the audience, Daniel Mobbs as Andrew Borden 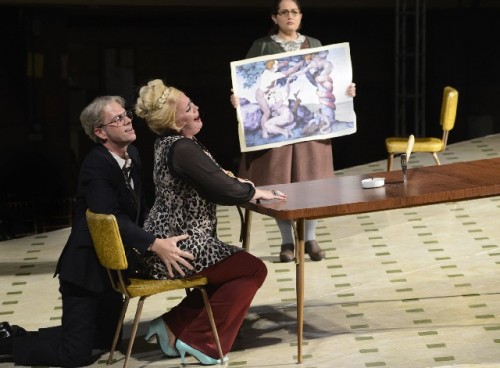 Daniel Mobbs as Andrew Bordern, Caroline Worra as Abigail, his new wife, and in the background, Heather Johnson as Lizzie

In Boston, we like to think of ourselves as John Winthrop’s City on a Hill, as the Athens of America, the Hub of the Universe, the home of Transcendentalism, abolitionism, feminism and other progressive causes – all good things. However, the city and region is just as much remembered for less savory events in its history: the Salem witch hysteria, the Boston Strangler, the violence surrounding school busing, Whitey Bulger and, the mother of them all, Lizzie Borden and her infamous axe.

I don’t know if school children today still sing, “Lizzie Borden took an axe/And gave her mother forty whacks./When she saw what she had done/She gave her father forty-one,” but the 1892 murder in Fall River still loomed large enough in the imagination in 1965, when Jack Beeson wrote his most enduring opera that he was able to treat it as the subject of a myth - a self-conscious New England Electra.

And in the reduced chamber version the Boston Lyric Opera commissioned and premiered here this weekend, the story’s mythic elements are obvious: a repressed daughter, mourning still for her dead mother, kills her domineering father and his young, frivolous, second wife. Mourning may become Electra, but revenge fulfills her.

Beeson (1921-2010), who taught at Columbia, was a man of his time intellectually. The work he created, its plot suggested by German scholar Richard Plant and realized in verse by Kenward Elmslie, is suffused with Freudianism, whose theory of repression is illustrated by the events depicted with textbook precision. A provincial New England version of the classic Victorian spinster, Lizzie seethes with anger mingled with desire for her sister’s betrothed and for her authoritarian father. Beeson and Elmslie were aiming for timeless archetypes but their period adherence to what is now considered outmoded psychological theory limits the universality of the work to its time and place: mid-20th century New York as viewed through the backward lens of a late 19th century New England seaport.

That doesn’t mean that it has no interest or relevance to us today. The story they set is relentless in its drive toward resolution, and their treatment of it makes us sit on the edge of our seat watching the inevitable work itself out. We might see the psychological theory as dated, but we read about the same kind of family dysfunction everyday in the newspapers (or wherever we get our news), however we prefer to explain it.

Not wanting to produce a police procedural, Beeson and Elmslie skipped over the only documented evidence of the Borden case: Lizzie’s trial, in which she was found innocent of the horrific crime. Instead they focus on the events leading up to the murders, which is pure speculation. They present the murders as being unambiguously committed by their protagonist, although they place them off stage, favoring the psychological over the sensational. The action of the opera occurs around the kitchen table and in Lizzie’s increasingly demented mind.

The BLO engaged the controversial director Christopher Alden to stage the work. Although his work was telling in its details – for instance, in the first scene Lizzie plunges an axe in the table that dominates the set, where it remains until she retrieves it for use - Alden made the crucial mistake of updating the events to mid-century, the time in which the work was composed rather than when they occurred. I have no general objection to resetting or updating works; sometimes such changes can produce insights long since lost in the originals - for instance, the Met’s recent updating of “Rigoletto” to Rat Pack-era Las Vegas, with the Duke as the Chairman of the Board (more or less) gave a Renaissance court’s amorality and corruption contemporary resonance.

Alden’s mid-century setting allowed the set and costume designers to produce images more immediately readable than an impenetrable Victoriana – for instance, the tackiness of Abigail, the stepmother, with her bleached blond hair, tight pants and turquoise heels needed no translation.

But what the production gained visually it lost musically.

Although Beeson was a modernist – his dissonant, noir-ish interludes suggest Alfred Hitchcock’s favorite composer, Bernard Herrmann - he infused his opera with Victorian references from the church hymns that open the work to the florid Victorian parlor song Abigail sings at the harmonium to the famous rhyme about Lizzie with an axe that comes near the end. The opera’s musical underpinning thus worked against the production’s visuals, which proved discordant.

Although Alden’s updating was unfortunate it did not prove destructive of the work’s overall drama. Reduced from a full evening three-act work to a 90-minute single act, the BLO version was fleet and taut, and it proceeded relentlessly to its conclusion. Much of the success was due to the musical team assembled.

David Angus conducted the small orchestra with precision and passion.

The cast was uniformly excellent. As Lizzie, mezzo-soprano Heather Johnson seethed with passion – her degeneration from repression into madness dominated the second half of the work. Although she sang with beauty of tone, Johnson paid close attention to the text, making it dramatically riveting. As Abigail, soprano Caroline Worra showed a fine flair for subtle comedy, engaging the audience’s sympathy in her position as the former hired help moving into the boss’s bedroom while setting herself up for her fate with her cruelty toward her stepdaughters. Bass-baritone Daniel Mobbs was perfect as Andrew Borden, the capitalist father, whose Puritanism melts into lust with his new bride. As Margret, the younger daughter, soprano Chelsea Basler brought personality to what might have been a thankless role. Her long yellow gown and long dark hair recalled the tragic Karen Carpenter. As her beloved sea captain Jason Macfarlane, who takes her away to a life far from her father’s coldness, baritone David McFerrin was appropriately sexy, appraising Margret with ill-disguised lust. In the small role of the pastor, tenor Omar Najmy was fine. A special note of praise to the children’s choir, which ended the work with a discordant chorus of demented laughter, recalling the ending of Alban Berg’s “Wozzeck.”

The BLO announced that it is bringing “Lizzie Borden” to Tanglewood next summer, the second year in a row that a Boston company will provide the festival with an opera. (Last year, Emmanuel Music’s concert version of John Harbison’s “The Great Gatsby” made the trip West.) With the Boston Early Music Festival’s biennial presence in Great Barrington, Boston music organizations are presenting their ambitious opera productions to a second audience. May it become a tradition.