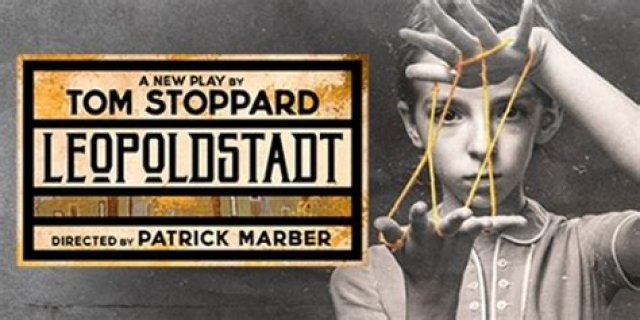 Finally, theater lovers in the US can see Tom Stoppard’s latest play Leoopoldstadt. The play opened in London in 2020, but Covid prevented it from crossing the Atlantic until now.

The opening of the play –brilliantly staged by director Patrick Marber — can seem unemotional. You might wonder if you will be able to get into this story of an extended Jewish family in Vienna from 1899 to WWII. It appears to have Stoppard’s “coolness;” he has, on occasion, been criticized (like Sondheim) for a lack of connection and emotion.

But don’t worry – you will be totally absorbed by this story; in the final scenes, set in 1938 and 1955, you will be deeply moved.

Whether this is autobiographical or only suggested by Stoppard’s family, it doesn’t really matter. What does matter is the brilliant acting and story-telling.

It is hard to fault anything in this production. The scenic design by Richard Hudson – focused mainly on the large apartment in Vienna is terrific, and the period costumes by Brigitte Reinffenstuel span the decades effortlessly. Lighting designer Neil Auston and sound designer/composer Adam Cork set the mood and time, while the projections by Isaacs Madge contribute to our understanding.

Stoppard makes us think about so many issues: continuing antisemitism, assimilation, immigration, and being “the outsider.” Many in the audience can identify in one way or another to these larger ideas. We have stories of our parents or grandparents or earlier relatives arriving in the U.S. and how they were viewed. Our families may have assimilated to varying degrees and many of us, due to gender, sexual orientation, and ethnicity feel often like an outsider.

The large cast is so good it is hard to single out individual performers. Brandon Urbanowitz is outstanding as two family members – in the early period, he is Ludwig and in the later, he is touching as the survivor, Nathan. That final scene with Urbanowitz, Jenna Augen and Arty Froushan is brilliantly performed.

The play focuses on four major years and family events.

It opens in 1899 when members of two middle-class Jewish families have gathered for a Christmas celebration. They are so assimilated into both Christian and Viennese culture that when one of the children tops the tree with a Star of David, it is treated humorously. In each family (Merz and the Jakobovicz), some members are somewhat observant of their faith, but others aren’t. One or two have converted to Christianity, and others have married outside of the faith. While the conversation includes a discussion of Zionism and Herzl, it also revolves around Austrian culture and the arts. Yet they recognize that antisemitism is prevalent. The military officer corps and many prominent social clubs do not accept Jews.

After introducing the family members – which can become confusing, we jump to 1924 – the day of a bris for a newly born son. By now, one young man has died in WWI, while another (Jacob) has lost his arm. Rosa has moved to New York City. While Austria’s defeat in the war has led to staggering inflation, the family is still doing well.

By 1938, the tide has turned. Hitler has taken over Austria, and anti-Semitism is rising, but the family remains optimistic. That is until the Gestapo came knocking with their insults and terror. A family member is forced to sign over his business to the state and all are told they must vacate the comfortably large apartment. Yet, even then, some do not want to leave their country.

The final scene is 1955 – Austria is still occupied, the opera house is about to reopen, and three family members meet. One (Nathan) survived the Holocaust, Rosa has returned from America and Leo is visiting from London.

Leo and his widowed mother got out; she married a British journalist, left in 1938 but was killed in the Blitz. This irony — that she also was killed by the Germans – while it might seem to connect him to his cousins, is just another barrier.

Leo is a totally assimilated Englishman.. He has no memories of growing up in Austria or the fateful day when the Gestapo arrived, even though he was 8. He has no connection to his family or his Jewishness. After his mother’s death, his Christian step-father remarried.

His cousins are horrified and angry at him for what they view is his obtuseness. All of those who remained in Austria either committed suicide or were killed, except for Nathan.

My only real complaint was that I sometimes got confused about the characters, even with the help of a family tree in the program. But that did not impact either the power of the play nor my enjoyment of it.

Stoppard is a brilliant playwright who always gives us something to think about after the final curtain.

Leopoldstadt is no exception.