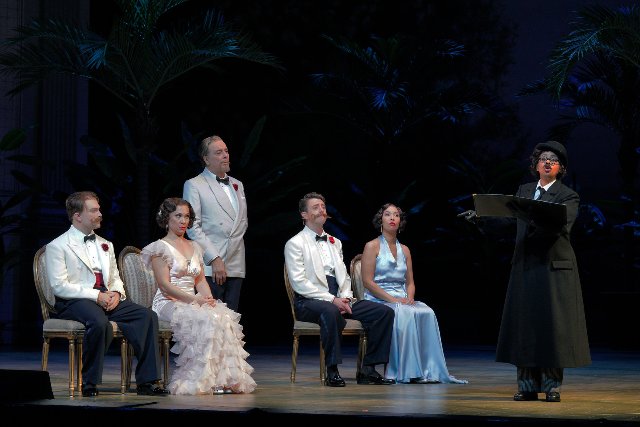 “Così Fan Tutte” was the last of three collaborations by perhaps the strongest composition team in opera history.  Composer Wolfgang Amadeus Mozart and librettist Lorenzo da Ponte had previously written “Le Nozze di Figaro” and “Don Giovanni.”  Acknowledging the significance of this unplanned trilogy, San Francisco Opera is presenting them all over a three-season period.   With a superb cast and wonderful staging, the company’s production of “Così” absolutely sparkles, making the best of the opera’s assets.

This opera was the only one that the duo produced based on original material written by da Ponte.  The good news is that as a result, the plot line is clear without the gaps and confusion that often accompanies operas compressed from other sources.  The bad news is that the authors take 3 ½ hours to tell a simple story.  The other good news is that Mozart lovers will find that a fine bargain.  The score is pure mature Mozart, yet surprisingly, it lacks signature arias that grace the other two collaborations.  And despite the current respect it receives today, it was virtually ignored for over a century.

Director Michael Cavanagh sets the action in the 1930s at a country club in the mid-Atlantic of the United States.  The time and venue changes work exceptionally well.  Erhard Rom’s framing set in Federalist style serves as backdrop for introduction to period props and decorations that work nicely – everything from a badminton court to a visual conceit of swimmers rising out of a pool.  And Constance Hoffman’s oft-changed costumery provides a panoply of color that engulfs the stage and a comic mock-country-club look.

The meaning of the title translates roughly to “all women do it.”  The “it” refers to infidelity.  Opera aficionados will realize the humorous irony of the libretto’s argument.  Da Ponte is acknowledged as one of the great womanizers in opera history – a bit of the pot calling the kettle black.

In this case, two somewhat naïve and headstrong military officers insist that their fiancées are eternally faithful, to which a provocateur, Don Alfonzo, offers a wager that he can reveal them unfaithful in less than 24 hours.  What follows is a series of silly, unrealistic, but fun-filled episodes in which the officers disguise themselves as Albanians and try to court the sisters.  The men’s pratfalls to induce sympathy include fake poisoning followed by electromagnetic treatment that leaves them thrashing and writhing on the floor.

Ben Bliss as Ferrando possesses a classic tenor voice, while John Brancy as Guglielmo is a fine lyric baritone, and the contrast works nicely apart and together.  Sisters Fiordiligi, played by Nicole Cabell, and Dorabella, played by Irene Roberts, demonstrate singing and acting skills equal to the men.  But their depictions play to similarities.  With identical wigs, makeup, and costume style, they look like sisters.  What’s more, though Cabell has glorious power in her upper range and the higher tessitura in her soprano part, the two have very similar timbres in their mid ranges, which makes their close harmonies sound like they are related.

The third dyad of principals in “Così” are the instigators.  Don Alfonzo is portrayed by the redoubtable Ferruccio Furlanetto, and he inhabits the role with great flair, seeming perfectly suited to his ‘30s wardrobe.  His vocals are largely recitatives, but, again, well suited.  The really juicy role, however, is that of Despina, his co-conspirator.   Nicole Heaston squeezes it for everything it’s worth.  Apart from being sassy and cynical as the girls’ maid who encourages deceiving the men, she plays a notary and the doctor who administers the anti-poison treatment, in disguise.  Oh, and like the other principals, she has a fine voice, a coloratura soprano.

Given the length of the opera and its nature as a domestic comedy, the action may seem to move slowly.  In the first act, the unhurried story is mitigated by the initial high jinks and a number of bright ensembles.  The tone changes in the second act which is dominated by reflective stand-and-deliver arias and other fairly static set pieces that don’t move the narrative forward.  Two of the solos, however are the best candidates to appear in compilation albums, and they are both beautifully delivered.  Bliss gives a fine tenor rendering of ‘Un’aura amorosa,’ (A loving aura), while Cabell follows with the delicate apologia ‘Per pietà, ben mio’ (In the name of pity).  In the end, all is well in the world of romance.