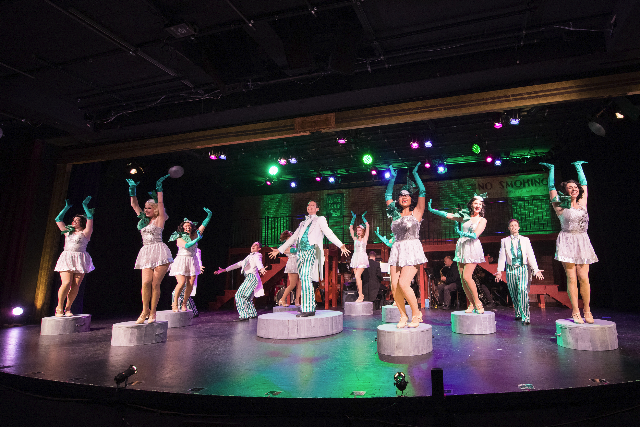 Dancing to “We’re in the Money.” All photos by Ben Krantz Studio. 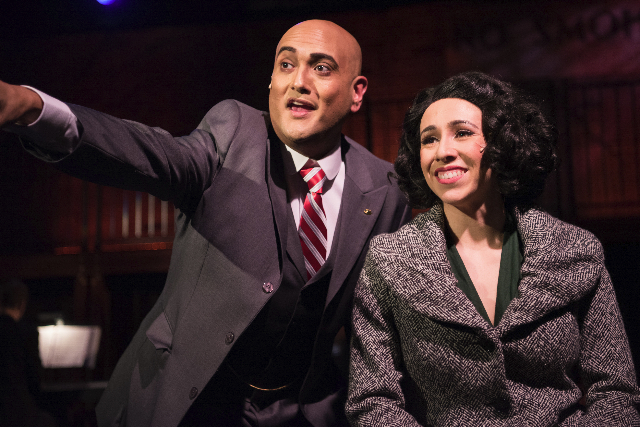 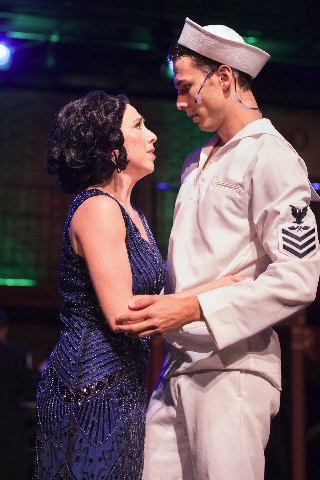 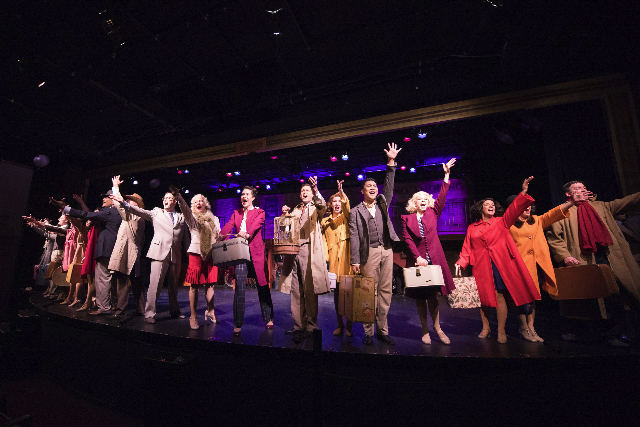 “Hear the beat of dancing feet, It’s the song I love the melody of, Forty-Second Street,” lyrics from the theme song “42nd Street.”

42nd Street is the quintessential musical about making a musical, with thrilling dance numbers, fabulous music, quirky characters, and all of the back stage shenanigans that you could hope for. Bay Area Musicals offers a trim version of this classic, which satisfies a willing audience but has room for improvement.

The story possesses every cliché in the genre, but that’s what makes it warm and familiar. The following paragraph reveals the triteness of the script, and includes spoilers for the several people in the world interested in this show who don’t know the plot.

Peggy Sawyer is a want-to-be chorine who misses auditions for Pretty Lady, a musical rehearsing for out-of-town try outs before shifting to Broadway. But by being in the right place at the right time, the imperious director Julian Marsh who wants an extra girl for insurance, adds her to the line. Dorothy Brock is an over-the-hill stage star who is cast in the lead of the show only because her yokel-from-the-provinces sugar daddy is bankrolling it. As a result of Peggy’s being out of position, Dorothy breaks her leg causing Peggy to be fired. Lacking a star, Julian cancels the show. Though this was to be Peggy’s first show, the chorines rally around her to be Dorothy’s replacement, and Julian agrees to risk everything on her with 36 hours until opening (Are you kidding me?!). Self-indulgent Dorothy turns gracious and wishes Peggy well. Through it all, Peggy’s romantic relationship with Billy Lawlor grows. Pretty Lady opens successfully.

Director Daren Carollo and choreographer Matthew McCoy’s production is energetic. Dancing dominates the stage from end to end, especially chorus tap routines. Dance execution appeals, with the leads Nikita Burshteyn as Billy Lawlor and Samantha Rose as Peggy Sawyer the standouts. The ever smiling chorus line gives a good showing. It is remarkable that with Singin’ in the Rain running at the same time there are enough competent tappers in the Bay Area to fill both shows.

After a mostly uninflected Act 1, a number that stands out from the rest is “We’re in the Money,” which is part of the Act 1 climax comprised of a strong musical sequence also including the beautiful “I Only Have Eyes For You,” and “42nd Street.” The dance commences with several girls in tattered Depression rags finding a dime on the street, and turns into a bright, full stage dance with girls tapping on and around drums with coin motifs. Act 2 is more lively and includes another batch of highly memorable songs – especially “Lullaby of Broadway,” “About a Quarter to Nine,” and “Shuffle off to Buffalo.”

BAM is a non-equity company, and expectations should be shaped accordingly. Acting and singing are uneven with occasional bright spots, particularly Burshteyn who shows charisma and flair. DC Scarpelli is Julian Marsh and Laurie Strawn is the manipulative, self-servicing Dorothy Brock. Both are competent, experienced actors, but they aren’t as strong in the singing department. In addition, Ms. Strawn is not the proper age or body type for the role of a Broadway dancer at the end of her career.

The live orchestra of six players generally provides a reasonably full sound but was out of tune in parts and sometimes unbalanced as a result of the trombone facing the audience and its support part overpowering the melody lines. As with many musicals, great demands are placed on the costume designer, and Brooke Jennings rises to the task.  Overall, the audience appears to forgive the weaknesses, and the show does have a following.

There are several distinctions that mark this wonderful material. The 1980 stage show is based on the 1933 movie of the same name, which was the seminal film on this topic. As hard as it is to believe, a filmed musical had never been successfully transferred to the stage. This one succeeded wildly with critics, winning the Tony for Best Musical and more. Audiences agreed, and the play ran on Broadway for nine years. It is also distinguished as an early jukebox stage musical, incorporating additional songs by the same composers that were not part of the original source movie. Finally, of note, the stage version’s legendary choreographer, Gower Champion, died on the day of the opening, but his passing was kept secret until an announcement at the end of the performance.

42nd Street with music by Harry Warren, lyrics by Al Dubin, and book by Michael Stewart and Mark Bramble is produced by Bay Area Musicals and plays at the Alcazar Theatre, 650 Geary Street, San Francisco, CA through December10, 2017.