A World Premiere by Theatre Lab in Florida 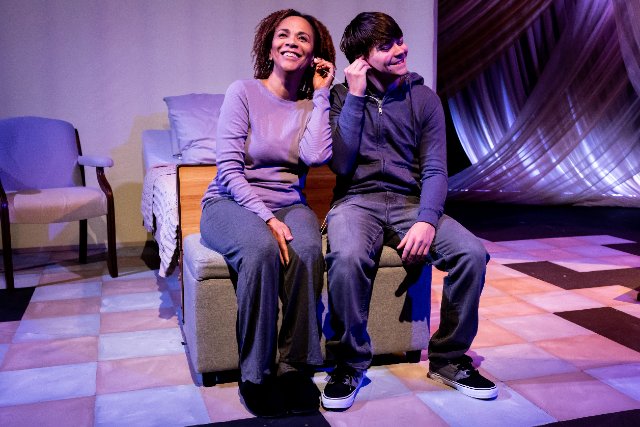 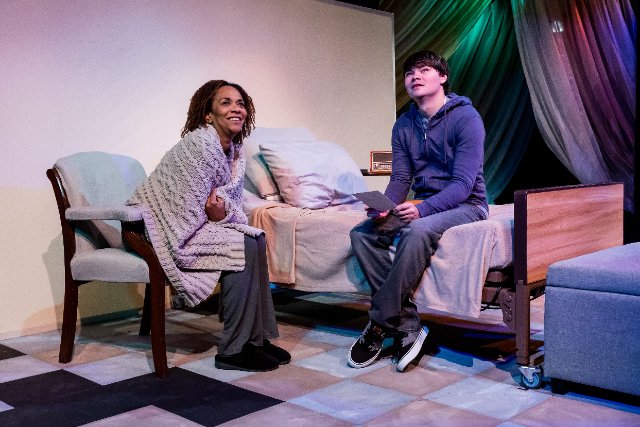 During a time when censorship is happening too often, it is heartening to discover life-affirming works of art that celebrate the power of stories, connection, and knowledge.

One of the latest examples of such a work is the heartbreaking, heartwarming, and funny new play, Dorothy’s Dictionary, by E.M. Lewis.

This two-character, roughly 70-minute piece without intermission is a relatable play that might call to mind Thornton Wilder’s Our Town. Indeed, like that classic, Lewis’s play, without preaching, encourages us to live fully in each moment and appreciate life’s sometimes overlooked pleasures. In addition, Dorothy’s Dictionary reminds us anew that positivity, human connection, humor, and fiction can help us through hard times.

Southeast Florida theater fans have the chance to be among the first to experience Dorothy’s Dictionary in production. That is because Theatre Lab, the professional resident company of Florida Atlantic University dedicated to producing new work, is giving Dorothy’s Dictionary a moving and humorous world premiere production through Dec. 11. The venue is Theatre Lab’s intimate 99-seat Heckscher theater space.

Actually, Southeast Florida live theater audiences may have experienced the power of Dorothy’s Dictionary during a reading of the play by Palm Beach Dramaworks, about 25 miles north of Theatre Lab. That reading, like Theatre Lab’s production, starred area actors Elijah Moseley and Karen Stephens.

Judging from a recent performance, the pair are offering believable, nuanced portrayals. And Matt Stabile, Theatre Lab’s Producing Artistic Director, directs the production with care and skill. Indeed, the proceedings unfold so fluidly, the direction seems invisible. Stabile moves the actors around the set and gives them business to do while they speak. This enhances the performances’ realistic quality. Stabile and cast members also honor the script's many moments of silence; this play's power rests just as much in what the characters cannot bring themselves to say, as in spoken words.

The play takes place during the present time at a hospital in an unspecified city.

Before the action begins, authorities arrested 15-year-old Zan for fighting at his high school. As a penalty, a judge sentenced him to community service. Specifically, he must spend time with and help the titular character, who apparently knows the judge. She is a librarian hospitalized with a terminal illness. Zan must do what Dorothy asks of him, and she requests that he read to her.

Dorothy’s hospital room is one of the last places that Zan wishes to be. Also, he is hardly thrilled at the prospect of reading to this woman, whom he does not know. And Dorothy is not exactly ecstatic about spending time with the brooding teenager in her hospital room. But, over time, these two contrasting individuals come to not only respect, but appreciate each other. And, by the end, they seem inseparable.

Chances are, we have witnessed this kind of tale before. The story of two people with seemingly nothing in common who, over time, develop a strong bond with each other played out in, for instance, Driving Miss Daisy. The playwright, Alfred Uhry, adapted his play into a 1989 Academy Award-winning film starring Dan Aykroyd, Morgan Freeman, and Jessica Tandy.

Although Dorothy’s Dictionary is not groundbreaking, this type of story is easier to appreciate these days, with a pandemic not quite past us. Certainly, over the course of roughly two years, many of us became starved for human connection. Of course, such a thing was dangerous to our health. Still, the chance to connect with fellow human beings remained necessary for our mental well-being. Undoubtedly, Zoom proved to be a lifesaver.

Speaking of technology, it is just one subject in which Dorothy and Zan differ. Like many teenagers, Zan cannot seem to take his eyes off his cellphone. This fact annoys Dorothy. So, she encourages the young man to look up the meaning of words not online, but in a print dictionary.

“When you look up a word on your phone, the definition of that word comes up, and you’re done,” she tells Zan. “But you lose all the ancillary benefits.”

Of course, Dorothy then tells the teen to look that word up – in a physical dictionary, not online.

Looking a word up online is “like flying instead of taking the train. It’s efficient. But there’s so much that you miss.”

The differences between these characters will leave you nodding your head and laughing. Chances are, these generational differences are familiar to you from your own life experiences.

Some of the play’s lines are irresistible. For instance, how can you not laugh after Zan mildly scolds Dorothy for giving strangers his phone number. “Now I’ve got five little old ladies texting me in complete sentences,” he exclaims.

Certainly, the playwright uses humor to make her play watchable. Without it, Dorothy’s Dictionary would be unbearably depressing. Consider, for instance, when Zan is hesitant to enter the room because he hears a heart monitor. Dorothy is hooked up to it toward the play’s end.

Of course, he asks her what that means – and, you guessed it, Dorothy tells him to look it up in her print dictionary.

Such quotes as the aforementioned also help to depict Dorothy as a positive person who looks at the bright side of situations. Naturally, with such qualities, Dorothy wins Zan – and us – over.

“I like being with you,” he tells her. “You’re the first person in my whole life who, like, listens to me. You listen to me. Not just when I’m reading to you.”

Dorothy and Zan are vivid characters who are likable. These are two reasons why we do not want them to leave us when the play ends. We learn facts about these characters that help to flesh them out. For instance, Zan’s mother died when he was little. That, and the fact that his father ignores him, help explain why the lad is a lost soul in need of direction and nurturing.

While we learn things about Dorothy, there is room in this play to flesh her out even more. For instance, is she married? Was she ever? Do any friends or family members visit her in the hospital? What is her favorite book/author and why?

While we desire to know more about the titular character, Dorothy’s Dictionary is generally a strong play. In particular, it is an eloquent and compelling piece of writing that reminds us that we have more in common with most people than we think.  Undoubtedly, this is a welcome message during the divisive times during which we live.

One of the joys of watching this play, in addition to the humor and literary references, is observing as, little by little, Dorothy and Zan’s relationship grows from distant and cold to warm and close.

Under Stabile’s sensitive and detailed direction, the change occurs slowly, almost imperceptibly, as it does in Driving Miss Daisy between the title character and her chauffeur, Hoke.

When we first meet Zan, Moseley convincingly makes him a sulking, bitter, eye-rolling, and tense teenager clad in a hoodie. He wears it over his head and stuffs his hands in his pockets, as though to shield himself from the world. Sarcasm escapes his voice, which is sharp and bitter-sounding.

But as the production progresses, Moseley’s Zan progressively relaxes and softens. By the end, he moves quickly and enthusiastically toward Dorothy like a kid rushing toward his hero. Toward the end, warmth and enthusiasm escape his voice.

While Moseley is a college graduate, he easily passes for a 15-year-old in voice and appearance. Also, the actor imbues Zan with enough of an impulsive streak to make us believe he is capable of the violence he displayed offstage before the play begins.

Meanwhile, Stephens believably plays Dorothy as an emotionally-strong woman whose reactions to Zan’s comments combine sarcasm and amusement. Clearly, this woman is no pushover. But while Stephens imbues Dorothy with toughness, the performer also lends her character a contagious zest for life. Listen to her as she dreamily talks about some of her favorite things. As is true with Moseley’s Zan, Stephens’ Dorothy grows progressively more relaxed as the production progresses.

One quality that could be more prominent in Stephens’ performance is a sense of anxiety or vulnerability after Dorothy reveals her diagnosis and prognosis. True, the character is emotionally tough. Still, you might expect her to shed a tear or for her voice to crack when she admits to Zan that she is scared. To her credit, Stephens’ Dorothy says, “I’m only 45 years old” in a disbelieving voice after she reveals that hospice volunteers started visiting her.

The actors perform on scenic designer Michael McClain’s impressive symbolic set. The main set piece is a backdrop. If you look at it closely, it resembles a thick, oversized opened book resting diagonally. If you were to close this “book,” it would sandwich a realistic looking bed and chair that serve as set pieces making up Dorothy’s hospital room. Undoubtedly, for a play celebrating books, this is an appropriate image. In fact, watching this production is a little like reading a book; scenes are often short. Their length and the quick lighting transitions that follow suggest the reading and turning of a page.

Speaking of books, piles of them rest on different parts of the set, perhaps suggesting that Dorothy’s world – and our own – is filled with books.

Lighting designer Thomas Shorrock works with bright hues that make the set look not clinical, but inviting. The brightness reinforces Dorothy’s bright, optimistic outlook. When the characters break the fourth wall and talk to us, the lighting is much dimmer, producing shadows and practically leaving the stage dark. This is appropriate, considering that the piece is like a memory play.  Similar to The Glass Menagerie, we get a sense that the characters are telling this story from a certain vantage point. “Sometimes it is a place from which Zan speaks to the present and remembers the past,” the playwright notes in her script. While the hospital room is “well defined,” the other space is “soft and amorphous…defined only by space and light.”

Parts of the set are dark. They combine with greyish costumes, which Dawn C. Shamburger designed, to reinforce the story's seriousness.

Also, behind the scenes, Matt Corey’s sound design includes seemingly realistic sounds. Also, to Corey's and the actors' credit, the performers are easy to hear and understand.

Dorothy’s Dictionary is a compelling play that deserves a long theatrical life. Unquestionably, it will make you appreciate life more, and see people and perhaps yourself in a different light. Quality live theater has the power to do that and so much more.

Dorothy’s Dictionary runs through Dec. 11 at Theatre Lab, located on Florida Atlantic University’s campus in Boca Raton. Performances are at 7:30 p.m. Thursday-Saturday, and 3 p.m. Sunday. Ticket prices range from $20 to $45 for adults. For more information and tickets, go to https://fauevents.universitytickets.com. For specific directions, call (561) 297-6124.