Masterful One Acts by O'Neill and Beckett 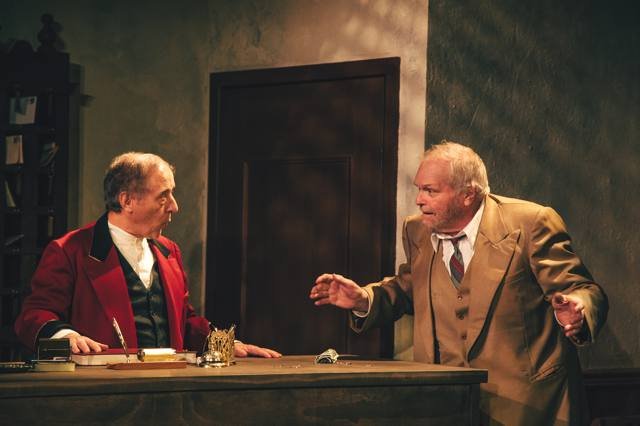 There’s good things happening again at LA’s premiere Westside theatrical venue The Geffen Playhouse.  Change and/and or progress, however, can come at a cost; regret, and pain.  But change and growth are part of the human journey be it theatre, or the world of business, or just anywhere.

With the arrival of Matt Shakman, as the Geffen’s new artistic director, there’s been a surge in energy and excitement which bodes well for the two complex – The Gil Cates Main Stage, and the intimate Audry Skirball – theatre in the future.

Actor Brian Dennehy is currently presenting a Master Class in acting with his one-man presentation of two One Acts: Eugene O’Neill’s “Hughie” and Samuel Beckett’s obtuse “Krapp’s Last Tape”.  For O’Neill lovers, Dennehy’s performance is the embodiment of what O’Neill must have grappled with all his life.  The alcohol fueled highs and lows and their disappointments.  It all resonates with working class societies.

In “Hughie”, Dennehy fleshes out the now ‘golden days’ of Erie Smith, a life-long professional gambler who has come to New York City in the summer of 1928, to pay his respects at the funereal of his closest friend Hughie.

The lives of itinerant gamblers are akin to gypsies. They’re always moving on. Winning big here and losing it big there. Their lives are an on-going series of feast or famine experiences and memories. It’s those memories and stories that then become the currency that allows them to eke out a bleak existence before leaving this mortal coil.  O’Neill, gifted as he was suffered terribly from depression in his youth and family-life.

Dennehy is a legendary interpreter of O’Neill. I guess it’s the Irish gab in them that is the bond that allows Dennehy to channel our first Nobel Laurette Eugene O’Neill so brilliantly.  His pacing and timing is the key in the performance that keeps the audience fully engaged for almost an hour – which whizzes by.

The story unfolds in the lobby of a small hotel that has seen better days.  Actor Joe Grifasi turned in a little gem of a performance as the sad-sack night clerk the evening I attended (November 15th).

He alternates the role with actor Armin Shimmerman.

To non-actors, it appears that the night clerk has little to do or say. 90 percent of the dialogue is spoken by Dennehy. However, actors who play this type of supporting role have to be constantly engaged with what is being said on stage, yet appear to be a casually going about the business required for their role.

Grifasi has performed the role with Dennehy for four years and the two actors have plumbed their roles respectively, which is why this bittersweet and poignant one act play is so effective and enjoyable to watch. It makes one think about their own lives long after the play is over.

It’s Dennehy’s play, no doubt about that.  But as good as Dennehy is, and he’s very good, the seamless directorial hand of Steven Robman adds to the professionalism in these two impressive pieces.  He applies it ever so lightly; making it so much more effective.  It’s a classic case of less is more effective than too much.  Well done by all three gentlemen.

The second piece in this play of two one acts is Samuel Beckett’s obtuse ‘theatre of the absurd’ play “Krapp’s Last Tape.” Here Dennehy’s affinity for Beckett’s POV is a bonus.  The play centers around a series of Krapp’s tape recordings he has preserved of his thoughts and his impressions of his life which are stored in rooms in his lodgings.  As the play opens Krapp is seated center stage and staring vacantly at nothing in particular.  All of his inner thoughts play out on his face in subtle on-stage movements. There is a tape recorder at one end of the desk.

He decides to retrieve something from his desk drawer.  A half a dozen bananas. He carefully peels and places one banana in his mouth and begins eating it and then another, until three are consumed. All these actions are performed in mime taking about 15 minutes in all.  We could believe we are at the Commedie Francaise, perhaps, watching a Moliere comedy. No dialogue, all action mimed.

The performance is a masterful study on how to solve the Beckettian riddle of what or who is waiting in “Waiting for Godot”, and why Krapp is so unhappy and irritated to understand the absurdity of his life before he leaves the planet. Alas, to this day we still don’t know where we came from, why we’re here, or where we’re going.

Beckett, of course, wrote all his plays in French first and then had them translated into English to be performed. Dennehy is an acknowledged fan of Beckett, which accounts for his many character performances in Beckett plays.  In “Krapp’,” we feel his frustration in his inability to cope.  If one is not on Beckett’s wave-length, it is difficult to become engaged as an audience.  If all efforts to better understand Beckett fail, look at it this way …”we’ll always have Paris.”  Everyone understands what that expression means. Perhaps Beckett did too.

An evening with Brian Dennehy performing “Hughie”, by Eugene O’Neill, and “Krapp’s Last Tape”, by Samuel Beckett, is a treat for audiences of the absurdist genre.

The Two One Acts starring Brian Dennehy is an impressive production that perform on the Audrey Skirball intimate theatre stage at the Geffen Playhouse, and runs through December 16, 2018.