To Fall in Love 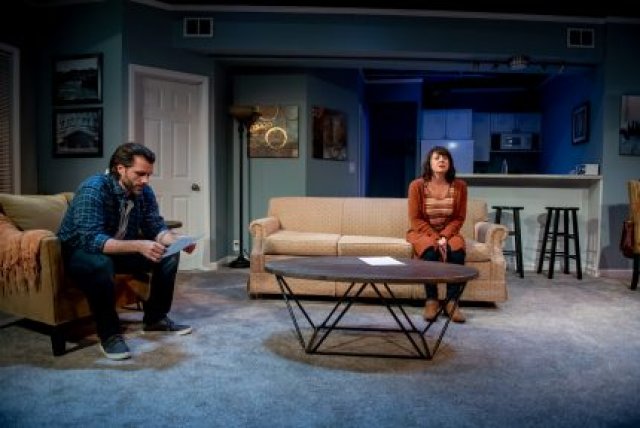 Photo by Julia Rose Photo For much of "To Fall in Love," Wyatt Grimes (Matt Stabile) and Merryn Thomas (Niki Fridh) struggle to connect.

Can a study that scientists claim makes people fall in love actually help save a marriage splintered by tragedy?

That is the question at the center of To Fall in Love which, at times, can seem contrived. However, the piece is a quietly affecting, relatable, humorous, and multi award-winning drama by California-based playwright Jennifer Lane.

The taut two-hander is receiving its Southeastern premiere in a moving production at Theatre Lab, the professional resident company of Florida Atlantic University in Boca Raton. The production runs through Dec. 12 in Theatre Lab’s intimate playing space.

To Fall in Love might have impressed the Greek philosopher Aristotle. Namely, the play takes place over the course of a single day, in a single location, and features one main action.

Specifically, we find ourselves in the pre-furnished apartment of Wyatt Grimes. We presume the time period is the present, but Lane never specifies a year or locale. Perhaps this was a conscious decision to emphasize the universality of the situation in which the characters find themselves.

Sometime in the past, Wyatt and his wife, Merryn’s 5-year-old son, Jacob, died in a car accident while carpooling with another family. That tragedy has caused the couple to split. However, as the play begins, Merryn has responded to Wyatt’s plea for her to return to his house so that the couple can attempt to salvage their relationship.

Somewhat implausibly, to save their marriage, the couple has turned to a study by psychologist Arthur Aron and others. “To Fall in Love With Anyone, Do This” involves 36 questions that Aron and others claim can accelerate intimacy between two strangers (http://36questionsinlove.com). Each person asks the other these questions. However, it is a stretch to believe that a couple would use this study to repair a relationship broken by a tragedy.

While the couple’s chosen method to reunite might raise or lower an eyebrow or two, their intent is an admirable one. Undoubtedly, many can relate to the couple’s situation and what they intend to do about it. And Lane makes us care by having created two likable people who have experienced every parent’s worst nightmare.

Due to its simple plot and short running time (90 minutes with no intermission), To Fall in Love might sound like a simple play. Yet, the piece, without judging its characters or offering easy answers, explores the complexities, nuances, and subtleties of human beings, of relationships, of loss and mourning, tragedy’s effect on relationships, as well as the path to healing.

Certainly, not everyone takes the same path. For instance, embracing close relatives might comfort some people who are grieving over the loss of a loved one. Then, there is Merryn. Re-uniting with Wyatt will not work for her, she explains, while expressing her reluctance to stay with him.

In short, Wyatt makes her happy, and “I cannot be happy in a world without my son,” she tells Wyatt. “The world isn’t supposed to shine for me anymore. You make it shine.”

Speaking of shining, the performers excel at making their characters come to vivid, believable life. And the performers deftly use periods of silence to establish tension, moments of intense feeling, and a character's internal emotions.

In lesser hands, Merryn might have come across as a thoroughly unlikable, self-pitying, depressed, and bitter person. But award-winning South Florida actress Niki Fridh injects Merryn with nuance and a touching vulnerability. Clearly, Merryn, as Fridh embodies her, is not comfortable in her estranged husband’s apartment. Her eyes dart and blink, she tenses her shoulders, moves around frequently, folds and holds her arms as though she is trying to regain control of herself and her situation. But Fridh also injects Merryn with enough charm and warmth when necessary. To her credit, Fridh makes it all look natural. And she sounds as though she is saying the character’s words for the first time.

Meanwhile, Theatre Lab Producing Artistic Director, Matt Stabile, plays Wyatt with restraint. Whereas Fridh’s Merryn is high strung, Stabile imbues his character with an understated charm and easygoing manner that makes him endearing. However, the man is only human, and Stabile invests him with annoyance and exasperation when his estranged wife frustrates him. Even so, Stabile makes it clear that underneath the frustration and annoyance is a sincere desire to re-connect with his wife, and a sincere love of their late son. However, during the beginning, it is a bit hard to hear Stabile.

Louis Tyrrell, Theatre Lab’s founding director and scholar, fluidly directs and deftly stages the production. For example, he places the performers in positions that suggest they want to reconnect but cannot…quite…do so. It is as though two people are pulling their arms in opposite directions. Up until the characters embrace, the closest they come to each other is sitting on the same couch. However, an empty space separates the couple. Also, credit Tyrrell and the performers for not venturing into melodrama. During the reviewed performance, one could hear a periodic clicking noise that served as a distraction. Hopefully, that issue gets resolved.

Merryn’s feelings for Wyatt are complex, to say the least. One moment, she says that she would trade his life for that of her son in a heartbeat. Yet, during another moment, she claims she loves Wyatt so much she wants to crawl inside his skin.

When the couple embrace, we’re convinced that they love each other. Part of the credit for this must go to intimacy director, Nicole Perry. Her job is to facilitate scenes involving physical touch. An intimacy director is a position that is growing in numbers. To read a feature about the position, go to https://theatricalmusings.com/theater/creating-scenes-of-intimacy-safely-seamlessly-and-convincingly-on-stage.

Perhaps more familiar to audiences is the job of scenic designer. In this case, Michael McClain designed the realistic-looking set. There is a tasteful elegance to Wyatt’s apartment, which features colors such as white, brown and gray. Paintings hung on the wall lend the set an elegance.

Meanwhile, Nick Chimienti’s realistic lighting illuminates the set and actors, and focuses them.

To Fall in Love is a tightly focused, smartly written play whose ending offers no definitive answers about anything the play covers. In the end, the playwright leaves us with much to ponder.

At the very least, you might hug your loved ones a little tighter and longer after seeing To Fall in Love.

To Fall in Love runs through Dec. 12 at Theatre Lab, located on Florida Atlantic University’s campus in Boca Raton. Show times are 7:30 p.m. Thursday through Saturday, and 3 p.m. Sunday. For tickets, or to inquire about Theatre Lab’s exact location, go to https://fauevents.universitytickets.com/w/event.aspx?SeriesID=332 or call (561) 297-4784. To watch a trailer, go to https://www.fau.edu/artsandletters/theatrelab.