A Great Way to Introduce Kids to Theater 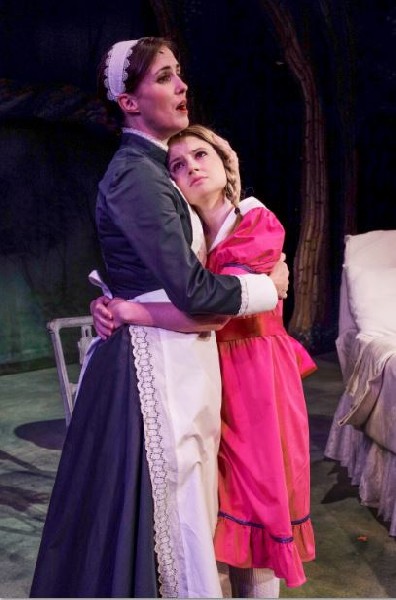 Hold On, photo by Richard Lovrich 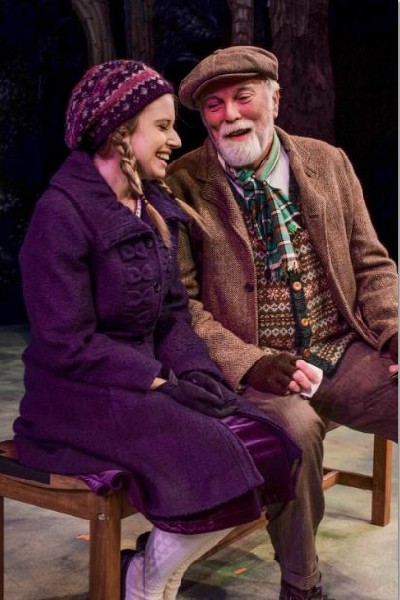 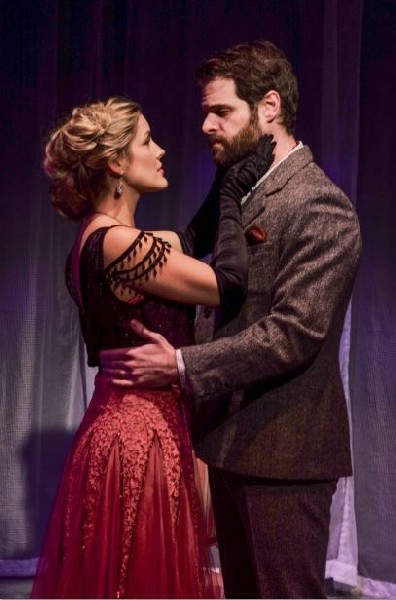 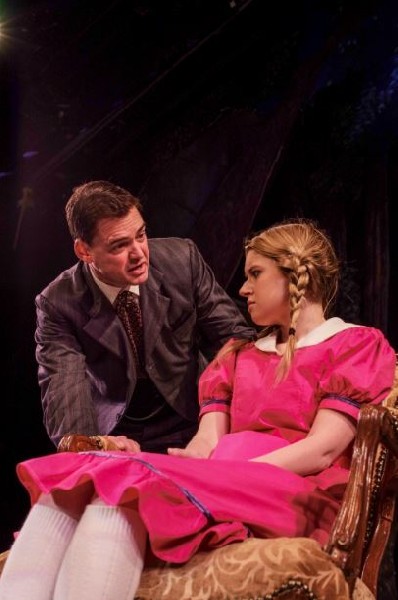 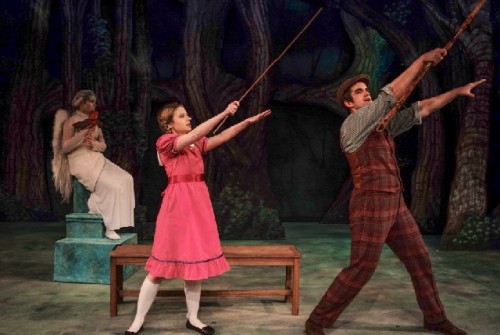 With its memorable euphonious melodies, The Secret Garden has been an audience favorite for years.  How wonderful that Cap Rep has decided to lower its age limit for audience members from 10 to 6 for this particular production.  And the house was indeed filled with generally well-behaved children.

Perhaps with this in mind, this production deals less with character complexity and more with the spectacle of the musical from a child’s point of view.  The set design is mainly cartoon-like tree cutouts that are slid by stage hands to create different pathways.  There are a few moving panels and a hidden treehouse where Lily would sit- no sign of a garden wall.

Sometimes a gauzy white curtain swings across the stage to effect a change of space and projections were used to help orient the audience.  If not the most smooth of transitions, it was at least used effectively in Mary’s dream sequence where she sings “The girl I mean to be” while arranging the ghosts from her past for a photo shoot. The small ensemble is used well throughout the piece as reappearing ghostly portraits, as guardian angels over childrens' beds or as garden statues who hold lanterns or who puppet dance a papermache Robin- a favorite for the kids, and a contrivance born with grace by the ever game Elliot Lane (Dicken) who has to risk that bird upstaging him during most of his numbers.

In this production, director Maggie Mancinelli-Cahill chose to direct in the actor/muso style where the multitalented cast comprises the majority of the orchestra and plays with their instruments on stage.  This fun performance type can certainly enhance the experience, but it is a balancing act between keeping the quality of the music top shelf and showcasing the muti-tasking abilities of the company.  In this case, it seems that Cap Rep choose to hire fewer pit musicians and rely instead on the onstage company to carry it all without much backup.  Sometimes this was interesting: the reduced orchestration for the brief overture was charming and lively with a guitar, three piece string section and flute, played with gusto by the cast of supporting characters.

This charm held for a while, but in the larger company numbers, the sparsity of the orchestra and cast was laid bare.  When all singers are onstage, with sometimes only one voice per part and no time to grab an instrument, or perhaps no way to really sync with the backstage conductor except a fuzzy monitor or to tune with only two violins, we are left with only a synthesized keyboard sound to build what should be key transition moments (the arrival at the house, the storm, the finale).

It was a letdown when the formidable Leenya Rideout performed Martha’s first number in full mic’d belt with only an unplugged acoustic guitar on which  to accompany herself.  Her talent would have been better served if she had had a larger sound backing her or had she had her mic toned down for balance.  “Hold On”, her showcase in the second act, was a much more satisfying number.

Another example of the directorial balancing act that worked was to have Rideout playing the Robin’s song in the shadow of the stage on a pennywhistle because it underscored her role in helping to create a magical healing space for Mary.  But it was harder to suspend disbelief when the sour Mrs. Medlock, portrayed by the capable Rita Dottor, randomly enters playing an excellent fiddle and wearing a welcoming smile on her face.  We can’t help but wonder- is this housekeeper schizophrenic?  Her shifting dialect did not help matters.

Mollie Vogt-Welch, a highlight of the show, played a quintessential Lily, sung steadily and sincerely without artiface.  Fred Rose, (Dr. Neville Craven), sang with a full easy baritone and had possibly the best characterization on stage.   Archibald Craven (Cole Burden) had an uneven performance, both in voice and interpretation, and yet he managed to bring it in the moments that counted, including a stunning rendition of the duet “Lily’s Eyes”.   Brittany Ross, while older, was still well suited to playing Mary Lennox and it was nice to hear a strength in that character’s voice that can sometimes be lost when cast younger.

The downside of her performance is that she was too often the shrill brat.  There were rare moments when we caught a glimpse of the sweeter, injured girl under her tough and angry persona and playing to such a one-sided interpretation endeared Mary’s character less so to the audience.   Still, Ross gave a fast-paced, consistent performance and there was an apparent bond between her and the young Colin (Aiden Fecko, in this case) which allowed their relationship to bloom quite easily on stage.   Other characters of note were the gardener, Ben, played by local favorite, Kevin McGuire, and Mary’s mother and father, played by Alexander Jones and Betsy DeLellio, all excellent musicians and consummate performers.

In sum, this fresh take on The Secret Garden was a good try by an adept cast.  The little girl sitting next to me was oblivious to all faults and completely caught up in the performance, which marks the choices here as a success.

The Secret Garden, playing through December 21, Tuesday through Thursday at 7:30pm, Friday and Saturday 8pm, Saturday matinee 3pm, Sunday and Wednesday matinees 2pm.  Kids under 10 allowed at the matinees only.