Me and My Shadow in San Francisco 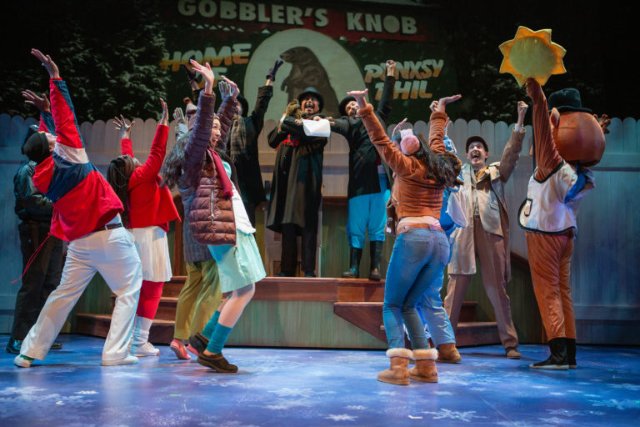 “Practice makes perfect.” Haven’t we all been goaded on by this adage, whether shooting baskets or playing piano? Repetition. Repetition. Repetition. But what about hitting the reset button time and again until we get it just right and then saving perfection as the final cut? Based on the movie of the same name, Groundhog Day has become almost synonymous with time looping, and the story has become one of the most endearing in the world of fantasy. The stage play jiggers the plot a bit, making the lead character less a schlep and more a small-time Romeo, as well as including some darker elements.   It also adds an upbeat musical score, which together with clever story, provide rewarding entertainment.

For the three or four of you out there who don’t know, the premise of Groundhog Day is that Pittsburgh TV meteorologist Phil Connors is assigned to cover the annual event against his wishes. His displeasure multiplies manifold when he finds himself waking each morning to yet another Groundhog Day in Punxsutawny, PA.

One tricky aspect of time-looping stories is how much repetition to have, and how much change in each successive episode. Groundhog Day gets the formula right, with enough change in each iteration for the concept to remain funny. Another challenge for a play based on a movie is how to compete with the budgetary and artistic advantages that the movie has. In this case, the immediacy of live performance adds to the liveliness as does the music, bouncy with pop and rock stylings and an occasional reflective ballad.

Of course, the actors of the central characters must be able to carry the day, and Ryan Drummond as Phil certainly does. With a history as a professional voice actor (most notably as the video game icon Sonic the Hedgehog), the mock gravity of his stentorian voice in the weather spots is spot on. But in addition, he has a fine singing voice.

More importantly, he must, and does, convince us playing a character whose personality reveals more sides than a house of mirrors reflects images. In the early stages, Phil offends with his arrogance and condescension. He doesn’t like anyone or anything associated with Punxsutawny. Later, it’s easy to feel some sympathy for him when he hysterically wakes with frustration every morning in the time loop, but he gives back the sympathy as he realizes that he can manipulate the scenarios to his benefit. He figures that if he’s going to have to relive this day, at least he can do it somewhat on his own terms. Phil’s ensuing troubled period evokes understanding, but to no one’s surprise, he comes out the other end a better person – caring and loving.

Rita Hanson, who produces his on-location weather reports, becomes his love interest. Like most of the secondary characters as well, her part could use more dimensionality, as she acts mostly as a foil to Phil. However, she is played by Rinabeth Apostol, who, when she is on, is irresistible, exuding charm. It’s hard to see how Phil didn’t fall in love with her from the start. Perhaps she suffered a bit from opening night jitters, but Apostol did seem a little uncomfortable at times. However, she is a fine performer and singer, and no doubt, that will be worked out in future performances.

Acting in the supporting roles is uneven, yet small gems come from the players of some of those roles. Dean Linnard screams dorkiness as the fast-talking dynamo insurance salesman Ned Ryerson, a former classmate who Phil runs into. Sophia Introna is comely and vivacious as Nancy, a one-night stand. Yet, her later return to the action doesn’t add anything to the narrative arc in a musical that is pretty long already. Nonetheless, each of these players delivers a poignant and well sung solo.

Dave Dobrosky’s musical direction contributes a bright sound, essential to the feel of the play. From the opening number “There Will Be Sun,” the effort pays off as the sound of the chorus is superbly arranged and delivered. While the leads carry most of the singing load, the funniest song with somewhat anomalous beautiful harmonies is “Nobody Cares,” sung by drinking buddies Gus and Ralph, played by Scott Taylor-Cole and Jorge Luis Diaz. The opening lines of “I wake up hungover; I go to bed smashed; Like an alcoholic hamster; On one of them little wheely things,” should be enough to indicate where it’s going.  One minor defect in the musical component is that the band occasionally overpowers the singers.

Edward T. Morris’s scenic design covers a lot of territory with numerous changes. The centerpiece that makes it all work thematically is the revolving stage ring that is used to put Phil on a symbolic treadmill each morning. The whole production is brought together by Susi Damilano’s crisp direction and her assembling a creative team of some of the top designers in their categories.  Those not mentioned so far are choreography by Nicole Helfer, costumes by Abra Berman, lighting by York Kennedy, sound by Teddy Hulsker, and properties by Jacquelyn Scott.

Groundhog Day had a somewhat abbreviated Broadway run, and its rollout to regional theater has been rocky, with this being its first production since The Great White Way in 2017. San Francisco Playhouse’s confidence in the musical is well warranted given the company’s ability to provide quality resources to make it work.

Groundhog Day with book by Danny Rubin and music and lyrics by Tim Minchin is produced by San Francisco Playhouse and plays on its stage at 450 Post Street, San Francisco, CA through January 18, 2020.