Mother of the Maid by Jane Anderson 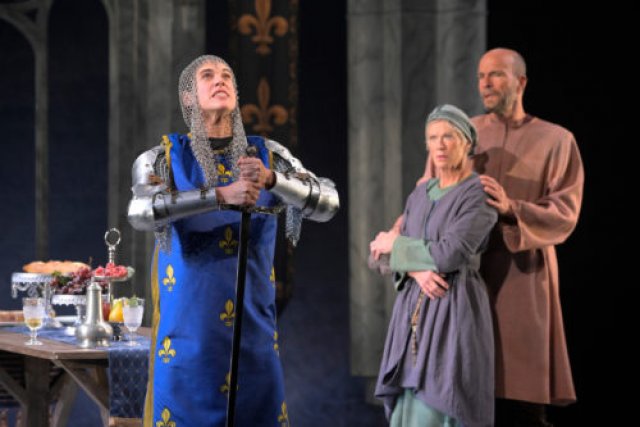 The deeds of most Roman Catholic saints are unknown to the general populous. Not so with Joan of Arc. Her brief but glorious ascent to greatness and swift demise are well known. Claiming to have experienced saintly visitations that demanded that she lead French armies against the English, she persuaded King Charles VII in 1429 to allow her, a teenage female, to lead French troops into battle. Against great odds, she succeeded in turning back the enemy in multiple forays but was captured and put to death at a burning stake in 1431.

Joan’s story reigns prominently in Western culture. In literature, she has been represented by lions – Shaw, Schiller, Anouilh, Brecht, and even Mark Twain, who considered his little known biography of her to be his best work. Operas of her exploits have been composed by Rossini, Verdi, and Tchaikovsky. Many movies about Joan have been produced. So, the valid question is “Do we need another play about Joan of Arc?”

Playwright Jane Anderson successfully takes on the challenge. Somewhat interrelated reasons that could be behind her decision are that each new generation represents a fresh audience that may not be imbued with the history in question; that each new generation views history through its own special lens and deserves its own interpretation; that instilling the storytelling with a new voice offers a new perspective on the events; and that painting on a larger canvass offers different perspectives on the subject.

The playwright’s contribution to the Joan of Arc literature is that her mother, Isabelle Arc, becomes the voice and the central character. Thus, while Joan’s actions are of historic significance and drive the narrative, Isabelle dominates the stage time. The play centers on family relationships, especially between mother and daughter. While our interest in Isabelle is not as an important figure herself or as mentor to Joan, we come to understand in her the love and sacrifice of a parent for a child, even when the child rejects much of what the parent stands for. We encounter Isabelle’s evolution in feuding with Joan, supporting, defending, succoring, and ultimately redeeming her child’s legacy. This thematic arc doesn’t need a Joan of Arc to have poignancy.

Sherman Fracher plays Isabelle. Although her slight build and fine features would hardly pass as a prototypically 15th century peasant, her part as the loving mother is universal in time and place, and she embraces it with open arms. As Isabelle, her physical and verbal energy explode, and her dynamic movement keeps the stage from falling stagnant. We believe her devotion right to the end when she provides soothing comfort to her doomed daughter even in the face of the daughter’s hostility.

Joan is deftly portrayed by Rosie Hallett, not as a dreamy-eyed, gentle mystic, as might be expected of a saint-to-be. Rather, she expresses strong will and teenage petulance. Hallett convinces in her determination that no person or church will stand between her and her God-given mission, no matter how inconceivable it seems. She loses patience and erupts in her insistence. And bloodied and beaten in her final hours, she even rages against a God who fails to let her fulfill her destiny.

It would be unfair to not at least mention the other actors, because it is an esteemed cast. Scott Coopwood as Jacques Arc, Joan’s father, excels as a dark, cynical, domineering figure who demands the most of his family but gives great love in return. Brennan Pickman-Thoon as Joan’s brother Pierre who accompanies her to battle; Liz Sklar as the Lady of the Court who acts as emissary to Isabelle when she walks to Paris to be with Joan; and Robert Sicular as clerics and a scribe are all worthy.

A conundrum faced in producing theater representing different eras and characters who would have spoken in foreign languages is how to depict the language. In Mother of the Maid, an odd mix of modern American idiom with bits of Anglo-Irish vocabulary like da (for father), shite, and arse are used to good effect, but occasionally, a contemporary phrase such as “good to go” screeches with dissonance.

Although the narrative suffers some slow periods, powerful moments fully redeem the drama under Jasson Minadakis’s direction.  Fine staging enhances the overall effect, especially aided by Sean Fanning’s scenic design. In early scenes, the interior of the Arc home reveals a tangle of raw wood, set fully down stage to create a sense of claustrophobia. When the action moves to palatial Paris the stage and lighting dramatically open to the fullest, first with white walls and outlines of Gothic architectural features creating a sense of grandeur.

Mother of the Maid is a dramatic experience that humanizes the exalted and provides a rich tapestry of complex familial relationships that show in a profound way how conflict and love often exist side by side. It may be noted that the chatter after opening night included the occasional naysayer who either felt that they had seen enough of this topic or they “knew the ending,” which saps the suspense. Perhaps theater goers with those concerns should be a little wary. On the other hand, the SFBATCC (Critics Circle) has already voted it a “Go See.”

Mother of the Maid is written by Jane Anderson, produced by Marin Theatre Company, and plays on their stage at 397 Miller Ave., Mill Valley, CA through December 15, 2019.