Say It Ain't So Joe 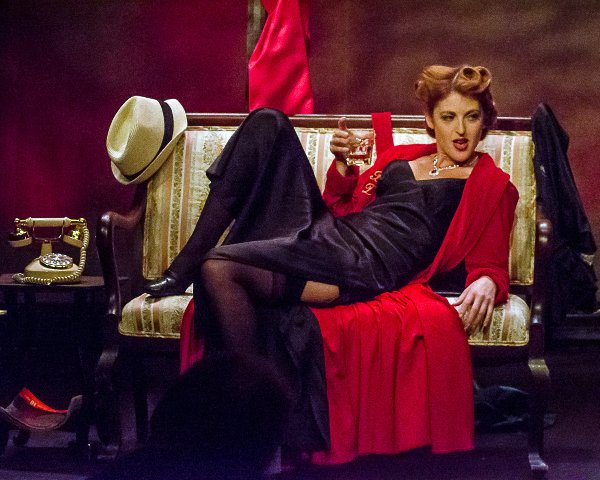 Of all the celebs channeled by drag queens and female impersonators, Bette Davis, like flies to honey, has always been at the top of every performers list. Her mannerisms, her clipped New England cadences, her famous lines like “fasten your seatbelt this is going to be a bumpy ride,” and the forever dangling cigarette in her airborne hand, like the actress herself, are legendary.

Nevertheless, not until actress Jessica Sherr penned her one woman show, Bette Davis Ain’t For Sissies, has anybody dared to give us a wildly exciting, action-packed recounting of Bette Davis’ life as a young aspiring actress hellbent on becoming a star.

Sherr’s journey began some twelve years ago in acting class when her assignment was to play a famous person. Looking around for a subject, being red-headed herself, Lucille Ball first came to mind.

However, after years of being stopped in the street by strangers telling her that she resembled a young Bette Davis, seeing this as a sign, Sherr dropped Lucille like a hot potato and turned to Bette Davis, another strong independent woman.

After digesting several biographies, Davis’ two autobiographies, countless movies, and customary trips down Google and Wikipedia Lane, Bette was quickly embraced by Sherr, and the rest is history.

For the past ten years, ever expanding the show’s length, from 28 minutes to 60 minutes to its current 90 by adding new content, Sherr has been performing Bette Davis Ain’t For Sissies to great acclaim.

Riding on the crest of Davis’ iconic fame, wherever the play appeared, be it at the New York Fringe Festival or the Edinburgh Fringe Festival where she appeared for three consecutive years, the play sold out.

So popular were her Edinburgh performances – 25 back-to-back shows over a period of a month – audiences had to be turned away. It was the same at the St James theater in London, and various venues around New York City and across this country. In Chicago alone, her 4-week run garnered her 16 critical thumbs up reviews.

Wanting to up her game, Sherr started to scout around for a director in 2019. Settling on Drama Desk Winner Karen Carpenter (Love Loss and What I Wore, Harry Townsend’s Last Stand). Their sole aim was to ready the play for an Off-Broadway New York Theatre Production.
To this end, this past February an industry presentation in which some sixty producers showed up took place. Interest was high, and another meeting was scheduled for March. And then Covid-19 came to town and everything came to a halt.

But Sherr, like the ever-tenacious Davis, was not about to stop performing. After several outdoor performances at Central Park this past September and October, Sherr began to perform her show weekly this past April on Facebook Live from her bedroom. Eventually she hooked up with StellarTickets.com, an online platform for monetizing live stream events.

Miracles of miracles, without a set, fancy lighting, props, her usual five costume changes, or the freedom to roam a stage, while sitting at a desk (that you never see) Davis is brought stunningly alive.

I might add that the Bette Davis estate loved both Sherr and her script and gifted her with Davis’ own red scarf, 2 pairs of gloves, a handkerchief and a pair of earrings, pieces of which Sherr uses in every show, “I am sure that Bette loves seeing this.” Sherr tells us during her performance.

‘Ain’t For Sissies’ opens during the 1939 Oscar presentation at the Coconut Grove in Hollywood. The 31-year old Davis had been nominated for Best Actress in Dark Victory. With the press having leaked the winners in advance, knowing that Vivien Leigh is going to win the Best Actress Award for Gone With The Wind, Davis hightails it home.

“I extricated myself,” the feisty Davis tell us, “as I knew that if I saw Vivien Leigh win, I’d pull her hair out."

What follows is 90-minute, breathtakingly delivered fusillade of intimate and exciting face to face flashbacks and flash forwards, both happy, sad, and frequently laughter-provoking.

Along the way, covering the years of 1908-1963, we hear, in confession-like detail about her four marriages, her three abortions, her two Oscars, her three children, her 18-year stint at Warner Brothers, various studio suspensions, her Hollywood Canteen days, and her What Ever Happened Baby Jane (1962) comeback in which she was cast opposite Joan Crawford, her long-time rival for both the same men and movie roles.

We also are made privy to her life-long friendship with Olivia de Havilland, her various friendships with the famous, Bogart was one, her affairs with Howard Hughes, George Brent, Franchot Tone, and the self-admitted greatest love of her life William Wyler (1902-1981), under whose direction Davis won her 2nd Oscar for Jezebel (1938).

Some of the most wonderful story-telling moments – with no holds barred – are Sherr’s Davis talking about the process of filming and her frequent tumultuous relationships, both on and off screen, with the directors of her films; some famous, others obscure. We actually get teasing snippets beautifully acted out by Sherr, word for word, from The Petrified Forrest, Jezebel, and Dark Victory.

Peppered throughout the play are number of Davis’ smile-inducing observations. Talking about being at the Oscars she tells her mother, “If I saw more mink, I’d vomit in Joan Crawford’s lap. And I don’t think she’d notice.”

Talking with Olivia de Havilland, who had just lost the Best Supporting Actress Award for Gone With The Wind to Hattie McDaniel, Davis sallies forth with, “I love Hattie McDaniel, but a woman that large should not be covered in gardenias. She looked like a parade float.”

Online may be an entirely new platform for the Sherr, but with her impeccable timing, Sherr, a great actress herself, nails every one of Bette Davis’ whirlwind chameleon-like mannerisms, facial expressions and emotions, from ecstasy, to sadness, to anger and back. It is a totally mesmerizing performance, with much thanks to the camera’s use of vintage Hollywood Close-Ups, which brings Sherr’s Davis to us gloriously so, front, center, and straight into our hearts.

Breaking News! Not letting any grass grow under her feet and on to her next project, Sherr is looking to produce her award-winning feature film script, Bette, that she co-wrote with Caitlin Scherer.