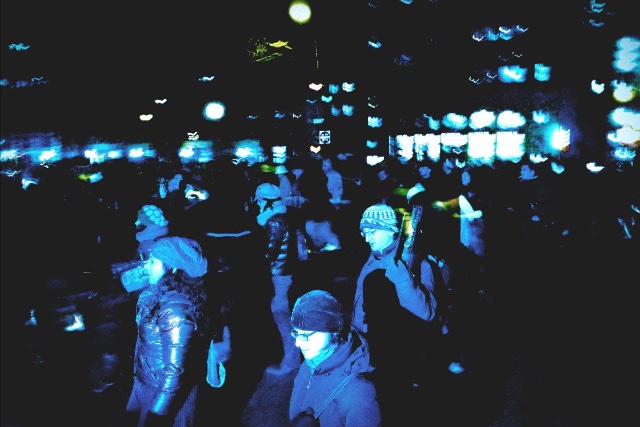 — the original winter soundwalk —
celebrates its 30th anniversary in NYC on Sunday, December 18 at 6pm

while more than 40 cities around the world,
from Northern California to the South of France,
present Unsilent Night throughout December

The magic begins when the crowd hits PLAY,
collectively launching streams of shimmering electronic bell-tones
into the night, as the "orchestra" sets off joyously on foot
(or bicycles, as done in San Marcos)

Where: This free community event, an annual Berkshires tradition since 2014, starts and ends at the Adams Visitor Center at 3 Hoosac Street. We'll explore the cavernous echoes and reverberations of downtown Adams and the newly renovated Adams Theater. The walk begins promptly at 6:00 PM, but participants are encouraged to gather beginning at 5:30 PM.

Children and adults of all ages are warmly invited to join in this free and festive family-friendly event. Participants are encouraged to dress warmly, bring a flashlight or lantern, bring a boombox, phone, Bluetooth speaker, or other creative amplified sound device (the louder the better), and revel in the co-creation of this inviting holiday soundscape.

A limited number of Kline’s vintage boomboxes and tapes will be available for use on a first-come, first-served basis. All participants are encouraged to think creatively about sound amplification, bring their own boomboxes or other sound-making devices (the louder the better!), and to prepare a cassette tape, CD, or download the mp3 or Unsilent Night app before arriving. The tracks are available at unsilentnight.com/download.

Adams! There are more than 30 other cities doing Unsilent Night with you. Share photos and videos of yours with the rest of the worldwide community.