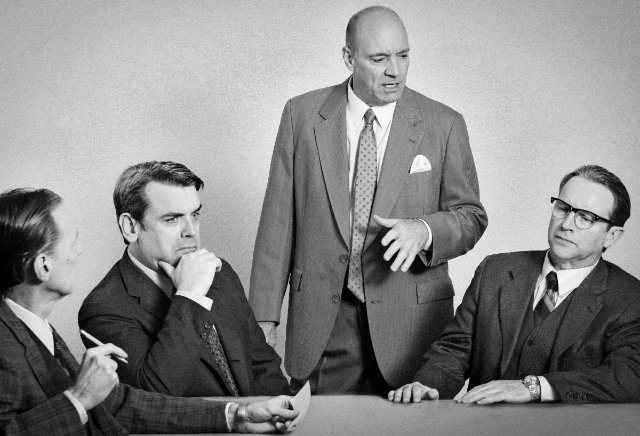 During the 35 years that Tom Wahl has been a professional actor, he has portrayed such diverse characters as a U.S. Senator, a drag queen, a mayfly, an embryo, a space alien, a serial killer, and God.

Now, he will step into the role of one of 12 jurors tasked with deciding whether a man is guilty of killing his father. If jurors find him guilty, he will receive a death sentence.

More specifically, Wahl is a key member of the cast of Palm Beach Dramaworks’ (PBD) upcoming production of the courtroom drama, 12 Angry Men.  The production opens on Dec. 9. And it continues through Dec. 24 at PBD, a professional, nonprofit regional theater company on Clematis Street in West Palm Beach.

12 Angry Men, by Reginald Rose, takes place during the 1950’s in New York City. The play’s basis is an Academy Award winning 1957 film with the same title. It stars Henry Fonda as Juror #8. Wahl will portray that role in PBD’s production.

Initially, 11 jurors vote to convict the accused – except for Juror #8. He has doubts about whether the suspect is guilty. As the play progresses, the feelings, attitudes, and prejudices of each juror come to light as they weigh the evidence, debate, and argue whether the suspect is guilty. Each juror has his own opinions based on their personal histories and circumstances.

“The strengths and flaws of the American jury system are laid bare – as are the prejudices and social attitudes of those standing in judgement,” according to promotional material from PBD.

The play premiered in London in 1964. It took an additional 40 years for the play to make it to Broadway – two years after Rose’s death in 2002.  Rose originally wrote 12 Angry Men for the prestigious anthology show, Studio One, in 1954.

PBD’s production of the award-winning play takes place during the Eisenhower era in 1954. That is the year that the much-acclaimed teleplay premiered.

The play "deals with many issues, including racial justice,” Wahl said. “The play could have been written today. Not much has changed.”

Wahl said that audiences can expect “a great night of theater with a high stakes, life and death drama. It really is great storytelling.”

The play’s intention is to “ask people to question how and why they feel a certain way before jumping to conclusions and making judgments,” Wahl said.

Although during the 1950’s the law permitted women and people of color to serve on juries in New York, the jury pools were overwhelmingly comprised of white men – and, subsequently, so were juries.

“Rose very deliberately made the choice of an all-white, male jury, and PBD is following his lead,” reads promotional material for the production. “Producing Artistic Director William Hayes and director J. Barry Lewis believe that the makeup of the jury serves to illuminate the fervid battle for gender and racial equality in America in 2022, and illustrate(s) how far the country has and hasn’t traveled in the 68 years since the teleplay premiered.”

Behind the scenes, the scenic design is by Victor A. Becker, costume design is by Brian O’Keefe, lighting design is by Kirk Bookman, and sound design is by Roger Arnold. David A. Hyland is the fight choreographer.

This production will not mark Wahl’s first experience with Twelve Angry Men. He played Juror #2 in a production in Upstate New York during the mid-1980’s.

“I still have my script from that production,” he said.

12 Angry Men also does not mark Wahl’s first experience with the court system. Several times, he received a summons for jury duty, but was released. Recently, he served on a jury deciding the monetary penalty after the trial of a civil age-discrimination case.

“I think at first, I felt like most people that it was an inconvenience and didn’t really want to do it,” Wahl said. “But, once selected, there was a real sense of duty and honor to be a part of our judicial system. I took it very seriously.”

Now, Wahl and his fellow performers and behind the scenes artists are preparing to serve on the fictional jury in 12 Angry Men.

“We’ve been very busy with rehearsal,” he said.

The veteran and versatile actor said that 12 Angry Men presents the same production challenges that other plays do.

“With any play you always want to make sure that you’re telling the story very clearly and as you think the writer intended,” Wahl said. “That’s especially true with a courtroom drama or a mystery where there is a lot of information to share and lots of plot twists and turns. We work on this from day one until the final performance.”

Of the many roles that he has portrayed, does Wahl have a favorite? Is there a part that he is itching to portray?

“There are so many great plays with interesting roles that I don’t really have dream roles or bucket list roles,” Wahl said. “My favorite role is always the one I’m currently playing.”

PBD’s production of Twelve Angry Men will open on Dec. 9 and run through Dec. 24, with specially priced previews on Dec. 7 and 8. Showtimes are 7:30 p.m. Wednesday and Thursday, 8 p.m. Friday and Saturday, and select Sundays at 7:30 p.m. Matinee performances are at 2 p.m. Wednesday, Saturday, and Sunday. Tickets for all performances are $84, except for opening night ($99) and previews ($64). Student tickets are available for $15, and anyone under 40 pays $40 (no additional fees) with a photo ID. Tickets for educators are half price with proper ID (other restrictions apply). To purchase tickets, call the box office at (561) 514-4042, ext. 2, or buy tickets online 24 hours a day at palmbeachdramaworks.org. The theater is located at 201 Clematis St. in West Palm Beach.