Contextualized with Works by Cy Twombly 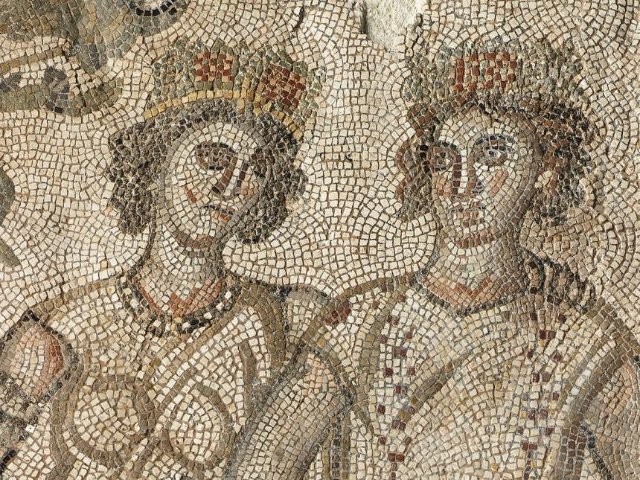 BOSTON (December 1, 2021)—The Museum of Fine Arts, Boston (MFA), is unveiling an ambitious transformation in the George D. and Margo Behrakis Wing for Art of the Ancient World: five reimagined galleries for the art of ancient Greece, Rome and the Byzantine Empire that tell new stories about some of the oldest works in the MFA’s collection. Filled with natural light, the newly renovated spaces feature innovative displays, interactive and digital experiences created in partnership with local and international collaborators, and immersive evocations of an ancient Greek temple and a Byzantine church. Each of the nearly 550 featured objects—ranging from the beginnings of Greek art (about 950 B.C.E.) through the fall of in the 15th century and into the present day—was researched, cleaned and conserved prior to going on view. Many are on view for the first time or after a long period off view, including the recently conserved Monopoli Altarpiece and a colossal seated marble sculpture of a goddess. Narratives throughout the galleries provide fresh perspectives on an era that provided inspiration for our own modern society and examine contemporary issues through the art of the past—posing questions about community, the role of religion, and why the mythical world is an enduring source of fascination, then and now. The galleries will debut to the public on Saturday, December 18, a day of free general admission for all.

“We are pleased to open our galleries after a period of almost two years, and share new perspectives on many objects, some on view for the first time in a generation. Our challenge was to take one of the great collections of ancient art in the world, and create a context for understanding and appreciation amongst audiences today,” said Matthew Teitelbaum, Ann and Graham Gund Director. “From colossal to miniature, and realized in a range of materials by artists and artisans from many countries and cultures, the galleries are filled with reflections on the founding concepts of democracy, civic leadership and religious community. They make direct connections between the art of the past and a range of vibrant concerns today. It is exciting to create narratives that respect the past while anticipating the ways ideas connect to the future.”

The MFA’s collection of Greek and Roman art is one of the finest and most comprehensive in the world. The major renovation and reinstallation project has created a grand entry to these holdings, with three galleries exploring Greek and Roman mythology, early Greek art and Roman portraiture. The suite also includes a new gallery devoted to art of the Byzantine Empire—the first of its kind in New England—and a gallery for rotating installations that explore how modern and contemporary artists interacted with art of the past. The inaugural installation features sculptural works by American abstractionist Cy Twombly (1928–2011), on loan from the Cy Twombly Foundation, and an important painting by the artist that is a promised gift to the Museum.

The five new galleries build on the transformative renovation of seven additional Classical galleries since 2009—most recently, “Daily Life in Ancient Greece” in 2017; “Homer and the Epics,” “Dionysus and the Symposium” and “Theater and Performance” in 2014; and “Ancient Coins” in 2012.

Bathed in natural light, this grand gallery has been designed to evoke the atmosphere of an ancient temple, introducing visitors to Greek and Roman art through one of its most important and popular subjects: mythology. The MFA’s beloved 13-foot-tall Juno (late 1st century B.C.E.)—the largest Classical statue in the U.S., weighing 13,000 pounds—anchors the space, which also features depictions of other Olympians from the Museum’s collection and The Hope Hygieia (about 130–161 C.E.), a marble six-foot-tall sculpture of the goddess of health on multiyear loan from the Los Angeles County Museum of Art (LACMA). Thematic groupings of artworks explore the gods’ varied personalities and complex realms, as well as religious practices and myths that were so central to people’s lives and beliefs in ancient and .

The MFA’s staff worked in collaboration with the Boston-based company Black Math on a digital reconstruction of a marble sculpture of Athena Parthenos (2nd or 3rd century C.E.) on view in this gallery. An augmented reality experience available on the Museum’s free MFA Mobile app enables visitors to see how ancient Romans may have seen the goddess—in color. The process, which involved scientific analysis and multispectral imaging performed by conservators, is showcased in a behind-the-scenes video featured in the gallery.

As successor to the Roman Empire and the first Christian realm, the (330–1453) both preserved Greek and Roman culture and ushered in innovative forms of art and architecture that responded to the new Christian beliefs and practices. This gallery’s design was inspired by ’s most important contribution to sacred architecture: centrally planned churches with soaring golden domes evoking “heaven on earth,” most perfectly realized in the of in . The space also features a soundscape of liturgical hymns, reflecting what might be heard during weekly Eastern Orthodox services. The gallery—located in between the MFA’s classical and medieval European art galleries—and the nearly 190 artworks it houses reflect the transition from paganism to Christianity and the point where East met West. Among the highlights is the monumental 15th-century Monopoli Altarpiece (Virgin and Child with Saints Christopher, Augustine, John the Baptist, Stephen, Nicholas, and Sebastian), on view at the MFA for the first time following a three-year conservation treatment.

In this gallery, visitors can explore the beginnings of portraiture in Western art history and the role it has played in constructing and maintaining identity—from the past to today. More than mere records of appearance, Roman portraits are visual constructions, combining likeness, character and social status in images that are compellingly human. The 40 objects on view, including depictions of emperors and everyday individuals of all ages, illustrate the range of applications for Roman portraiture—from historical documents and propaganda to artworks used in domestic, funerary and civic spaces.

Early Greek art, dating from the end of the 10th through 5th centuries B.C.E., is a major strength of the MFA’s collection. This large gallery featuring more than 200 objects introduces two key developments in Geometric and Archaic art—new ways of depicting the human body and the birth of storytelling—exploring them chronologically and demonstrating how the achievements of the Classical period were rooted in these innovative earlier periods. It also demonstrates the tension between local and regional visual identities in Greek art during this period and the integration of new ideas and technologies acquired through trade and colonization.

Newly enhanced with a heightened ceiling, the gallery demonstrates the monumentality of early Greek architecture with a display of two original frieze blocks from the 6th-century at Assos, which depict Herakles with centaurs and sphinxes. This rare example of Greek temple architecture in a art museum is accompanied by a brand-new digital reconstruction of the original site as well as a projected backdrop of newly recorded footage by Turkish videographers of the archaeological site at Assos.

The gallery also debuts the MFA’s first-ever animated film, How to Make an Athenian Vase, produced in partnership with Zedem Media, an animation studio based in . The video brings to life the development of black- and red-figure painting that can be seen in the MFA’s rare vase by the Andokides Painter—one of only about 55 such objects in the world to showcase both techniques.

A gallery of modern and contemporary works located within the wing explores the reception of ancient art by 20th- and 21st-century artists. The first of the multiyear rotations features the works of the modern master Cy Twombly (1928–2011), an alumnus of the School of the of in , who drew inspiration from Greek and Roman art, myths and poetry. Il Parnasso (1964), an early important painting by the artist and a promised gift to the Museum, is joined by three bronzes and two original plasters on long-term loan from the Cy Twombly Foundation. Twombly’s connections to the art of the past will be further explored in an upcoming exhibition organized by the MFA and the J. Paul Getty Museum. Cy Twombly: Making Past Present will be on view at the Getty Center from August 2–October 30, 2022 and at the MFA from January 14–May 7, 2023. The exhibition is accompanied by an illustrated catalogue, available now from MFA Publications.