La Traviata at the Lyric Opera of Chicago 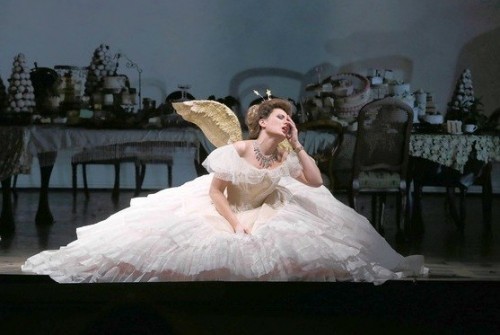 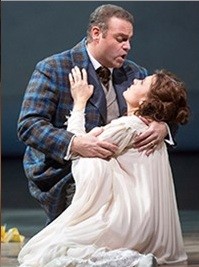 Calleja and Rebeka, Made for Each other. 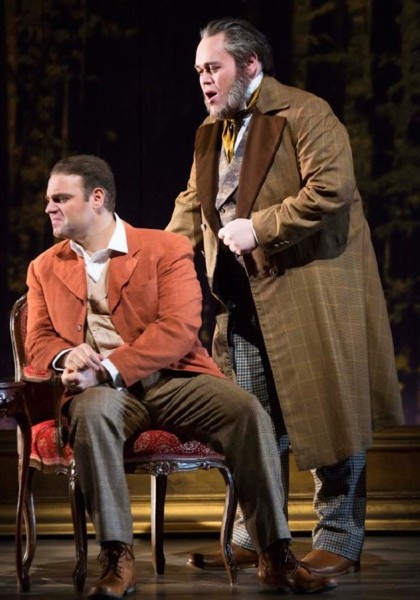 Quinn Kelsey in break through role convincing his son that position is more important than love. 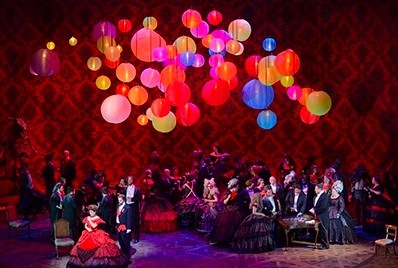 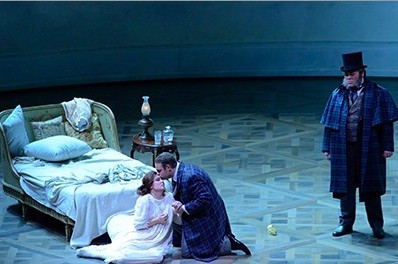 Under General Director Anthony Freud, the Lyric Opera is transforming opera for the 21st century. Coming seasons will be increasingly General Manager Anthony Freud’s own creations and should be fascinating to watch unfold.

In striking contrast to the Metropolitan Opera in New York (with rare exceptions brought in from other company’s even though the financing may be shared), the Lyric presents a fresh take on an opera without in any way violating the composer’s intent.

More important, because opera is the music, and particularly the singers, casting is done both with an eye to the appeal and appropriate casting of a talent and an ear for the blending of voices in ensemble singing.

For the title role in La Traviata, Freud boldly cast the dramatic coloratura Marina Rebeka. Most often we hear lyric sopranos who suit Act I but do not give the combination of force and delicacy required for Act III.  Hearing Rebeka’s clarion tones, all in perfect pitch with spot on attention to the decorative trills and runs Verdi provides, was thrilling.

A consummate actress, who is beautiful to boot, Rebeka takes on what, in her early career in Latvia and also on the continent, is a signature role, Violeta. It is unlikely that she can hear her own voice on stage as it comes up and over and out, filling the house.  With her country people Antonenko, Opolais and the brilliant young conductor Andris Nelsons, who Boston was able to capture, one ponders the genetics of Riga.  Or is something in the town’s water?  What comes out into the world from Latvian music is extraordinary.

Joseph Calleja is proud of a career he has made on his own.  He made his stunning Lyric debut in the role of Alfredo and reprises it now with an added richness. While the breath and vocal chords collided a bit at this performance, he has a stunning vibrato and a passionate tone and demeanor.  In tandem with Rebeka or Quinn Kelsey, in a break through performance as Emilio Germont, the textural mix of the voices was delicious to hear.

Like the Parsifal production, a true marvel in its capacity to entice for five hours, this Traviata is a feast for the eye. A French lace curtain, almost demure, covers the entire stage at the opening.  Behind it, during the overture, Violeta’s maid ties the stays in her corset as she prepares for this night’s party.

The curtain brushes back to reveal the action in a party room, the table groaning under the weight of pastries and bon bons, including Ladurée cones of macaroons.  (Literary star Ladurée did not found his bakery until 1862, and the real Violeta died in about 1847, but peu importe!)

Rebeka’s crinolines are red, and her bustle has more volume than anyone else’s, perhaps because what is hidden beneath is both well-known and premier.  Tiny angel’s wings fluttering off her back suggest her golden heart and also that she may be exiting this earth soon, which is of course the arc of the story that accompanies love found and lost and found.

When Alfredo sings offstage, his figure is a shadow against the curved walls of the party room. Shadows will be picked up again in the party and gambling scene that sets the second part of Act II.

Act II, like Willy Decker’s brilliant production, has a few indicative pieces of furniture.  But Riccardo Hernandez chooses to use the country as a backdrop, projecting very tall plain trees whose color changes as different spots bathe the trunks.

For all of the pleasures of the scenes and costumes and lighting, they never distract from Verdi’s music and the performances. Director Arin Arbus makes the point that in opera music comes first, and her direction confirms this sense. (Arbus has done workshops at Williamstown).

Opera directors will tell you that if you can get a singer to move to the music your production will succeed.  Arbus delivers much more.  Only occasionally, in an unusual blow struck in Act II and the somewhat messy freeze frames at the end of acts, did her bold choices seem too difficult for the singers to execute.  The demands of singing are so great that care must be taken with other demands.

The show is Rebeka’s, but another standout performance is Quinn Kelsey’s as Germont pere.

Kelsey first cropped up on our horizon as Sharpless in the City Opera production of Madama Butterfly.  Everyone came to attention when he was one stage. Now his voice has developed a rich darkness in addition to its clear tones. It is beautifully shaped and delivered in service of the emotional life of a man desperate to save his family’s reputation, but struck and felled by the courtesan with a heart of gold.  This is a perect role for Quinn, masterful and confident.  Bravo.

The Lyric Opera orchestra has never sounded better under the subtle and attentive baton of Massimo Zanetti.  The pace was brisk, but both orchestra and singers responded perfectly and the audience seemed to enjoy it.

The Lyric is the only opera company in the country to have earned an A1 rating from Moody’s.  Was it granted after attending performances like this one?